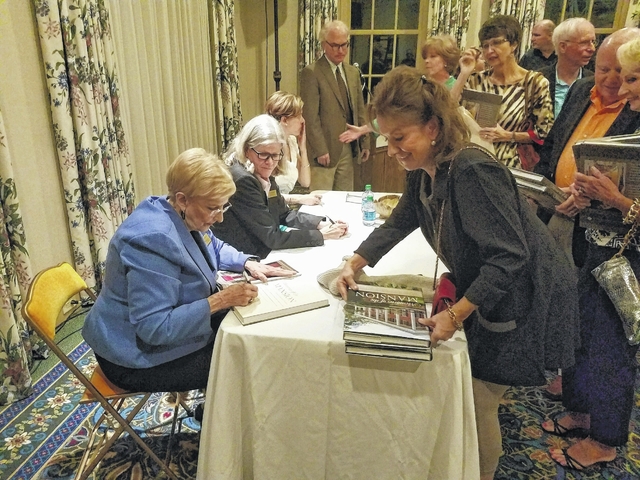 Georgia Gov. Nathan Deal’s wife, Sandra Deal, made an appearance at the Hills & Dales Estate Tuesday evening to discuss details of her new book, “Memories of the Mansion” which was written by Deal, Jennifer Dickey and Catherine Lewis, who are both from Kennesaw State University and were experienced authors before working on this project.

“When I first moved into the mansion, I was just curious about everything that went on,” Deal said. “I found out that we were the eighth governor’s family to live here and many of the history on the families were not recorded, so I began the need to seek more information about the families. I wanted to talk with all the families – old and new – to get their stories about living in the mansion and all the interesting things that happened there. I felt like their story needed to be told and that’s what we did for this book.”

The book consists of 12 chapters covering the complete history of the Georgia Governor’s Mansion, from its reopening in 1968 to present time.

Alongside with the first lady Tuesday were the co-authors of the book.

After refreshments, the three authors engaged in a back-and-forth dialogue where each shared their personal thoughts and feelings about the development of the book. Deal also shared some of her personal stories while living in the mansion, as well as some from the mansion’s former occupants.

Lewis wanted to “reclaim the lost history at the Governor’s Mansion” and said they conducted more than 150 interviews that included members of the first families such as the Busbees, Carters, Barnes, Perdues, and the first family to live in the mansion, the Maddoxes.

Dickey spoke to the audience about the lengthy history of the mansion dating back to the early 20th century, and what she called the “bad maintenance and bad shape” that the original mansion was in that led to the construction of the newer mansion in 1965. The official opening of the current mansion took place Jan. 1, 1968.

Deal said her goal is to have the book placed in every public school and public library in Georgia.

“Memories of the Mansion” was published in 2015 by the University of Georgia Press and, so far, the book has had three printings.