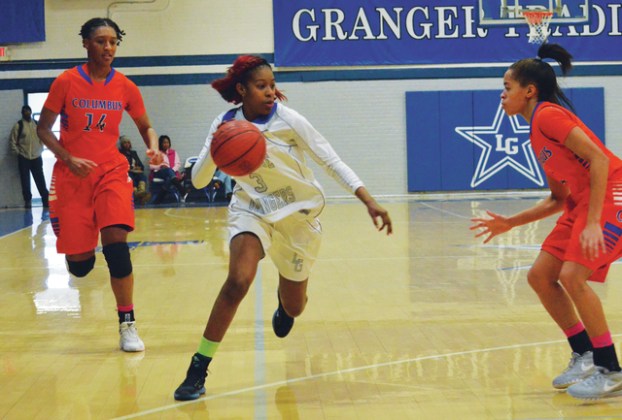 LAGRANGE – It was all going their way.

The LaGrange Grangers surged to a 17-0 halftime lead in last week’s game against the Cedartown Bulldogs, and they appeared poised to move to 2-0 in region competition.

Then came the third quarter.

LaGrange’s first three possesions of the second half resulted in turnovers, and Cedartown turned each of them into a touchdown to take the lead.

Now, LaGrange has the challenge of going on the road and facing the top-ranked Cartersville Purple Hurricanes, who have won 21 consecutive games and have blown each of their six opponents out this year.

In its two region games, Cartersville has beaten Cedartown 44-6 and Central-Carroll 59-9.

Cartersville’s most competitive game came in the season opener when it beat another defending state champion, Allatoona, 30-14.

Cartersville, with all-state quarterback Trevor Lawrence leading the way, has won its other five games by at least 31 points.

That’s what’s confronting the Grangers tonight, and head coach Dialleo Burks has encouraged his players to embrace the challenge.

“We’re getting ready to go face Goliath,” Burks said. “They’ve just got to insert themselves and compete. You do that, you never know what can happen.”

The Grangers had hoped to waltz into today’s game unbeaten in the region, and it looked like they were heading in that direction after the first half of last week’s game.

With senior quarterback LaPerion Perry making his season debut, LaGrange scored a pair of first-half touchdowns and also got two points on a safety to build the 17-0 lead.

“We were rolling,” Burks said.

The second half was all Cedartown, though.

With Perry out of the game, LaGrange’s first three possessions of the second half ended with two lost fumbles and an interception, and Cedartown took advantage of those breaks to put the ball in the end zone three times and take the lead.

Cedartown added another touchdown in the fourth quarter to go up by 10 points, and LaGrange couldn’t answer.

“The first half, it was what it was,” Burks said. “And the second half was the worst that we could play.”

Burks said at some point in the second half, someone needed to step up and make a play to stem the tide, but it didn’t happen.

“You have to have a short memory of things that happen,” Burks said. “At crucial points of the game, we need guys to stand up and say, let’s go. That’s the players’ time. The players have to handle that. We have to get it together out on the field. The same stuff we did in the first half, was the same stuff we did in the second half. And what was the difference? We got shut out on offense, and on defense we gave up 27 points.”

It was a disappointing setback, but the Grangers have to shrug it off and focus on the key closing stretch against some strong teams.

LaGrange’s next three games are against Cartersville, Troup and Sandy Creek, teams with just three losses between them.

LaGrange finishes the regular season against another quality opponent in Chapel Hill.

It helps that the Grangers are as healthy as they’ve been all season.

Perry, who had a phenomenal 2015 season that ended with him securing all-state honors, missed the first five games while recovering from offseason hip surgery.

Perry sparked the offense, leading the Grangers on some impressive drives, and he had a 10-yard touchdown run.

Another key Granger, linebacker James Clark, will return for today’s game, which should help the defense in its bid to slow down Lawrence and the explosive Cartersville offense.

“We got LaPerion back, we’ll get James Clark back this week,” Burks said. “So that’ll be everybody. We’ve got little nicks and bruises, but nothing that’s major.”

With Perry back, LaGrange’s offense figures to present a major challenge for opposing offenses.

Senior Amad Ogletree is a strong runner who had more than 100 yards in a win over Central-Carroll, and fellow running back Cornell Kendrick is having a solid junior year.

Kendrick had a touchdown run against Cedartown, and he got a lot of his yards in that game while dragging defenders on his back.

“He does have the ability to do it,” Burks said. “This is his first year doing it. More and more, we give him the ball and he gets comfortable.”

Sophomore Jamari Thrash is LaGrange’s top play-maker at wide receiver, and Bo Russell has had some explosive plays in the passing game as well.

DeAndre Pollard and freshman Andy Boykin are the tight ends.

“Up front, we controlled the line of scrimmage (against Cedartown),” Burks said. “We had 18 pancake blocks. So we were pushing people around. We just have to take care of the football, and you can’t get penalties.”

On defense, LaGrange’s defensive backs, including seniors Jalen Wilson and Deanthony Rache,l will be put to the test tonight.

Burks’ hope is that defensive linemen Olajubutu, Pollard, Rico Dunn and Lamarcus Brown can get pressure on Lawrence and make him uncomfortable.

“We’ve got to make him move around, throw on the run, and we’ll see where it falls,” Burks said.

LaGrange’s Jordan Ragan gets ready to snap the ball during last week’s game against Cedartown. LaGrange’s offensive line will have its hands full against a strong Cartersville defense tonight. Kevin Eckleberry | Daily News

http://lagrangenews.com/wp-content/uploads/sites/37/2016/10/web1_LHS1-3.jpgLaGrange’s Jordan Ragan gets ready to snap the ball during last week’s game against Cedartown. LaGrange’s offensive line will have its hands full against a strong Cartersville defense tonight. Kevin Eckleberry | Daily News

LAGRANGE – The Troup Tigers, on the heels of a huge road win over Sandy Creek, are closing in on... read more