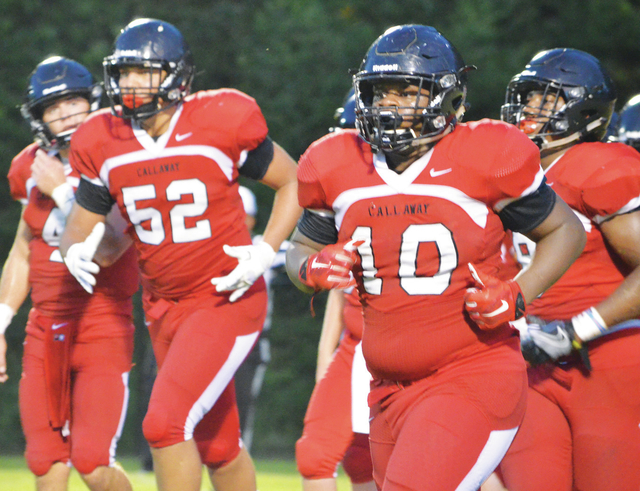 Callaway’s Jibrell Jackson is a versatile player, and he’s a key member of the offensive and defensive units.

Jackson’s primary contribution to the team is as a fullback, though, and while he has carried the ball occasionally, his main job is to clear a path for the running backs.

It’s a job he embraces, and one he’s really good at.

“He does a solid job at fullback,” Callaway head coach Pete Wiggins said. “He’s like having an offensive lineman in the backfield. He’s one of the most physical kids we’ve ever had.”

Wiggins said Jackson “can really set the tone offensively as far as being a lead blocker.”

Callaway junior running back DJ Atkins has run for more than 800 yards in five games, and oftentimes he’s following the block of Jackson.

“He sets the tone for our offense,” Callaway running-backs coach Matt Neighbors said. “We run that iso and power, and you know what you’re getting from the get-go.”

What defenses are getting is a 240-pound player with a quick burst who rarely loses a one-on-one battle with a defender.

Jackson clears a path, and Atkins bursts through the hole and, more often than not, rips off a big gainer.

“It’s a lot of fun,” Jackson said of playing fullback. “I know I’m helping DJ get down the field, and I’m helping the whole team get better.”

Jackson is also an effective ball carrier himself, and he has three touchdown runs this season.

Jackson is also a standout on defense from his linebacker position, although his time is a bit limited on that side of the ball because of his offensive responsibilities.

Wiggins said Jackson is the ideal teammate whose only concern is helping make the team better.

“He’s very smart. He understands the game,” Wiggins said. “He’s a great leader on the field, too. He doesn’t say a lot, but he always works hard.”

Neighbors said part of the way Jackson leads is by being willing to accept hard coaching.

“You just give him the business, and he’ll say OK coach,” Neighbors said. “He’ll just keep going. He’s such a great kid.”

Jackson joined the Callaway program in 2013, and while he didn’t play that season, he was a part of a team that won a region championship and reached the state semifinals.

Jackson started getting significant playing time as a sophomore, and he was a starting linebacker last season.

When Jackson arrived at Callaway, he learned a lot from fullback Devon Rosser.

“He helped especially with the blocking and stuff,” Jackson said. “He told me to just keep on working, and do whatever I have to do to get better.”

Jackson is now returning the favor as he helps the other fullbacks learn the ins and outs of the position.

“I try to help them out, and show them the things they can do to get better,” Jackson said.