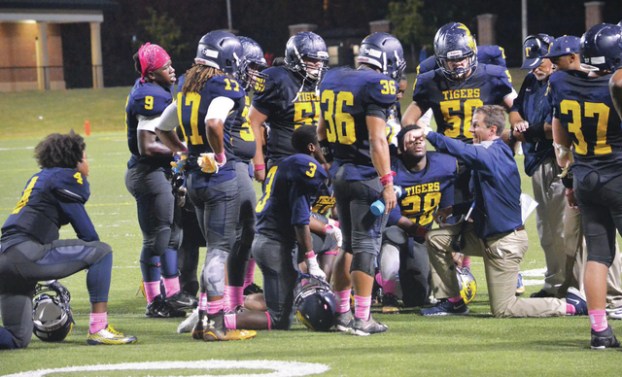 LAGRANGE – On the heels of an epic road win, the Troup Tigers are taking a week off.

Troup, which beat fourth-ranked Sandy Creek 28-20 last week, is off today as it prepares for the home stretch of the season.

When Troup returns to action next week, it will play arch-rival LaGrange before closing the regular season with games against Cedartown, Central-Carroll and Cartersville.

Troup enters its off week tied for first place in Region 5-AAAA at 2-0 with wins over Chapel Hill and Sandy Creek.

Since dropping its season opener to Hardaway, Troup (5-1) has won five consecutive games.

“We feel good about where we’re sitting,” Troup head coach Tanner Glisson said. “We’re healthy. We’re ready to go. We feel like we’re a good football team. I definitely don’t feel like we’re a flash in the pan.”

Coming off a 1-9 season, Troup hoped to get the season started with a win, but its fourth-quarter comeback bid against Hardaway fell short.

Troup was driving late, but an interception sealed its fate in the 21-14 loss.

“Those things make you stronger, too,” Glisson said. “You have those setbacks, and you go back and coach them hard.”

Troup made its home debut the following week and thumped Kendrick 38-12, and it followed that up with a thrilling, come-from-behind, 28-27 win over Bowdon before closing its non-region schedule with a 47-28 win at Lamar County.

In its region debut, Troup handled Chapel Hill 42-21, and it then dominated the second half en route to the victory over Sandy Creek.

Quarterback Montez Crowe has thrown for 950 yards this season with 10 touchdowns, and six of those scoring passes have gone to Kobe Hudson.

Chanse Hill has two touchdown catches, and Ken Truitt and Macenta Stafford each has one.

Camren Russell headlines the rushing attack with 314 yards and six touchdowns, and Jackson Davis has 231 yards with three touchdowns.

Crowe has added four touchdowns on the ground.

In the win over Sandy Creek, Crowe threw touchdown passes Hill and Stafford, Russell had a scoring run, and Hudson returned an interception for a touchdown.

“It was a very good victory for us,” Glisson said. “And we left there with some things we can do to correct to make us even better. So that’s important.”

The Troup Tigers are off this week, and they’ll return to the field for next week’s showdown against LaGrange. Kevin Eckleberry | Daily News

http://lagrangenews.com/wp-content/uploads/sites/37/2016/10/web1_troup-football.jpgThe Troup Tigers are off this week, and they’ll return to the field for next week’s showdown against LaGrange. Kevin Eckleberry | Daily News

LAGRANGE – The Troup Tigers, on the heels of a huge road win over Sandy Creek, are closing in on... read more