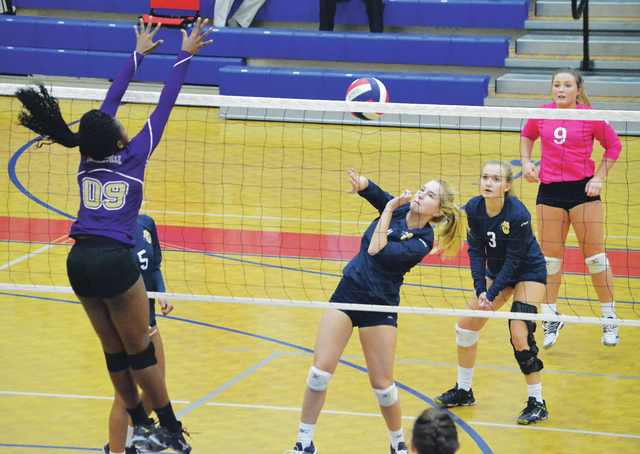 TYRONE – They won’t be at home like they’d hoped, but the Troup Lady Tigers are still headed to state.

Troup faced Cartersville in the semifinals of the Area 5-AAAA volleyball tournament on Thursday at Sandy Creek High, and a win would have secured a home match in the state playoffs

Cartersville ended up winning in three sets, though, knocking Troup down to the number three spot in the area, and it will be on the road for the first round of the state tournament next week.

Despite that dissappointment, it has still been a successful season for the Lady Tigers, and they’ll look to keep the good times rolling with a road win.

Troup head coach Jodi Dowden said her veteran team has no problems playing away from home.

“We have played good on the road this year,” Dowden said. “We went to Cartersville and beat them. We went to Northside and won some games. We played well on the road at Smiths Station. So we’ve put some good road games together. I’m not afraid of getting on a bus and going.”

This is the fourth time in the past nine years Troup has reached the state playoffs with Dowden as the coach, and this is the first time it hasn’t been a four seed.

Troup beat Cedartown on Tuesday in the area quarterfinals to advance to the semifinals and secure a spot at state.

Troup came into the Cartersville match with some confidence because of the earlier win, but the rematch went a different way.

Cartersville survived for a 27-25 victory in the first set, and it won the next two sets 25-19 and 25-15 to get the win and earn a spot opposite Sandy Creek in the area championship match.

Cartersville took advantage of its size advantage at the next, and Dowden said her team didn’t have as much offensise success as it usually has.

“We didn’t swing offensively,” Dowden said. “Usually we get more offensive plays than that. Some of our top offensive players didn’t get quite as many swings as they would in other games. It wasn’t our match. But we’re in state.”

The first set was back-and-forth.

Savannah Laney got the run started with a block, and Bailey Lawson and Akhea Mitchell both had kills before Madi Jeter delivered back-to-back service winners to put Troup on top 22-21.

Jeter then went to the floor to make a nice save on a Cartersville spike attempt, and Troup ended up winning that point to go ahead by two.

It was tied at 23-23 when Troup thought it had won a point, but the officials ruled there was an illegal backcourt attack.

The point was replayed, and Cartersville won it to go ahead 24-23, and it was set point.

The second set was close for awhile.

Troup made a run of its own, and a service winner by Grace Ingram cut Cartersville’s lead to 15-14.

Cartersville answered with five straight points to extend its lead to 20-14, and Troup came no closer than three points the rest of the set.

Cartersville started quickly in the third set, surging to a 11-4 lead, and Troup was unable to keep pace.

Lawson had a block to cut Troup’s deficit to 17-12, but Cartersville finished the set on an 8-3 run.

OF NOTE: For more photos from Thursday’s match, check out facebook.com/LDNsports

Troup head coach Jodi Dowden meets with her players during Thursday’s match against Cartersville in the semifinals of the area tournament. Kevin Eckleberry | Daily News

http://lagrangenews.com/wp-content/uploads/sites/37/2016/10/web1_volleyball1.jpgTroup head coach Jodi Dowden meets with her players during Thursday’s match against Cartersville in the semifinals of the area tournament. Kevin Eckleberry | Daily News

Troup’s Lauren Sheets puts the ball over the next during Thursday’s match. Kevin Eckleberry | Daily News

http://lagrangenews.com/wp-content/uploads/sites/37/2016/10/web1_volleyball6-11.jpgTroup’s Lauren Sheets puts the ball over the next during Thursday’s match. Kevin Eckleberry | Daily News