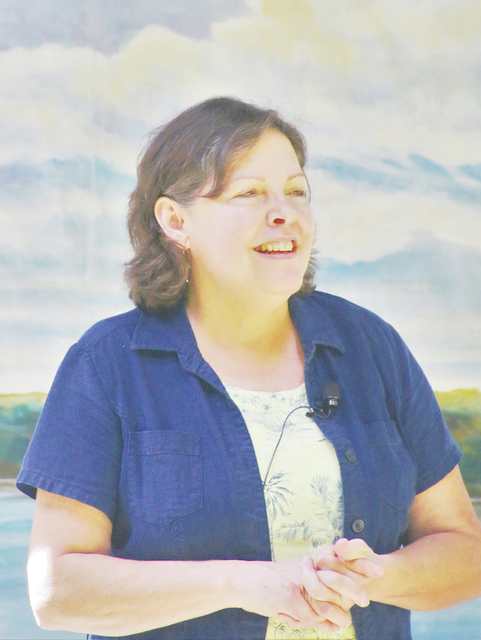 “Tersi and her sister, Carmen Agra Deedy, have visited LaGrange over the years as performers at the Azalea Storytelling Festival,” Plumlee said. “Their stories about being Cuban and growing up in Georgia emphasize the importance of understanding and embracing different cultures.”

Bendiburg was born in Havana, Cuba. When she was 10, her family was allowed to leave post-revolution Cuba with nothing, not even her parents’ wedding bands. They moved to Mexico City to live with a distant relative while her parents applied for political asylum in the United States.

Years later, Deedy, now a professional author and storyteller, encouraged her big sister to do the same.

At first, Bendiburg told stories for free in public libraries. If they liked the program, the only payment she requested was a letter of recommendation. Soon, she began to get offers to tell stories in schools and colleges.

One day in the mid-1990s, five people from Young Audiences showed up at one of her school programs and offered to place her on their roster. Since that time, Bendiburg has performed with Young Audiences in schools all over Georgia, and as a freelance artist throughout the United States.

She believes that sharing stories is an important way of humanizing each other.

“It is more difficult to see another person or culture through stereotypes and misconceptions once we hear that person’s story,” she said.

Stories also help slow us down, she said.

“Active listening to a story, either privately or as part of an audience, forces us to visualize, from our own perspective, what we are hearing. Many times, the stories we hear remind us of our own story and of our common humanity.”

Bendiburg was part of the inaugural Azalea Storytelling Festival with Ed Stivender, Kathyrn Tucker Windham, Betty Ann Wylie and Donald Davis. She also attended workshops led by Davis at the home of the late Pat Gay, one of Azalea’s founders.

“I love LaGrange and am always excited to come back,” she said.

For more information about her appearance, contact Plumlee at aplumlee@lagrange.edu.

LaGRANGE — Detectives with the LaGrange Police Department are investigating an armed robbery at the CB&T bank at 2053 West... read more