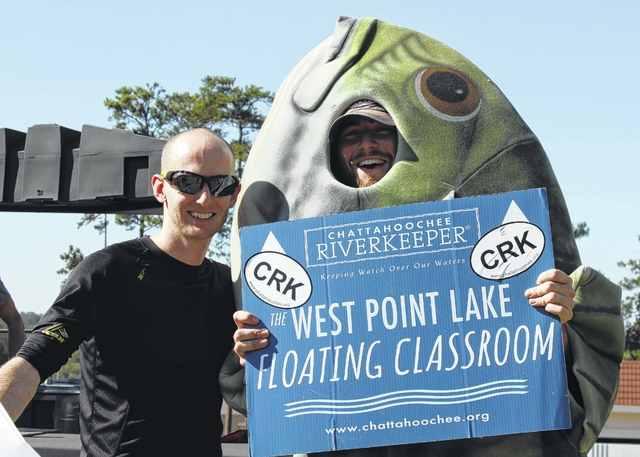 LaGRANGE — Sweetland Amphitheatre was hopping on Saturday at the Craft Beer and Music Festival.

The festival drew a crowd of about 800 people to sample beers made in Georgia and the region. Local beers and brewers took the spotlight at the festival as they offered their beers and their stories.

“We’re the only brew pub in town,” said Charles McLendon, a brewmaster at the Cannon Brew Pub in Columbus. “Everything we make you can buy right there at the bar.”

Most of the more than 100 beers from the festival are available at local stores and restaurants, and the festival gave the community a chance to try these craft beers side by side in hopes of finding a new favorite.

“I started Blue Tarp a few years ago, four years ago come December,” said Tom Stahl, a brewer out of Decatur. “It’s a real tight, small operation. We brought all our (canned beer to the festival). We just started doing cans last year.”

Part of the money raised by the festival went to support the Chattahoochee Riverkeeper programs. The group tests for contaminants in different parts of the Chatahoochee and its tributaries and runs water education programs.

“I’m real excited that Sweetland has organized this,” said Henry Jacobs, the outreach manager for the Chattahoochee Riverkeeper. “It’s helping us get more students on this boat we have and learning about the river.”

The Riverkeeper group has a boat it calls a “floating classroom” that volunteers use to teach students from local schools about the effects of pollution on local wildlife and people.

“It’s an on-the-water education program,” Jacobs said. “We take school groups from all around the area out on West Point Lake and teach them about the importance of clean water and conservation, basic water stewardship.”

While festival-goers roamed from table to table and tent to tent sampling craft beers, bands filled the amphitheatre with an eclectic mix of musical styles.

“I’ve only ever played music for a living,” said Grant Garland, lead guitar and vocalist for the Grant Garland Trio. “It’s what I’ve always wanted to do. … I just met these guys in Nashville, and we just started playing.”

The trio has been performing its blues, funk style together in the last year-and-a-half, and Garland released several CDs on his own previously. The band hopes to perform in Columbus and Auburn in the near future.

“My grandad was my big influence,” Willis said. “He sang gospel. That’s kind of how I got into it, and I know blues is a cultural thing. It really resonated with me.”

Willis is slated to perform at Pure Life Studios in LaGrange Oct. 22.

The amphitheatre was also treated to some “Alabama ghost music” courtesy of the Pine Hill Haints whose ethereal sound made festival-goers stop and take notice, if the quickly filling seats by the stage were anything by which to go.

“Just getting to play to people who might have never heard us (is exciting),” said Jamie Barrier of the Pine Hill Haints. “It’s just fun to play.”

Little Tybee closed out the night with its coastal-inspired sounds that edged the lines between folk, rock and jazz, but even as they played, their thoughts were with people uprooted by Hurricane Matthew, which has caused mandatory evacuations along the coast of Georgia and several other states the last few days.

“Just keep Savannah in your thoughts and prayers tonight,” said Brock Scott of the Savannah-based band. “The weather’s been going down there and wreaking some havoc. Our songs go out to all those folks tonight.”

The next big event at Sweetland Amphitheatre will be Tonic and Driving and Crying in concert as part of LaGrange College’s Pantherpalloza Oct. 21.

Local performer Jontavious Willis shares some of his blues-style music with the crowd at Sweetland Ampitheatre Saturday.

http://lagrangenews.com/wp-content/uploads/sites/37/2016/10/web1_Beerfest1-638-1.jpgLocal performer Jontavious Willis shares some of his blues-style music with the crowd at Sweetland Ampitheatre Saturday.

Alicia B. Hill | For the Daily News

Joshua Madaris, left, and Henry Jacobs enjoy the Sweetland Beer and Music Festival Saturday. Jacobs is the outreach manager for the Chattahoochee Riverkeeper. The group received a portion of the proceeds from the beer festival.

http://lagrangenews.com/wp-content/uploads/sites/37/2016/10/web1_Beerfest2-602-1.jpgJoshua Madaris, left, and Henry Jacobs enjoy the Sweetland Beer and Music Festival Saturday. Jacobs is the outreach manager for the Chattahoochee Riverkeeper. The group received a portion of the proceeds from the beer festival.

Alicia B. Hill | For the Daily News