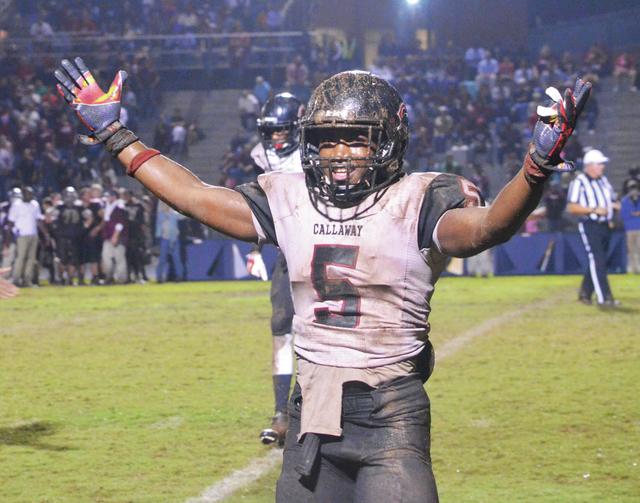 That was not an indication of things to come.

The Trojans gained zero yards on their next two plays and were forced to punt, and that’s basically how the rest of the night went.

Callaway’s defense delivered a phenomenal, dominant performance in a 38-7 road win in a Region 5-AA game.

It was the Region 5-AA opener for Callaway (6-0), which will host Heard County in a huge region showdown on Thursday.

The game was over at the half, with Callaway giving up just two first downs on the way to a 38-0 lead.

While Callaway’s offense was as explosive as usual, the defense had arguably its best showing of the season.

Callaway controlled the line of scrimmage and made things extremely uncomfortable for Lamar County quarterback Malik Collier, who is having an outstanding season.

“I felt like we did a good job of attacking, and really took the game to them,” Callaway defensive coordinator Dusty Hubbard said.

It all started up front.

Terrell, a junior, was seemingly in the Lamar County backfield on every play, and he ended up with four tackles for loss, all in the first half.

“It was one of those deals where he was just getting a lot of penetration,” Hubbard said of Terrell. “There were a couple of times where he got in there and he didn’t end up making a play, but he blew it up. They were just having a tough time blocking him. Jamie Sellers was doing the same thing. He was able to get some penetration. We were just able to change the line of scrimmage on them. Anytime you can do that, you’ve got a good chance at stopping them.”

Linebacker Michael Freeman led the Cavaliers with seven tackles, including two for loss, and like most of his fellow starters, he played little if at all in the second half.

Since Callaway was off the previous week, it had two weeks to get ready for Lamar County, and Hubbard said that was big.

“It helped having an extra week to prepare,” Hubbard said. “We felt real solid in our game plan, and we had it down by the end. We felt like we could execute it, and we did a good job.”

Hubbard said his message to the players was to “just compete on every snap.”

Callaway’s offense wasn’t too shabby either.

The Cavaliers had it all working.

Senior quarterback Dylan Johnson threw a pair of touchdown passes to Braylon Sanders and had a scoring run of his own, and junior DJ Atkins had two touchdown runs.

Callaway had six possessions in the first half, and it scored five touchdowns and kicked a field goal.

On his two touchdown catches, Sanders was well-covered, but it didn’t matter.

On the Cavaliers’ first possession, they faced third-and-long when Johnson threw the ball downfield to Sanders, who went up and grabbed the ball at the 20-yard line.

Sanders raced the rest of the way for the touchdown, and Noah Stephens made the first of his five extra points.

Moments after a long run by Atkins, Johnson threw a jump ball to Sanders in the end zone, and the senior went up and won the one-on-one battle with his defender, and the extra point gave Callaway a 31-0 lead.

Atkins, who ran for more than 100 yards in the first half, produced scoring runs of 10 and 29 yards, and his 44-yard run set up Sanders’ second touchdown catch.

Johnson showed off his running ability with a 30-yard touchdown run with less than a minute remaining in the first half.

Johnson also had a 15-yard run on third down that set up a touchdown earlier in the half.

It was a complete performance by Callaway’s offense, which has been producing nearly 40 points per game.

And it doesn’t hurt to have a standout receiver like Sanders, who is capable of scoring a touchdown on any play.

Stephens did his part in the special-teams department as well with the five extra points, and he made a 27-yard field goal in the first quarter.

The second half went quickly with a running clock, and Callaway head coach Pete Wiggins was able to get everyone some playing time.

Callaway defensive lineman Lichon Terrell gets into the Lamar County backfield, something that happened often during Friday’s game. Callaway gave up just two first down in the first half. Kevin Eckleberry | Daily News

http://lagrangenews.com/wp-content/uploads/sites/37/2016/10/web1_CHS29.jpgCallaway defensive lineman Lichon Terrell gets into the Lamar County backfield, something that happened often during Friday’s game. Callaway gave up just two first down in the first half. Kevin Eckleberry | Daily News