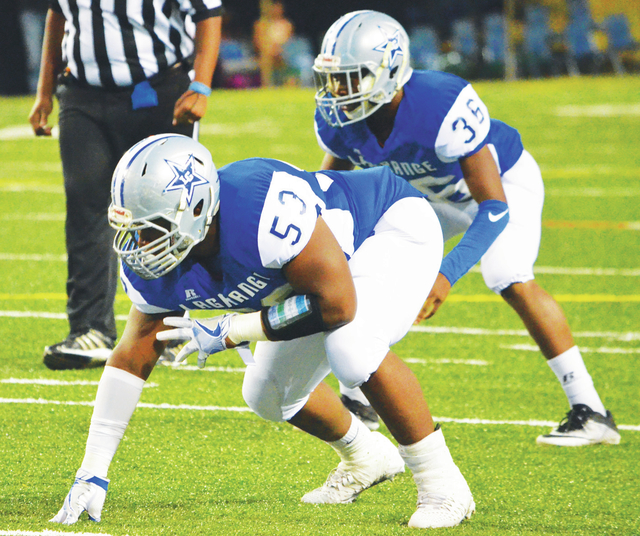 LAGRANGE – For Jonathan Olajubutu, there isn’t a whole lot of down time on game nights.

Olajubutu, a senior on the LaGrange High football team, is a starter on both sides of the ball.

That wasn’t the plan coming into the season, but when a need arose, Olajubutu was there to fill it.

Olajubutu was a stalwart on the defensive line last season, and he was going to be counted on to be an anchor on that side of the ball this year as well.

What Olajubutu wasn’t expecting was that he’d also be a starter on offense.

Early in the season, offensive coordinator Jay Floyd talked to Olajubutu about playing on the offensive line as well.

“Coach Floyd asked me if I wanted to play, and I said yes sir,” Olajubutu said after practice on Monday morning. “I just want to win.”

While most players get a break on the sideline between possessions, that’s not the case for Olajubutu, and he’s fine with that.

“It’s not a big deal,” Olajubutu said. “It’s my last year, so I just want to leave everything on the field.”

Olajubutu has helped solidify things on a veteran offensive line.

Olajubutu is joined in the defensive line by Pollard, Rico Dunn and Lamarcus Brown.

Olajubutu was an impact player on defense a year ago, and he has been so again this year.

As for the offensive line, it’s been all about on-the-job training.

LaGrange head coach Dialleo Burks said Olajubutu has what it takes to be a two-way player, and to succeed in both areas.

“He’s a smart kid,” Burks said. “Of course you know what he can do athletically. Mentally, a lot of guys can’t handle that transition. He’s one who made it well.”

Sam Olajubutu, Jonathan’s uncle, was an all-state linebacker for the Grangers, and he helped the team win a state championship in 2001.

While too young to have watched his uncle play, Jonathan Olajubutu knows what kind of player he was, and he’s very familiar with the proud history of the program.

“It’s a big tradition,” Olajubutu said. “It’s great to be a Granger, with the history they have.”

Olajubutu is hoping to build some history of his own, beginning with what he hopes will be a win over the rival Troup Tigers on Friday.

It’s a game the Grangers (2-5 overall) desperately need since they’re 1-2 in Region 5-AAAA.

“I’m very excited,” Olajubutu said. “It’s a big rival game. But just because it’s Troup doesn’t change anything. They’re the next game on our schedule.”

LaGrange’s Jonathan Olajubutu is a starter on the defensive line and the offensive line. Kevin Eckleberry | Daily News

http://lagrangenews.com/wp-content/uploads/sites/37/2016/10/web1_LHS-olajubutu.jpgLaGrange’s Jonathan Olajubutu is a starter on the defensive line and the offensive line. Kevin Eckleberry | Daily News