Season’s on the line for Grangers 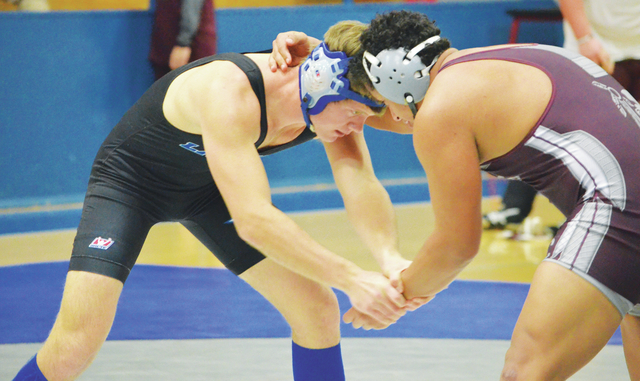 LAGRANGE – They know what’s on the line.

It has been a difficult season for the LaGrange Grangers (2-5 overall), who fell to 1-2 in Region 5-AAAA with Friday’s road loss to the Cartersville Purple Hurricanes.

LaGrange still has plenty to play for, though.

The Grangers have three regular-season games remaining, all against region opponents, so they’re very much in the mix to earn one of the region’s four spots in the state playoffs.

LaGrange’s playoff hopes would be greatly enhanced if it could find a way to get a win over the rival Troup Tigers on Friday.

If LaGrange wins, it would even its region record at 2-2 and head into the final two games with a realistic chance to make the playoffs.

The Grangers’ playoff hopes wouldn’t be over with a loss to the Tigers, but they would no longer control their own fate.

LaGrange junior offensive lineman Joe Thornton, though, said it’s important for the players to not let the magnitude of the game overwhelm them.

“I’m looking forward to getting out there,” Thornton said. “It’s a rival game, but it’s the next game. Every game is just as important. You can’t let outside stuff get to it. You just have to execute.”

While Thornton is a veteran of this game, a number of other LaGrange players will be facing Troup for the first time.

Among that group is tight end Andy Boykin, one of 11 freshmen on the varsity roster.

“I grew up watching the Troup game,” Boykin said. “Most of the time LaGrange won. Now that I’m here, I just want to try to get a win.”

Unfortunately for the Grangers, wins have been hard to come by this season, and that’s due in large part to an extremely challenging schedule.

LaGrange beat Villa Rica 28-7 in its second game of the season, and it handled Central-Carroll 30-12 in its region opener.

The five teams LaGrange has lost to, Callaway, Griffin, East Coweta, Cedartown and Cartersville, have a combined record of 28-5.

Last week’s opponent, defending state champion Cartersville, is 7-0, and it has blown out every team it has faced this season.

Although LaGrange did some nice things throughout the game, particularly on offense with quarterback LaPerion Perry passing for more than 100 yards, it was out-matched against a powerhouse team.

It’s the loss before that that really stings.

LaGrange was on its home field with a chance to move to 2-0 in the region, and it appeared as though that’s what was going to happen when it surged to a 17-0 halftime lead against Cedartown.

LaGrange’s first three possessions of the second half ended with turnovers, though, and Cedartown scored three straight touchdowns to take the lead.

The Grangers never recovered, and they lost 27-17.

On a team with a lot of players getting their first significant taste of playing under the lights on a Friday night, Burks said the challenge has been reversing the flow when things start going poorly.

“We’re a young team,” Burks said. “You’ve got to learn how to bounce back.”

Against Cartersville, LaGrange hung in there for awhile.

After falling behind 14-0, LaGrange drove 80 yards for a touchdown, with Cornell Kendrick capping that drive with a scoring run.

Quarterback LaPerion Perry, in his second game back, completed a long pass to Bo Russell on that drive.

Burks felt before the game that his players were embracing the challenge rather than shying away from it.

“We came out, and I liked how our guys looked, the way they moved around,” Burks said.

Soon enough, though, Cartersville took control and pulled away for the 52-7 win.

LaGrange had a great chance to score another touchdown in the second half, but it fumbled the ball at the Cartersville goal line.

There was some good news in the loss.

Perry, after making his season debut the previous week against Cedartown, was on the field for nearly every offensive snap against Cartersville.

He had his hands full with a ferocious defense, but he hung in there and helped lead the offense on some nice drives.

Perry, who missed the first five games while recovering from offseason hip surgery, is back at 100 percent.

Perry is flanked by some talented skill players, including fellow senior Amad Ogletree, who has spent plenty of time at quarterback over the years but has now settled in at running back.

In a victory over Central-Carroll, Ogletree ran for more than 100 yards.

Kendrick has been a force at running back and has been terrific in short-yardage situations, and Russell and Jamari Thrash present a formidable one-two combination at wide receiver.

“We’ve got some guys that can really make some plays,” Burks said. “We’re running the ball pretty well. We’ve got Bo Rusell, and Thrash. They’re doing the job. And Andy Boykin, we’ll involve him more.”

Troup has a big-play offense that has been giving opponents fits this season.

The Tigers are averaging nearly 33 points per game, and their scoring drives usually don’t last very long because of their explosiveness.

Burks said a key for his defense will be limiting those big plays.

“Eliminate the big plays,” Burks said. “Play solid D, and make them drive the ball. We just have to hold up, get them off the field.”

Burks said it will be critical for LaGrange to play a clean game, to avoid the sorts of mistakes that have been so costly in previous games.

“You can’t make mistakes,” Burks said. “No pick, no fumbles, no penalties. You can’t just give them yards. Everytime we’ve done that, we’ve had success. That’s what we’re looking for.”

The LaGrange Grangers will put their playoff hopes on the line when they take on the rival Troup Tigers on Friday night at Callaway Stadium. Kevin Eckleberry | Daily News

http://lagrangenews.com/wp-content/uploads/sites/37/2016/10/web1_LHS5.jpgThe LaGrange Grangers will put their playoff hopes on the line when they take on the rival Troup Tigers on Friday night at Callaway Stadium. Kevin Eckleberry | Daily News