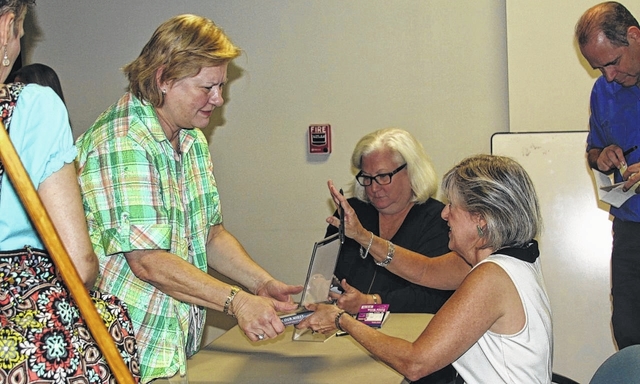 Minchew talked about her new book ‘A President in Our Midst: Franklin Delano Roosevelt in Georgia’ at the Troup-Harris Regional Library on Tuesday. The author was the executive director of the Troup County Historical Society and Archives for years, and she has spent over a decade researching her book.

“It’s debatable whether Roosevelt would have ever been president had he not gotten polio,” said Minchew. “But I think it wasn’t getting polio (that affected him). It was meeting the common man in Georgia and starting to appreciate how much other people were struggling that makes him capable of both being elected and then being our president in the 1930s and 40s, while we were facing the Great Depression. So, it is what happens because of the polio in his coming to Georgia and becoming just one of the common people.”

Roosevelt initially started coming to Georgia for polio treatments, but over the years, he grew closer to the people who lived there. He visited Georgia 41 times between 1924 and 1945 for relief from polio and from the pressures of politics. During his visits, he usually stayed at his home “The Little White House” in Warm Springs, and he often visited other polio patients, especially children.

“It is interesting how intertwined Georgia and FDR’s lives were for that 25-year period that he was visiting,” said Charlene Baxter, the co-director for the LaGrange College Library.

Minchew showed rarely seen photographs of Roosevelt like photos of him at events like the parade for the dedication of Techwood Homes, the first public housing project in the U.S., and Roosevelt with a young Jimmy Carter.

“It is really, really a breathtaking book,”said Library Manager Kathryn Adams. “The pictures alone are just amazing, and to be one of us – to have someone in our community – write something of this caliber (is great).”

Minchew is scheduled to speak on Tuesday, Oct. 25th at 11:15 a.m. in the Bailey Room of Smith Hall at LaGrange College. “A President in Our Midst” can be purchased in stores or online and is also available for checkout at the Troup-Harris Regional Library in LaGrange.

Local author Kaye Minchew talks about Franklin Delano Roosevelt’s life and his time spent in Georgia at the Troup-Harris Regional Library on Tuesday.

http://lagrangenews.com/wp-content/uploads/sites/37/2016/10/web1_LAG10132016BookTalk1.jpgLocal author Kaye Minchew talks about Franklin Delano Roosevelt’s life and his time spent in Georgia at the Troup-Harris Regional Library on Tuesday.

Mary Anne Keck offers her copy of ‘A President in Our Midst: Franklin Delano Roosevelt in Georgia’ for Minchew to sign after the lecture.

http://lagrangenews.com/wp-content/uploads/sites/37/2016/10/web1_LAG10132016BookTalk2.jpgMary Anne Keck offers her copy of ‘A President in Our Midst: Franklin Delano Roosevelt in Georgia’ for Minchew to sign after the lecture.