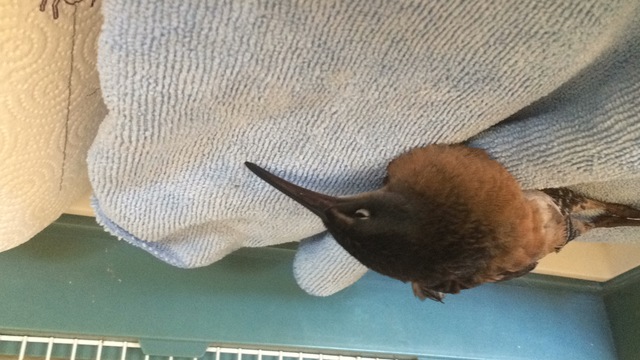 There are certain animals that you wouldn’t expect to turn up in certain parts of the world, and that applies to wading birds appearing in the Southern region of the United States.

809 Gallery of Art owner Chris Hagebak and his wife, Pepper had the opportunity to take care of this rare bird for one night.

Wading birds are said to be long-legged birds such as herons, or storks that are frequently in the shallow area of the water. They are also called waders.

“I received a call from someone in Auburn, Ala., who found the bird in the parking lot of where they were working at and she knew that we did some animal rescuing rehab work,” said Hagebak. Wildlife rescue involves rehabing animals and getting them to the right people to take care of them.

“She knew that we could at least take care of the bird until we could get it to a professional,” he said.

Hagebak and his wife drove to Auburn to pick the wading bird up when he realized that taking care of this bird would present a different challenge.

“Most work we’ve done has been with local wildlife animals like dogs, cats, and songbirds, but we’ve never dealt with a wading bird before,” said Hagebak. “We had to do some studying and had to figure out what to feed him and where to put him at. We wanted to make sure he was happy and safe with us until we got it to a professional wading bird expert in Mobile, Ala.”

Hagebak said he fed the bird crab meat and baby shrimp, enjoyed taking care if it, and was surprised that the bird didn’t resist while they held him, but instead was very calm.

“The bird was interestingly a small bird,” said Hagebok, referring to what surprised him about the bird. “The bird wasn’t much bigger than a coffee cup.”

Wading birds are scarce in this part of the United States.

“It obviously got blown this way by Hurricane Matthew because he was injured and probably had a broken hip. It didn’t get lost, it got blown away because these birds are not native to the area. There so unusual here. Now here in LaGrange we get sandpipers and gulls occasionally because we have (West Point Lake) but most coastal wading birds, you never see them around here.”

Hagebak was able to reach a marshbird expert and a rescue organization in Mobile to take the bird.

“In the end we just wanted to get the bird to the right people,” said Hagebak.

This is the wading bird the Hagebak’s cared for before taking it to a rehabilitation facility.

http://lagrangenews.com/wp-content/uploads/sites/37/2016/10/web1_IMG_1720.jpgThis is the wading bird the Hagebak’s cared for before taking it to a rehabilitation facility.