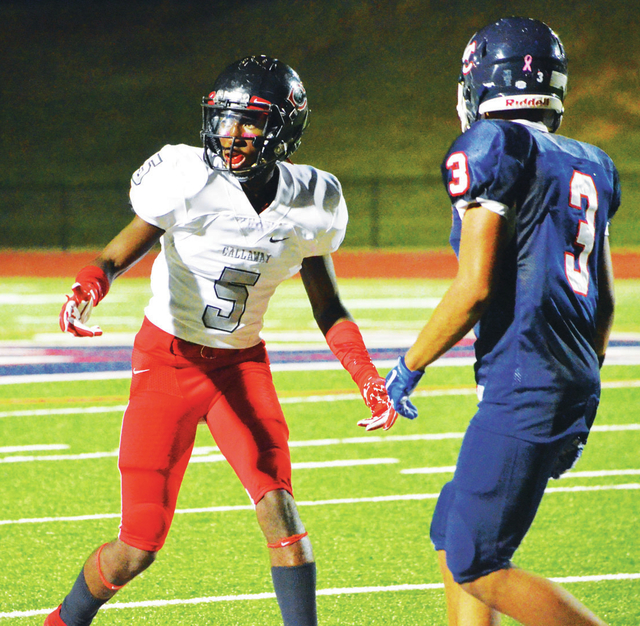 HOGANSVILLE – The coverage was there.

When Callaway quarterback Dylan Johnson threw a ball in the direction of Braylon Sanders early in the first quarter of last week’s game against Lamar County, the senior receiver had a defender with him.

Sanders went up and grabbed the ball and came down with it, and he trotted into the end zone for the touchdown, and that was the start of an explosive first half for the Cavaliers, who scored on six consecutive possessions to take a 38-0 lead at the break.

For Callaway’s opponents, giving up big plays has been an all too common refrain.

With weapons all over the field, and a veteran offensive coordinator in Matt Napier who always seems to dial up the right play, Callaway has been hard to stop this season.

The Cavaliers are averaging nearly 38 points per game, an especially impressive total considering they’ve done most of their scoring in the first halves of their games.

Last week’s game was a prime example of that.

Callaway was up 38-0 at the half, and with the starters on the sideline, it didn’t score in the second half on the way to a 38-7 victory.

There is no set-in-stone formula for Callaway’s offensive success.

Callaway has delivered numerous explosive plays in the running game with junior DJ Atkins tearing through opposing defenses, and the passing game has been phenomenal with Johnson an Sanders hooking up for numerous touchdowns.

Throw in an offensive line that makes sure Johnson has time to throw, and that Atkins has ample room to run, and it’s no surprise that Callaway has been seemingly scoring at will for much of the season.

“We’re blessed with playmakers all over the field,” Napier said. “And up front, we’ve done a great job so far, playing physical, and giving Dylan time on the play-action pass, and then letting DJ get to the secondary, and letting him do what he can do. They’ve done a great job allowing that to happen. And taking care of the football is a huge deal. We’ve done a good job of not turning the ball over.”

Johnson is a big reason why Callaway’s offense has been so prolific.

Johnson, who played quarterback at different points during his sophomore and junior years, was penciled in as the starter before this season.

Johnson has been terrific, throwing for nearly 700 yards with 10 touchdowns, and he is also a threat running the ball, as he showed against Lamar County with a 30-yard scoring run.

“I feel very comfortable,” Johnson said. “I’m getting the reps every week. And I believe in our O-line.”

Johnson enjoys the chance to run the ball, and he has been effective whether it’s been a designed run or a scramble.

“I used to be a running back in the day,” Johnson said. “So it’s fun to bring that stuff back out of me. I liked running it.”

Napier said Johnson’s ability to run has helped the offense gain positive yards on plays that appeared to be in trouble.

“Dylan’s done a great job of play-action passing, but of also being able to scramble, and convert some third downs,” Napier said. “Many times he’s been able to scramble out of the pocket and make some plays.”

Sanders was the quarterback in 2015 before he was injured, and Napier felt the offense would be better-served with him playing wide receiver this season.

“We knew how special Braylon was at receiver,” Napier said. “Just from a team standpoint, we felt that was the best thing.”

That decision has paid big dividends since Sanders has seven touchdown catches in six games, including a 75-yard catch in the season opener against LaGrange.

Many of Sanders’ scoring catches have come with defenders right on him, but he has made the plays anyway.

Johnson never has any hesitation about throwing the ball in Sanders’ direction, no matter the coverage.

Sanders, who is also a standout basketball player, said “I just go and get the ball. The ball’s in the air, I’m going to go get it, no matter what.”

Sanders is the latest in a long line of big-play receivers the Cavaliers have had, a list that includes Quantavius Leslie and Terry Godwin.

“He’s a special player,” Napier said. “We’ve been fortunate enough to have a lot of those guys, with (Godwin), and Q Leslie. He’s right there in that mold.”

While Sanders is clearly Johnson’s favorite target in the passing game, he’s hardly the only one.

DQ Wilkerson had a 52-yard touchdown on a screen pass in the LaGrange game, and Johnson has also thrown scoring passes to Michael Freeman and Khaliq Swift.

Callaway’s other two touchdown passes were thrown by Sanders.

Sanders threw a scoring pass to Johnson in the Handley game, and he tossed a 45-yard touchdown pass to Courtney Williams to close the first half against Harris County.

“Braylon’s a dynamic player, and we like to throw him in there (at quarterback) and make plays every once in awhile,” Napier said. “He’s 3-for-3 with two touchdowns on the year.”

Napier appreciates having a one-two combination like Johnson and Sanders.

“Both of them are just play-makers,” Napier said. “It’s really figuring out what best suits the team. There’s no real wrong when you’ve got guys like that.”

Atkins has provided a spark in the running game.

He’s closing in on 1,000 yards while averaging about 10 yards per carry, and he has scored 10 touchdowns.

In a memorable performance against Columbus, Atkins had scoring runs of 62 and 51 yards, and against Upson-Lee, he had more than 150 yards in the first quarter alone.

Sophomore Tely Fanning, who has overcome two ACL injuries, has done a solid job running the ball as well, and he had a touchdown run against Harris County.

Cartavious Bigsby had a 53-yard scoring run in the Handley game, and fullback Jibrell Jackson has three scoring runs.

Paving the way is an offensive line that has been superb.

Jackson has provided exceptional blocking from the fullback position, and Freeman and Lichon Terrell have gotten it done at tight end.

With Carter unable to go against Lamar County, Thomas Hodge stepped in and the offensive line didn’t miss a beat.

“It goes back to the physicality up front,” Napier said. “You figure out where you’re going to have a good football team depending on how you block. They’ve done a good job. And Jibrell Jackson has done a phenomenal job.”

The offensive line lost some key pieces from the 2015 team so there were some question marks before the season, but that unit has been a strength of the team.

Wiggins said another key to the offense’s success is the downfield blocking provided by the wide receivers.

“Our wide receivers take a lot of pride in their physicality,” Wiggins said. “Coach (Kareem) Douhne does a great job with them. He played that position in high school and college. They do a great job.”

It’s all come together for Callaway’s offense, although Sanders said it’s important to not be satisfied.

“Everything’s clicking I feel like,” Sanders said. “We’ve just got to get in practice, and keep working on the little things to get better.”

Callaway quarterback Dylan Johnson pulls a host of Lamar County defenders with him during the first half of last week’s game. Johnson threw two touchdown passes and had a scoring run. Kevin Eckleberry | Daily News

http://lagrangenews.com/wp-content/uploads/sites/37/2016/10/web1_CHS-johnson.jpgCallaway quarterback Dylan Johnson pulls a host of Lamar County defenders with him during the first half of last week’s game. Johnson threw two touchdown passes and had a scoring run. Kevin Eckleberry | Daily News