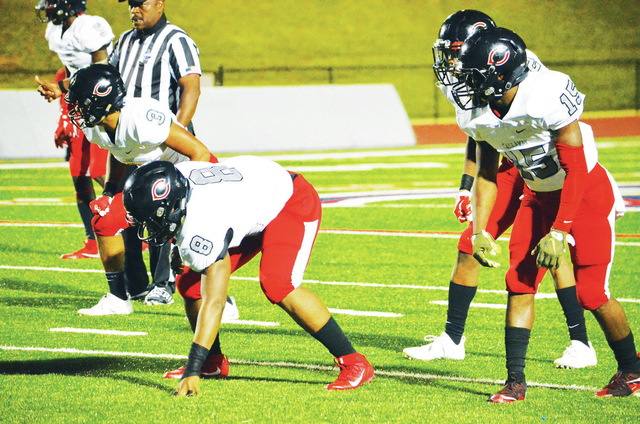 HOGANSVILLE – It’s not a region-championship game.

Whatever happens tonight at Callaway Stadium, there will still plenty of work left to do for either Callaway or Heard County in the quest for a region title.

There is no questioning the magnitude and the importance of this game, though.

First of all, it’s a big-time rivalry, and once again the teams will playing for the Pulpwood Classic trophy.

More importantly, though, it is a matchup of the top two teams in Region 5-AA, and whoever comes out on top tonight will be the heavy favorite to win the region championship.

Both teams are having big seasons.

Callaway is 6-0 overall, and it thumped Lamar County 38-7 last week in its region opener.

Heard County is 5-1 with its lone loss coming to Darlington, and it overwhelmed Temple 41-0 in its first region game.

The success of the two teams hasn’t gone unnoticed, with both of them ranked among the state’s top teams.

In the Class AA Associated Press poll that was released this week, Callaway was ranked fourth, and Heard County was sixth.

So there will be plenty on the line when the Cavaliers and Braves make their way onto the turf of Callaway Stadium for tonight’s showdown, with kickoff set for 7 p.m.

“This is a big rivalry,” Callaway head coach Pete Wiggins said. “This is a game that has been a tough football game for a long time. Both communities know each other. It’ll be an exciting football game.”

Callaway has had the upper-hand in the rivalry in recent years.

Heard County won a 43-37 shootout to open the 2012 season, but Callaway has won the past three years, including last year’s 20-17 win in Franklin.

Making it four in a row over Heard County will be a major challenge for Callaway.

Heard County opened the season with three straight wins, and following a road loss to Darlington, it won two in a row to improve to 5-1.

Against a Temple team that has only lost once this season, Heard County delivered a phenomenal performance and won 41-0.

Heard County is led by junior quarterback Emory Jones, who has committed to Ohio State.

“Heard County’s got a great football team,” Wiggins said. “Emory Jones does a great job. He’s a very dynamic player. He throws the ball well, and he runs well. He’s got a lot of game experience. He’s a leader on the football team.”

“He anchors their defensive line, and last year he played linebacker,” Wiggins said. “He can do a lot of things. He’s a physical kid that runs to the ball.”

“He’s a versatile player,” Wiggins said. “He’s got good hands at tight end, and he’s a good player on defense and does a great job blocking. They’ve got a lot of good players. Coach (Tim) Barron and his staff do a great job.”

For Callaway, it has all come together this season.

The Cavaliers have been unstoppable on offense, scoring nearly 40 points per game, and they’ve been stingy on defense as well, allowing just 76 points in six games.

The special-teams play has been terrific as well, with Noah Stephens doing an outstanding job in the kicking game, while Dylan Johnson is an exceptional punter.

“I’m really proud of their focus,” Wiggins said. “We’re always talking about playing one game at a time. I felt like we’ve done that. I feel like we’ve played a tough schedule getting to this point.”

As for tonight’s game, Wiggins said “it’s going to be a hard-fought, physical football game, and we just have to go out and have minimal mistakes, and try to play our style of ball.”

OF NOTE: For updates from tonight’s game, check out @lagrangesports on Twitter.