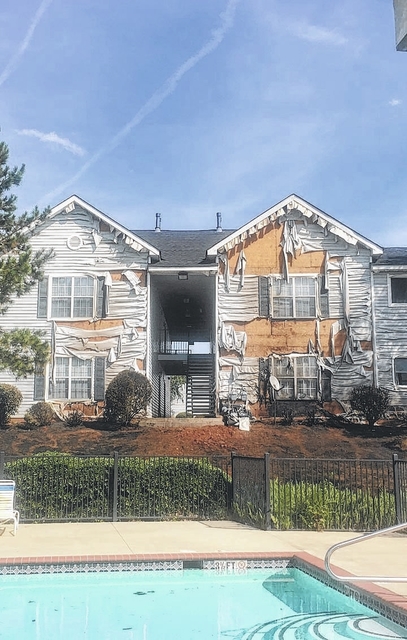 LaGRANGE — A grass fire turned dangerous as flames fanned over several natural gas heaters next to a building in the Lee’s Crossing Apartments at 119 Old Airport Road about 4:30 p.m. on Thursday.

Witnesses called 911 and told dispatchers some bushes and grass behind an apartment building were on fire, stated Lt. Rob Vael with the LaGrange Fire Department.

Four minutes later, as the first engines arrived on scene, the blaze had moved up a small embankment and spread to some natural gas meters located next to the building, Vael said.

While the the fire is still under investigation, firefighters believe the flames may have heated a metal pipeline that connects the meters into the ground, Vael explained. The heat potentially loosened the pipeline and caused natural gas to spill out and move upwards into the air where it caught fire, he stated.

The flames continued to grow and moved up the side of one building before jumping across the breezeway to a second building, Vael said.

More fire crews were brought in and quickly contained the fire, according to Vael. LaGrange firefighters continued to spray down the building and gas meters until utility workers could arrive on scene and shut off the gas, he stated.

The siding on both buildings melted from the intense flames. A few apartments also sustained minimal damage as the heat on their windows melted the blinds on the inside of the home, Vael stated.

Firefighters evacuated all nearby buildings during the incident. No one was hurt.

Siding is melted off a building at Lee’s Crossing apartments after a ground cover fire got out of control Thursday.

http://lagrangenews.com/wp-content/uploads/sites/37/2016/10/web1_LAG1015LeesCrossingFire.jpgSiding is melted off a building at Lee’s Crossing apartments after a ground cover fire got out of control Thursday.