Grangers’ Perry is happy to be back 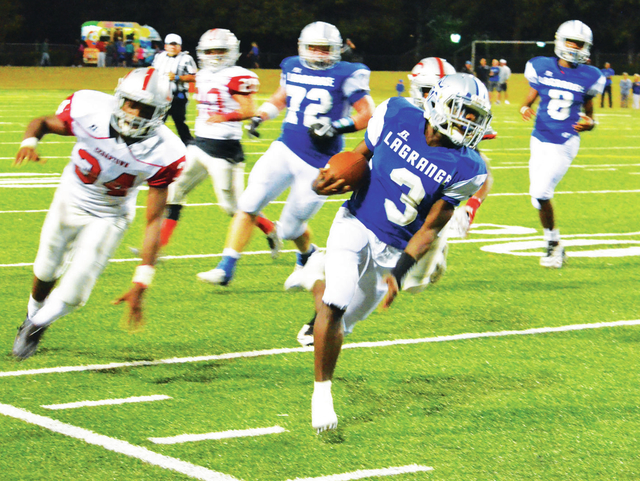 LAGRANGE – Others may have doubted him, but as far as LaGrange High’s LaPerion Perry was concerned, there was never any question he’d be back on a football field this season.

During the 2015 season, Perry was a dynamic, two-way threat at quarterback, and he was obviously going to be the centerpiece of the offense this season.

Unfortunately for Perry, at some point (and he’s not sure when) he suffered a hip injury, and that eventually required surgery.

For Perry, the question wasn’t if he’d come back, but when.

Sure enough, when the sixth game of the season rolled around, Perry was back, playing the sport that brings him such joy.

Tonight, Perry will play the arch-rival Troup Tigers for the final time, with kickoff set for 7:30 p.m. at Callaway Stadium.

“It means a lot to me,” Perry said of the opportunity to return to the field. “I got to go back out there with my teammates. People thought I wasn’t going to come back, they thought I was going to miss more games than I did. But I came back.”

Perry’s 2015 season ended with a foot injury that kept him from playing in a mini-playoff game against Columbus, which LaGrange lost.

After recovering from that injury, Perry joined the basketball team, and he helped the Grangers win a region championship and advance to the second round of the state tournament.

Perry then turned his focus back to football as he prepared for what he hoped would be a memorable senior season.

Perry’s plans had to be altered when he noticed some discomfort in his hip, and that eventually led to surgery.

While Perry was dealing with that, tragedy struck in his personal life when his father, Nick Perry, was killed in a car accident not too long before the season began.

That was a brutal blow for Perry, but he kept pushing and tried to maintain the positive demeanor that is such a big part of his personality.

Through everything that has happened, Perry said “I feel like I’m a better person.”

In Perry’s return, he led the offense to two first-half touchdowns as LaGrange surged to a 17-0 halftime lead against Cedartown.

Perry sat out most of the second half, and Cedartown rallied for a 28-17 victory.

Last week against top-ranked Cartersville, Perry threw for more than 100 yards and helped LaGrange stay in the game early, but it was the Purple Hurricanes pulling away for a 55-7 win.

While Perry may not have been ready to go the distance against Cedartown, he said he had no issues in the Cartersville game.

“I felt like my wind was better,” Perry said. “Before the game, I just felt like I could play the whole game. I had a lot of confidence.”

LaGrange (2-5 overall) is 1-2 in Region 5-AAAA, so it is in a near must-win situation against Troup.

It helps to have a player like Perry in your corner.

In a win over Shaw, Perry had four touchdown passes, including a 57-yard scoring pass to Kimani Barnes with less than a minute left that provided the go-ahead points in a 35-28 win.

That was the sort of year Perry had, and he was recognized as an all-state player when the season ended.

Against Cedartown, Perry showed off his explosiveness right away with a long run on the first offensive play, and he capped that drive with a scoring run.

LaGrange head coach Dialleo Burks said by the time Perry was given clearance to be a full participant practice, he was ready to go.

“It didn’t take much for him to get back into shape,” Burks said. “He was right on schedule. We’re glad to have him. He’s been a spark for us.”

LaGrange needs a strong finish to earn one of the region’s four playoff spots.

“We want to go out and win these last three,” Perry said.

As for today’s game, Perry said there will be no limitations physically on what he can do.