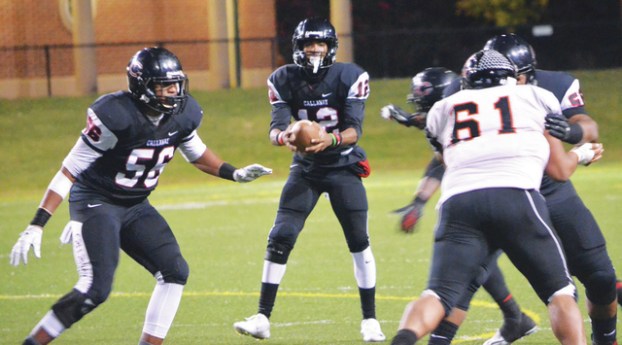 After driving 87 yards for a touchdown to take the early lead against the Callaway Cavaliers on Thursday night at Callaway Stadium, they recovered an onside kick and were threatening to score again.

Callaway’s defense was up to the challenge, though.

The Cavaliers didn’t give up any yards on three plays to force a punt, and the home team soon seized momentum in the Region 5-AA showdown.

Callaway, thanks in no small part to another strong performance by the defense, took care of Heard County 24-14 to improve to 7-0 overall, and 2-0 in the region.

After giving up the early touchdown, the Cavaliers scored 24 unanswered points, and the outcome had been decided by the time the Braves scored with less than a minute left.

It was a critical win for the Cavaliers, who took a massive step forward in their quest to win a second straight region championship.

“This was one of our biggest games of the year,” said junior defensive lineman Lichon Terrell. “They’re one of the toughest teams in our region, and we beat them. It was big.”

There is still work to do.

Callaway has three regular-season games remaining, all against region foes, beginning with Friday’s game at Temple.

Callaway closes the regular season with home games against Spencer and Jordan.

“The most important thing is the next game,” Callaway defensive lineman Keegan Woods said. “Temple, we’ve got to focus on them first before we worry about anything else.”

Callaway, which is 7-0 for the first time in school history, had a complete performance against a strong Heard County team.

Heard County’s defense did a respectable job, but Callaway still moved the ball well throughout the game.

The Cavaliers did it mostly on the ground, with DJ Atkins continuing his stellar junior season.

Atkins didn’t have the break-away runs he usually has, but he continued to gain positive yardage play after play against a rugged Heard County defense.

“I can keep punching, get first down after first down,” Atkins said. “Besides the Handley game, this was the one where I kept getting tripped by my ankles and stuff. I had to keep pushing, just keep getting first downs. I really enjoyed it.”

Atkins had one of Callaway’s three touchdown runs, and quarterback Dylan Johnson and tight end Michael Freeman had the others.

Atkins started the scoring for Callaway with a 9-yard scoring run in the first quarter, and Johnson had a 13-yard touchdown run later in the half.

In the third quarter, Freeman got a rare carry and scored on a 12-yard run.

Callaway did have a handful of big plays in the passing game.

The Cavaliers’ longest pass came on a trick play that was dialed up by offensive coordinator Matt Napier.

On the Cavaliers’ first possession, Johnson handed the ball off to Atkins, who pitched the ball to wide receiver Braylon Sanders.

The Cavaliers were stymied from there, and they ended up having to punt.

On the Cavaliers’ third possession, they faced a fourth-down situation when Johnson connected with Sanders on the sideline for a 15-yard completion.

Atkins capped that drive with his touchdown run, and Noah Stephens made the extra point to tie the game.

On a touchdown drive in the third quarter, Johnson completed an 8-yard pass to Wilkerson.

Mostly, though, the Cavaliers did it with the ground game, and head coach Pete Wiggins said that was the plan.

“We talk about being physical, and winning the line of scrimmage,” Wiggins said. “At halftime, we said we were going to keep pounding, and keep getting the three and four-yard gains. Let’s keep running the ball. I was proud of the kids’ physicality.”

That success on the ground was possible because of a strong effort by Callaway’s offensive line, which has been a strength of the team.

Freeman and Jackson, the tight ends, are also key components of the blocking attack.

“I appreciate (the offensive linemen) a lot, ” Atkins said. “They grind. They come out here and block 100 percent for me. I feel happy when they do their job. They pat me on the back. We motivate each other. We do that all game.”

For Callaway’s defense, linebackers Jonathan Leonard and Qua Hines led the team with nine tackles apiece, and Freeman had seven tackles from his linebacker position.

Defensive lineman Jamie Sellers had seven solo tackles, and he recovered a fumble in the third quarter that led to a touchdown.

Terrell had six tackles, including two tackles for loss, and defensive lineman Thomas Hodge forced the fumble that Sellers recovered.

Junior Dominique Copeland headlined a Callaway secondary that was strong as usual.

Terrell said the defense is getting better every game.

“As each game keeps going, we’re communicating better, and we’re getting closer and closer,” Terrell said.

In the kicking game, Noah Stephens was solid as always, making each of his three extra-point attempts, and he made a 42-yard field goal in the second half.

Callaway’s Braylon Sanders gets ready to throw a pass to DQ Wilkerson during the first half of Thursday’s game. Kevin Eckleberry | Daily News

http://lagrangenews.com/wp-content/uploads/sites/37/2016/10/web1_CHS9-1.jpgCallaway’s Braylon Sanders gets ready to throw a pass to DQ Wilkerson during the first half of Thursday’s game. Kevin Eckleberry | Daily News

They’re not done yet. The Troup Lady Tigers went on the road and beat Burke County in three straight sets... read more