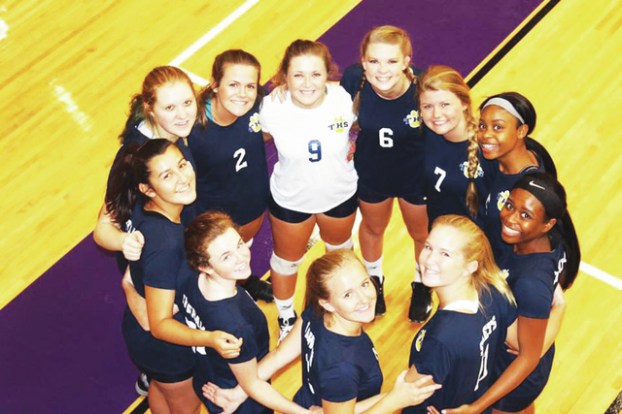 LAGRANGE – It was their night.

The Troup Lady Tigers went on the road hoping to win the first state-tournament game in the history of the school’s volleyball program, and they made it happen in emphatic fashion.

Ridgeland, which beat Carver in its first-round game on Thursday, will host Troup in a second-round matchup next week.

It was a big moment for Troup, which has thrived under the direction of head coach Jodi Dowden.

Troup had reached the state tournament three times previously under Dowden, but it fell in the first round on each of those occasions.

Troup crossed getting a state win off its do-list in emphatic fashion on Thursday.

Dowden said it was the culmination of a “great day.”

“We started out with a breakfast. Rosemont Baptist Church came and provided that for us, and gave us some motivation,” Dowden said. “We got a sendoff from the school a little after 9. The whole student body came out and cheered for us. We had a great lunch together at Olive Garden in Augusta, and then walked in there and took care of our business. Now we’ve got to get back to business on Monday.”

Dowden said the goal now is to not be satisfied with just making it this far.

“The thing I keep telling this team is, every day we try to get a little bit better,” Dowden said. “We haven’t hit our top yet. We’re just going to keep working to get better, and get in the gym and get after it.”

In Thursday’s match, Dowden said the team went in with no knowledge of the opponent.

“We don’t know what we’re coming up against, since there wasn’t a whole lot of scouting information,” Dowden said. “We’d never played them. We didn’t know anybody that had played them. We had no idea what to expet when we walked in the gym. We can’t control what they’re doing, but we can control what we do.”

Dowden said the team was at its best late in the match.

“In the third game, we took care of business, and took care of our errors, and really got on a roll with our serving, and just took care of the ball better, like we should have in Game 2,” Dowden said.

For Dowden, the moment was particulary meaningful.

Dowden was there for the inception of the program when she was playing volleyball at LaGrange College.

“Troup started in 1997, because I helped get it started when I was at the college,” Dowden said. “They made a couple of phone calls, and called over the college and asked if anybody would help the high school get it started. I went over and helped the first couple of coaches. I was a player at LaGrange College. I went over and helped, and that’s how they got started.”

Dowden later returned as the head coach, a position she has held for nearly 10 years.

Now, she’s the coach of a team heading to the sweet 16 of the state tournament.

“It’s a huge accomplishment,” she said.

Troup’s volleyball team got a road win over Burke County in the opening round of the state volleyball tournament. Contributed photo

http://lagrangenews.com/wp-content/uploads/sites/37/2016/10/web1_volleyball.jpgTroup’s volleyball team got a road win over Burke County in the opening round of the state volleyball tournament. Contributed photo

They’re not done yet. The Troup Lady Tigers went on the road and beat Burke County in three straight sets... read more