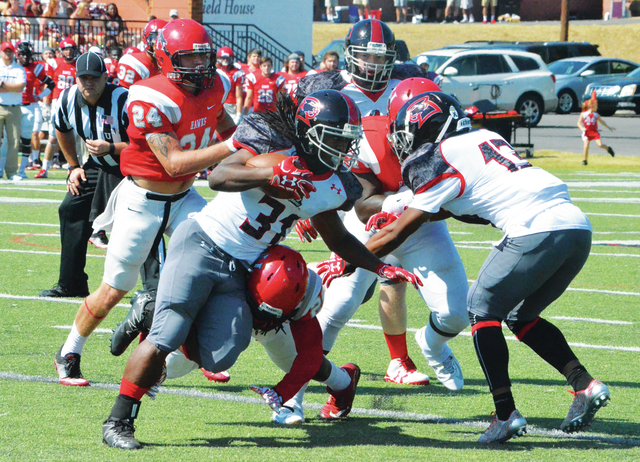 MONTGOMERY, Ala. – The LaGrange College Panthers and Huntingdon Hawks came into Saturday’s USA South showdown averaging nearly 100 points between them, so it had all the makings of a shootout.

The Hawks held up their end of the bargain, with senior quarterback Luke Bailey headlining an explosive offense that compiled more than 500 yards and scored 55 points.

The Panthers were unable to keep up the pace, though, and they only found the end zone twice in the 55-13 loss.

The Panthers hung in there early.

The game was tied 7-7 in the first quarter after LaGrange College went on a 75-yard scoring drive, but Huntingdon came right back with a touchdown, and the rout was on.

Huntingdon surged to a 27-7 lead at the half, and it continued to pull away in the second half.

LaGrange College quarterback Connor Blair had solid numbers, completing 25-of-37 passes for 286 yards with one touchdown and an interception.

Lavelle Meeks was on the receiving end of six of Blair’s completions, and he had a touchdown.

Alex Scott, LaGrange College’s backup quarterback, had a 2-yard touchdown run in the second half.

For the Hawks, it was all about balance.

The Hawks threw for 279 yards, with Bailey accounting for most of that total, and they also ran for 285 yards and averaged 5.5 yards per carry.

Five different Huntingdon players had at least one rushing touchdown, and Bailey tossed a pair of scoring passes.

Huntingdon’s defense, meanwhile, was able to get steady pressure on Blair which was the key to its success.

The Panthers, who hadn’t scored fewer than 37 points in a game this season, were held more than 30 points below their season average on Saturday.

“I’m really proud of our defense,” Huntingdon head coach Mike Turk said. “We got after their quarterback and had relentless pressure in the first half. That pressure was really the difference in us getting momentum and pulling away from them.”

The Panthers did put together an impressive seven-play touchdown drive in the first quarter.

Huntingdon jumped on top when Vic Jerald scored on a 1-yard touchdown run with 5:23 left in the opening quarter.

The Panthers barely needed two minutes to pull even, with Blair capping the touchdown drive with a 19-yard scoring pass to Meeks, and Zachary Kudwa made the extra point.

The rest of the half belonged to the Hawks, who scored four unanswered touchdowns to take a 34-7 lead at the break.

Bailey threw scoring passes of 32 yards to Nick Haas and 13 yards to Zach Camp, and Jerald and John Iwaniec each had short scoring runs.

The halftime break did nothing to slow the Hawks’ momentum.

Iwaniec and Jay Ware each had touchdown runs as the Hawks built a 41-7 lead before the Panthers were able to find the end zone again.

After Blair completed a handful of passes to get the Panthers to the 1-yard line, Scott entered the game and had the touchdown run.

The two-point attempt failed, and Huntingdon’s lead was 41-13.

There would be no comeback, though.

Bailey and Dontavion Cunningham each had fourth-quarter touchdown runs as the Hawks won going away.

LaGrange College will look to get back on track when it hosts Ferrum on Saturday at 1 p.m.

It will be LaGrange College’s homecoming.

LaGrange College’s Josh Hardrick goes up to make a catch during the first half. Kevin Eckleberry | Daily News

http://lagrangenews.com/wp-content/uploads/sites/37/2016/10/web1_LC14.jpgLaGrange College’s Josh Hardrick goes up to make a catch during the first half. Kevin Eckleberry | Daily News