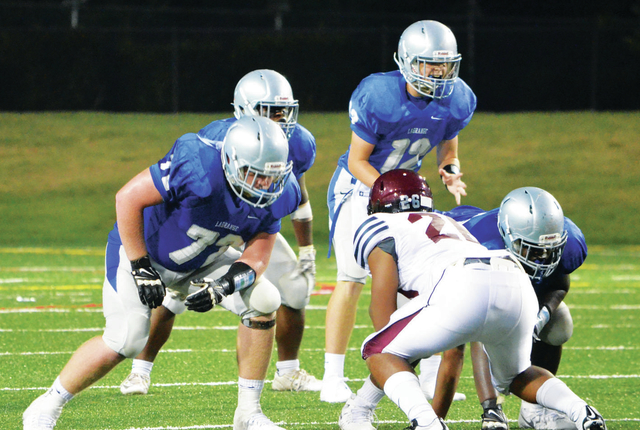 LAGRANGE – He gave it his all.

In his final game against the rival Troup Tigers, LaGrange’s LaPerion Perry delivered a remarkable performance, accounting for four touchdowns from the quarterback position while also playing the entire game on defense as a safety.

LaGrange staged a late rally to make things interesting, but it was Troup hanging on for a 37-26 victory at Callaway Stadium Friday night.

The Grangers’ playoff hopes took a big hit with the loss.

LaGrange (2-6 overall) fell to 1-3 in Region 5-AAAA, and it has to close the regular season with wins over Sandy Creek and Chapel Hill to have any chance of securing one of the region’s four playoff spots.

It was a disappointing night for the Grangers, but head coach Dialleo Burks had no complaints with the effort of Perry, or anyone else on the team.

“We got everything we could out of him, and a lot of our guys,” Burks said. “They left it on the field tonight. I was proud of them. You don’t like the outcome, but you want to see your guys fight.”

Perry, who missed the first five games of the season while recovering from offseason hip surgery, showed plenty of fight.

Perry was wearing the number 28 jersey in honor of his father, Nick Perry, who died earlier this year in a car accident.

Perry delivered an inspired effort, and it was reminiscent of so many of his performances from a year ago when he was an all-state player.

Perry threw a pair of touchdown passes to sophomore wide receiver Jamari Thrash, and he also had two scoring runs, including one that covered 50 yards in the fourth quarter that cut Troup’s lead to 11.

Perry ran for more than 200 yards, and many of those yards came on broken plays where it looked like he was going to be tackled in the backfield, but he managed to get out of trouble and make his way downfield.

Perry also threw for more than 150 yards with the two touchdowns.

On Perry’s final play, he heaved a desperation pass downfield on fourth down, and Jalen Wilson came up with the circus catch.

Perry was hit late on the play and he had to leave the game, so he wasn’t around when Troup’s King Mwikuta intercepted a pass in the end zone to clinch the victory.

It was a loss, but Perry put on a clinic and played his guts out, and Burks expected nothing less from the senior.

“That’s how big his heart is,” Burks said. “He has a very big heart. That’s why I know guys like that are going to be very successful in life. And we’ve got a lot of them. I wouldn’t give anything up for them, for any of those guys. We’re going to be OK.”

LaGrange found itself in a 37-14 hole after Troup scored a touchdown with 3:59 left in the third quarter.

It looked like the Tigers were poised to perhaps win going away, but the Grangers kept coming.

On the ensuing possession, the Grangers needed a little more than two minutes to find the end zone and cut into the Tigers’ lead.

The big play on the drive was a a 49-yard completion from Perry to senior running back Amad Ogletree that put the ball on the 11-yard line.

Two plays later, Perry connected with Thrash for the 8-yard touchdown pass, and after a failed two-point attempt, Troup’s lead was 37-20.

LaGrange’s defense then made a stop, and the offense took over near midfield.

On second down, Perry split the Troup defense and took off for a 50-yard touchdown run, and following a blocked extra-point try, it was an 11-point game with 11:09 to play.

LaGrange, with momentum firmly on its side, then came through with another big play when Rico Dunn recovered a fumble deep in Troup territory.

The Grangers couldn’t get anything done, though, and the Tigers took over after Perry was tackled for a loss by Nick Ligon on fourth down.

Troup drove into LaGrange territory, but it was stopped on fourth down at the 37-yard line with 4:23 to play.

The Grangers took over, and they were at midfield facing fourth-and-long, and it was last-gasp time.

Perry, knowing he was about to get hit, hung in the pocket and delivered the pass, and Wilson somehow made a catch inside the 10-yard line, despite having a pair of defenders all over him.

Moments before, Perry had completed a 21-yard pass to DeAnthony Rachel to move the chains.

The late-hit penalty combined with the catch put the ball on the 4-yard line, and sophomore quarterback Jakoby Smith ran the ball to the 1-yard line.

On the next play, Smith put the ball in the air, and an alert Mwikuta came up with the pick to wrap things up.

LaGrange scored its first two touchdowns in a back-and-forth first half.

With the Grangers trailing 7-0 early in the second quarter, Thrash picked off a pass in the end zone.

Perry worked his magic on the ensuing possession with runs of 12 yards and 36 yards to get the ball deep in Troup territory, and he finished things off with a 17-yard touchdown run.

Austin Stamper’s extra point pulled LaGrange even with 7:05 left in the opening half.

Troup got a 69-yard touchdown pass from Montez Crowe to Kobe Hudson moments later, but LaGrange came right back with a score of its own.

On first down, Perry took off on a 55-yard run, and he added a 13-yard run two plays later, putting the ball on the Troup 12.

On the next play, Perry hooked up with Thrash for the 12-yard touchdown, and Stamper’s extra point tied it at 14-14 with 4:40 left in the half.

The two teams then exchanged punts, and Troup got the better end of that bargain.

Troup’s punt pinned LaGrange on its own 9-yard line, and it was unable to move the ball.

The Tigers then took over at the Grangers’ 44-yard line following a short punt, and they scored a touchdown to take a 20-14 lead.

With 30 seconds left in the half, the Grangers weren’t content to sit on the ball, and Perry threw an interception, and that led to a field goal that allowed the Tigers to take a 23-14 lead at the break.

Troup got a defensive touchdown moments into the second half on an interception return by Joko Willis to pad the lead, and it scored an offensive touchdown on its ensuing possession to go up 37-14.

The Grangers had given up 23 consecutive points and all the momentum was against them, but they recovered and got back into the game, but they fell just a bit short.

“We’ve got two games left,” Burks said. “We’re here at home. We’ve just got to come with that same passion and energy.”

LaGrange’s LaPerion Perry rolls out during the first half of Friday’s game against Troup. Perry had nearly 400 combined yards running and passing, and he had two touchdown passes and two scoring runs. Kevin Eckleberry | Daily News

http://lagrangenews.com/wp-content/uploads/sites/37/2016/10/web1_LHS22.jpgLaGrange’s LaPerion Perry rolls out during the first half of Friday’s game against Troup. Perry had nearly 400 combined yards running and passing, and he had two touchdown passes and two scoring runs. Kevin Eckleberry | Daily News

LaGrange’s Bo Russell runs after making a catch in the first half. Kevin Eckleberry | Daily News

http://lagrangenews.com/wp-content/uploads/sites/37/2016/10/web1_LHS-russell.jpgLaGrange’s Bo Russell runs after making a catch in the first half. Kevin Eckleberry | Daily News

LaGrange’s defense gets in position before a snap during Friday’s game. Kevin Eckleberry | Daily News

http://lagrangenews.com/wp-content/uploads/sites/37/2016/10/web1_LHS28.jpgLaGrange’s defense gets in position before a snap during Friday’s game. Kevin Eckleberry | Daily News