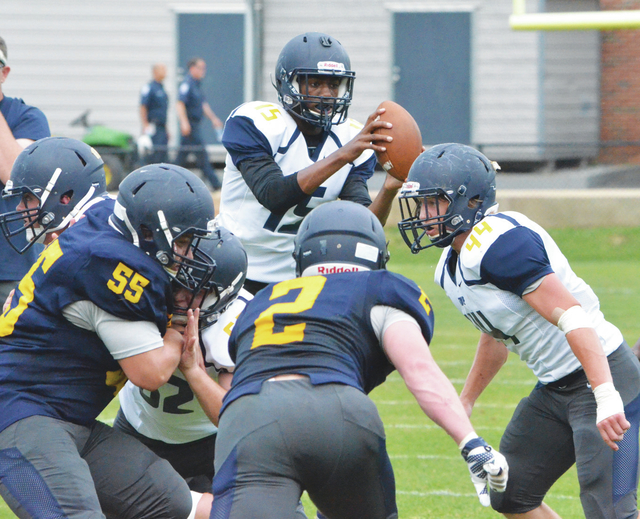 LAGRANGE – The game was still in the balance.

The Troup Tigers had an 11-point lead with less than two minutes left, but the LaGrange Grangers were on the 1-yard line, so the victory wasn’t yet in the bag.

Troup needed someone to step up and make a play, and sophomore defensive lineman King Mwikuta was up to the challenge.

LaGrange sophomore Jakoby Smith, who was in the game in place of injured quarterback LaPerion Perry, was pressured, and his pass was picked off by Mwikuta in the end zone.

Troup was able to run a couple of kneel-down plays, and that was that.

It got a bit more interesting for the Tigers than they would have liked after they’d taken a 23-point lead in the third quarter, but they walked away with the 37-26 win.

Troup (6-1) won its sixth straight game and improved to 3-0 in Region 5-AAAA and remained tied for first place.

Troup faces a huge home showdown against Cedartown on Thursday, and it closes the regular season against Central-Carroll and Cartersville.

“I thought we showed a lot of poise when we needed to,” Troup head coach Tanner Glisson said. “I thought early in the game, we were so wound up. We’ve got to do a better job of focusing on the little things. But down the stretch when things got tight, I thought we brought our emotions back together.”

Mwikuta’s game-clinching pick was a fine example of that.

It had the makings of a running play with the Grangers just one yard from the end zone, but Mwikuta was ready for the pass.

“Something told me, go ahead and move wide,” Mwikuta said. “Me and Nick Ligon bumped out.”

LaGrange did an excellent job of climbing back into the game, but Troup did what it needed to do to get the win.

“I’m not going to lie. We were getting real complacent going deep into the fourth quarter,” Mwikuta said. “But I believed in my team.”

Earlier in the half, fellow defensive lineman Joko Willis had an interception return for a touchdown, and linebacker Kevin Martin had a pick in the first half as well as a key sack in the second half.

After LaPerion Perry ripped off a 50-yard touchdown run with 11:09 left in the game to get LaGrange within 11, Troup’s defense made three straight stops to end the game.

“We just had to keep playing,” Martin said. “We missed a pile of tackles, but we won the game.”

Things started to get really tense when Rico Dunn recovered a fumble, giving LaGrange the ball at the Troup 30-yard line trailing by 11 points with more than 10 minutes still to play.

On fourth down, Nick Ligon got into the backfield and brought Perry down for the sack, giving Troup the ball.

The Tigers got a pair of first downs and made it to the Grangers’ 40-yard line before a fourth-down play came up short.

Perry completed a hail-mary pass to Jalen Wilson inside the Troup 10-yard line, but that last-gasp scoring chance was snuffed out by Mwikuta.

It wasn’t easy, but the day belonged to Troup.

“Usually, people don’t ask how you win, they ask did you win,” Russell said. “But we’ve got a lot of things to work on, and we saw that from this game.”

A strength of Troup’s team this season has been its passing attack, and that was the case on Friday.

Crowe continued to enjoy a stellar junior season with the three scoring passes, and he also had an effective night running the ball.

Crowe threw an interception in the end zone in the second quarter when Troup had a chance to go up 14-0, but he bounced back from that miscue and was sharp the rest of the way.

Russell, despite suffering a knee injury during the game, ran strong and had an 8-yard scoring run in the first quarter.

Twice Russell left the game, but both times he came back in and provided a strong presence in the running game.

“I had to find a way,” Russell said. “I had to push through for my teammates.”

Troup’s special-teams play was as exceptional as always.

During one key stretch late in the first half, Carson Wreyford had a punt that pinned LaGrange inside of its 10-yard line, and he made a 35-yard field goal.

Troup struck first in the game, going 65 yards for a touchdown in the first quarter.

Tight end Kenly Bridwell helped get things started with a 15-yard catch that put the ball in LaGrange territory.

Crowe and Russell both had long runs to advance the ball further down the field, and Russell completed the drive with a 6-yard touchdown run.

Wreyford made the first of his four extra points, and Troup led 7-0 with 2:18 left in the first quarter.

On Troup’s ensuing possession, Crowe completed passes to Hill and Hudson to put the ball inside the LaGrange 10-yard line.

On a second-down play, Crowe’s pass was intercepted in the end zone by Jamari Thrash.

LaGrange responded by driving 80 yards for the touchdown, and with 7:05 left in the half the game was tied 7-7.

The unflappable Crowe came right back and dropped a perfect pass about 20 yards downfield into the waiting arms of Hudson, who out-raced the defense for a 69-yard touchdown.

LaGrange pulled even moments later with a touchdown of its own, and Troup went three-and-out on its ensuing possession.

That began one of the most critical stretches of the game.

After Troup failed to get a first down, Wreyford’s punt wasn’t fielded, and the ball bounced all the way to the LaGrange 9-yard line for a 55-yard kick.

The defense stiffened and forced a three-and-out, and the Tigers took over at the LaGrange 44-yard line following a short punt.

Crowe threw a 19-yard strike to Hudson on first down, and he completed that drive with a perfect, over-the-shoulder 21-yard touchdown pass to Truitt with 30 seconds left in the half.

After the missed extra-point try, Troup’s lead was 20-14, and it looked like that would be the score at the half.

LaGrange wasn’t satisfied with sitting on the ball, though, and Perry went to the air and the ball was picked off by Martin, a sophomore linebacker who is having a stellar season.

With just three ticks on the clock, Wreyford’s 35-yard field-goal attempt split the uprights, and Troup took a 23-14 lead to the break.

The 20-minute halftime break did nothing to slow down the Tigers.

Moments into the second half, the Tigers put pressure Perry, and his pass was picked off by Willis, who rumbled about 20 yards for the touchdown.

The Tigers got the ball back moments later on a punt at their own 21-yard line.

The offense went to work.

Russell had an 11-yard run on first down, and he had an 18-yard run later on the drive before Crowe had a 22-yard keeper.

It was fourth-and-three at the 17-yard line when Troup lined up like it was going to go for it.

A LaGrange player jumped off sides, and Troup had the first down.

On the next play, Crowe rifled a pass into the back of the end zone to Hill for the 12-yard touchdown, and with 3:59 left in the third quarter, the lead was 37-14.

On back-to-back possessions, Perry had a touchdown pass and a scoring run, and just like that it was an 11-point game.

Troup ended up going for it on fourth down from the LaGrange 40-yard line, and the play was unsuccessful.

The drive was still a productive one, though, with the Tigers burning a lot of clock.

“I thought we made a couple of big third-down throws on that drive to get the ball down the field,” Glisson said. “It was tight coverage. That was a lot of poise right there.”

The Grangers made one final push and got within the shadow of the goal line, but they were denied by Mwikuta, and that was that.

Troup’s defense gangs up to make a tackle during Friday’s game. Troup won 37-26 to improve to 6-1 and win its sixth straight game. Kevin Eckleberry | Daily News

http://lagrangenews.com/wp-content/uploads/sites/37/2016/10/web1_troup3.jpgTroup’s defense gangs up to make a tackle during Friday’s game. Troup won 37-26 to improve to 6-1 and win its sixth straight game. Kevin Eckleberry | Daily News

With Kenly Bridwell providing a block, Troup’s Camren Russell takes off on a first-half run. Russell had a touchdown run, and Bridwell had two key catches. Kevin Eckleberry | Daily News

Troup’s Joko Willis (25) had an interception for a return at the start of the second half. Kevin Eckleberry | Daily News

http://lagrangenews.com/wp-content/uploads/sites/37/2016/10/web1_troup37.jpgTroup’s Joko Willis (25) had an interception for a return at the start of the second half. Kevin Eckleberry | Daily News