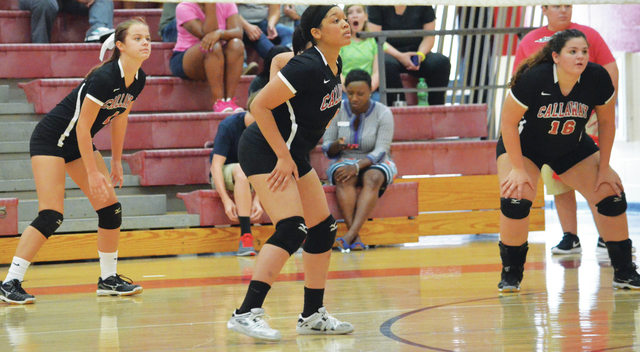 HOGANSVILLE – They’re not ready for the journey to end.

The five seniors on the Callaway High volleyball team have been together since they were in the eighth grade, and they’ve created a lot of great memories together.

They’re hoping to create one more positive memory for the mental scrapbook today.

Callaway, after finishing third in the Area 5-AA tournament, will visit Washington-Atlanta today in the opening round of the state tournament.

The winner will advance to the state quarterfinals on Saturday.

“I’m proud of us for getting that far, and I’m just excited to see what’s going to happen,” said Chantron Robinson, one of the seniors. “I hope we win.”

The other seniors on the team are Breeanne Moncus, Alexis Garner, Jasemine Drake and Bailie Bowles.

It’s a close-knit group, and Bowles said “it’s like a family.”

Bowles believes that connection helps the team perform better on the court.

“I feel like everybody’s grown. Everybody’s gotten better skills, and we’re all closer,” Bowles said. “We’re closer together, and that helps us work better as a team. We know each other.”

Moncus said the seniors, and all of the players have a “close bond,” and she believes that’s a key to the team’s success.

“We know each other’s positions on the court,” Moncus added. “We know where to put the ball, to get it to the right people.”

“We’re used to working together,” Garner added. “It’s easy to play with people you’ve been playing with for a while.”

Garner said that win or lose, it’s always an adventure, and a fun one, when she’s around her teammates.

“I love it. It’s never boring,” she said. “You have Jasemine and Bailie, and they make it fun. Even if you lose, it’s just fun being on the court with them.”

Thornton, who is one of the team’s captains along with Bowles, said “we’re able to bring out the best in each other.”

On Monday afternoon, Thornton and her teammates were on their home floor, practicing in preparation for the first state-tournament match any of the Callaway players have been a part of.

Thornton is hoping they’ll be back at home on Wednesday getting ready for the second round of the state tournament.

“We’re really looking forward to it,” Thornton said. “We’re ready to play, get our feet on the court, make good plays, and play together as a team. And make sure this isn’t the last game.”

The team’s head coach is Heather Smith, and she said it has been a joy to work with all of the players.

“I look at this practice, and I have five seniors, I have four juniors, and then two freshmen,” Smith said. “So we have a good variety. I can’t help but smile when I think about it. All of these girls are different, but they all fit. They all bring something to the court. We have some girls that what they don’t have in height, they make up in heart. I see that a lot.”

Smith said she appreciates the commitment each of the players has shown.

“They play because they love it, because they want to be here,” Smith said. “There’s lots of teams that would love to be where we are right now.”

Smith said that commitment extends to a former player as well.

Brianne Vaught, a senior, was a member of the team in previous years, but she is attending classes at Columbus State this fall, so she was unable to play volleyball.

Smith said Vaught is still a part of the family, though.

“When we had our picture taken at the beginning of the season, our team voted to have her in the picture,” Smith said. “She’s been here for every game, and she’s been our biggest cheerleader.”

Smith said she and the players are grateful for the support shown by other athletes and coaches at the school.

“We’ve had a lot of cross-sport support,” Smith said. “We’ll have football players come watch our games, and softball comes. We’ve had a lot of people come in and watch when they can. If they haven’t watched, they’ll send a text and ask how the game went.”

Thornton said that support is “nice to see.”

“Other teams, they come out and support us, and the administration is really good about coming out and supporting us,” Thornton said. “It’s really nice to know you have other people coming out to support you.”

The Callaway High volleyball team, after finishing third in Area 5-AA, will visit Washington-Atlanta today in the first round of the state tournament. Kevin Eckleberry | Daily News

Callaway’s Jasemine Drake goes up to block a shot during a match this season. Drake is one of five seniors on the Callaway team. Kevin Eckleberry | Daily News

http://lagrangenews.com/wp-content/uploads/sites/37/2016/10/web1_volleyball3-1.jpgCallaway’s Jasemine Drake goes up to block a shot during a match this season. Drake is one of five seniors on the Callaway team. Kevin Eckleberry | Daily News

The Callaway Lady Cavaliers can advance to the elite eight of the state tournament with a win today. Kevin Eckleberry | Daily News

http://lagrangenews.com/wp-content/uploads/sites/37/2016/10/web1_volleyball2-3.jpgThe Callaway Lady Cavaliers can advance to the elite eight of the state tournament with a win today. Kevin Eckleberry | Daily News