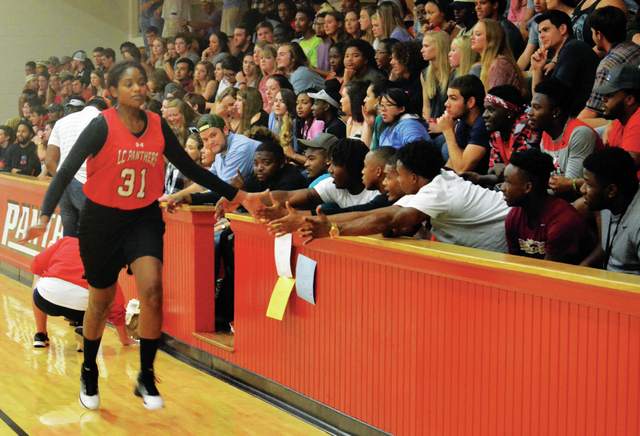 LAGRANGE – It was midnight madness in Mariotti Gym.

Hundreds of fans turned out on Friday night to get a first look at the men’s and women’s basketball teams at LaGrange College.

Saturday marked the first day NCAA Division III teams could hold official practices, and to mark the occasion, fans and students were invited to Mariotti Gym to be a part of midnight madness, a tradition shared by colleges across the country.

Each member of the men’s and women’s teams were introduced during the event, which began at 11:30 p.m. on Friday and filtered over into Saturday morning.

Both teams are gearing up for a season that begins in less than a month.

LaGrange College’s men’s team, which has been on an extremely successful run under head coach Kendal Wallace, kicks off its season on Nov. 15 with a home game against Pensacola Christian.

LaGrange College’s women’s team begins its season in the Pensacola Christian Classic, and its first game will be against Randall on Nov. 17.

The men’s team comes into a new season having reached the Division III national tournament for three consecutive seasons.

The Panthers won the USA South tournament championship in 2014 and 2015, and it returned to the NCAA tournament as an at-large team a year ago.

The Panthers are hoping to keep that run of success going this season, and it helps that former LaGrange Granger Justyn Olson is back for his senior season.

Olson led the team in scoring last season at 16.7 points per game, and he was among the USA South leaders in a number of other categories.

This will be Olson’s third and final season as a member of the LaGrange College program.

In addition to Olson, Alex Bonner also returns after scoring 12.5 points per game last season while leading the team in rebounding.

Drew Vanderbrook, who scored 11.3 points per game last season, also returns, as do a host of talented players who will be getting a lot more playing time this winter.

One of the players Olson thinks is ready to take a major step up is Elijah Adedoyin, who provided a spark off the bench last season while playing 12 minutes a game.

“Elijah is going to be a big player for us,” Olson said. “And I think some of our JV that were freshmen, they’re going to be key for us. I like to think of it as we’re reloading. It should be a good year for us. We’ll see.”

Wallace has brought in six freshmen to bolster the roster.

LaGrange College’s women’s team had a stellar 2015-2016 season that ended with a loss in the semifinals of the conference tournament.

Among the players head coach Lee Buchanan will be counting on to lead the way is junior guard Lauren Johnson, who led the team with nine points per game last season.

Also back is sophomore Marilauren Farr and senior Kelsey Walthall, who were among the team’s scoring leaders last season.