Callaway’s Atkins gets the tough yards 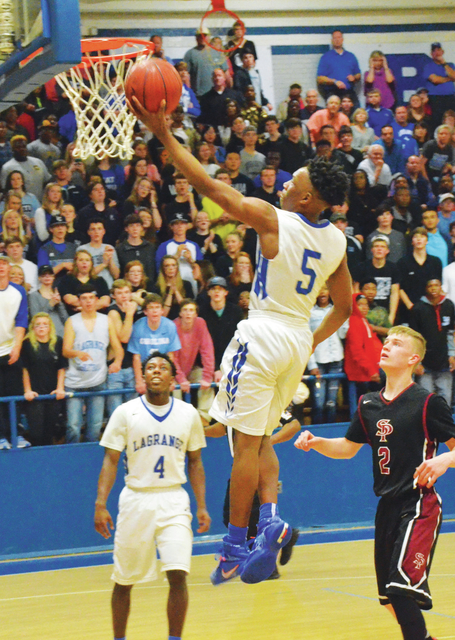 LAGRANGE – Callaway’s DJ Atkins has consistently shown he has the speed and elusiveness to make opposing defenses look silly.

Since making his Callaway debut in a preseason game against Northside, Atkins has been leaving defenders in his wake.

Atkins’ game isn’t all about leaving defenders behind, though.

Atkins, as he showed in last week’s game against Heard County, can also get the tough yards, and he has the strength and determination to meet defenders head on.

While his yards-per-carry average wasn’t what it usually is, it was one of his most impressive performances of the season.

In a game where yards were difficult to come by on both sides, Atkins’ tough runs helped Callaway keep the chains moving.

Atkins had one of Callaway’s three rushing touchdowns in the game, and quarterback Dylan Johnson and tight end Michael Freeman had the others.

Following Friday’s victory over sixth-ranked Heard County, Atkins said he enjoyed the chance to show that he can be a possession back, as well as a big-play one.

“I can keep punching, get first down after first down,” Atkins said. “I do enjoy that. Besides the Handley game, this was the one where I kept getting tripped by my ankles and stuff. I had to keep pushing, just keep getting first downs. I really enjoyed it.”

While Heard County was able to keep Atkins from ripping off the long runs that have become so commonplace, Callaway still enjoyed a productive offensive day.

“At halftime, we said we were going to keep pounding, and keep getting the three and four yard gains,” Callaway head coach Pete Wiggins said. “Let’s keep running the ball. I was proud of the kids’ physicality.”

Atkins credited the offensive line for helping give him the openings to keep moving forward.

“I appreciate them a lot,” Atkins said. “They grind. They come out here and block 100 percent for me. I feel happy when they do their job. They pat me on the back. We motivate each other. We do that all game.”

Callaway’s most explosive play against Heard County came on a trick play.

On Callaway’s first possession, wide receiver Braylon Sanders completed a 57-yard pass to DQ Wilkerson, and that led to a 9-yard scoring run from Atkins early in the second quarter.

Mostly, though, it was all about grinding out the tough yards and keeping the chains moving.

Callaway’s second scoring drive was a fine example of that.

The Cavaliers took over at their own 40-yard line following a punt, and they went 60 yards in 10 plays, and they converted two third downs on the drive.

Atkins had seven carries for 31 yards on that possession, and Johnson finished things off with a 13-yard touchdown run.

In the third quarter, Callaway had a 52-yard touchdown drive that lasted nine plays.

Wilkerson had an 8-yard catch from Johnson on third down that resulted in a first down, and Freeman took a handoff and scored on a 13-yard run to cap the drive.

Once again Atkins was the work horse on the drive with five carries for 28 yards.

Later in the third quarter, Noah Stephens made a 42-yard field goal after Callaway recovered a fumble deep in Heard County territory.

In the fourth quarter, as Callaway looked to nurse the clock with a 24-7 lead, Atkins had back-to-back runs of nine and 15 yards, and Tely Fanning added a 7-yard carry on the same drive.

LAGRANGE: A bright spot in what has been a disappointing season for LaGrange has been the performance of sophomore wide receiver Jamari Thrash, who has been one of the team’s top play-makers.

In Friday’s 37-26 loss to Troup, Thrash was quarterback LaPerion Perry’s favorite target with a pair of touchdown receptions.

In the second quarter, Perry tossed an 8-yard touchdown catch to Thrash.

Perry rolled to his right, and lofted the ball just over the hands of a defender, and Trash made the catch in the end zone.

Trash’s second touchdown came in the the third quarter.

Trash made the catch short of the end zone, and he was able to stretch the ball across the goal line for the 8-yard touchdown.

It was Thrash’s second two-touchdown game of the season.

In a win over Central-Carroll, Thrash had touchdown catches of 14 and 37 yards from fellow sophomore Jakoby Smith, one of the men who filled in for Perry while he was out of action.

“He’s only a sophomore, so I’m excited to see what’s going to come in the future,” LaGrange head coach Dialleo Burks said of Trash. “My heart is with wide receiver, because I played wide receiver. I like to see them grow, and get to that level. He’s playing at a high level right now.”

Another player who has been producing all season is Ogletree, who has gone back-and-forth between quarterback and running back this season.

Ogletree has settled into the running-back position in recent weeks, and he had a 49-yard catch moments before Trash’s second touchdown against Troup.

Also getting involved in the passing game last week was senior DeAnthony Rachel, who had a 21-yard catch from Perry on LaGrange’s final possession of the game.

Junior Bo Russell has been a favorite target of whoever the quarterback has been this season, and he had a handful of catches against Troup.

The most difficult catch of the night came in the game’s closing moments when senior Jalen Wilson somehow made a catch between a pair of Troup defenders on a fourth-down play.

The 46-yard circus catch set the Grangers up inside the Troup 10-yard line, but an interception two plays later sealed their fate.

Ogletree and Cornell Kendrick have been the two primary cogs in the running game this season, but against Troup, it was Perry accounting for nearly all of the rushing yards.

Perry ran for more than 200 yards, and that included scoring runs of 17 and 50 yards.

Perry also had more than 200 passing yards, and on his final play, he heaved the long pass to Wilson that kept hope alive for the Grangers, who were down by 11 at the time.

Perry took a hard shot on that play and was unable to return to the field, and Smith entered the game in his place.

It was a remarkable night for Perry, who was playing in his third game after missing the first five games of the season while recovering from offseason surgery.

Callaway’s DQ Wilkerson had a pair of key catches during the win over Heard County, including a 57-yard reception on a touchdown drive in the first half. Kevin Eckleberry | Daily News

http://lagrangenews.com/wp-content/uploads/sites/37/2016/10/web1_CHS-wilkerson.jpgCallaway’s DQ Wilkerson had a pair of key catches during the win over Heard County, including a 57-yard reception on a touchdown drive in the first half. Kevin Eckleberry | Daily News

Seniors LaPerion Perry and Amad Ogletree both had their share of big offensive plays during the Troup game. Kevin Eckleberry | Daily News

http://lagrangenews.com/wp-content/uploads/sites/37/2016/10/web1_LHS2-5.jpgSeniors LaPerion Perry and Amad Ogletree both had their share of big offensive plays during the Troup game. Kevin Eckleberry | Daily News