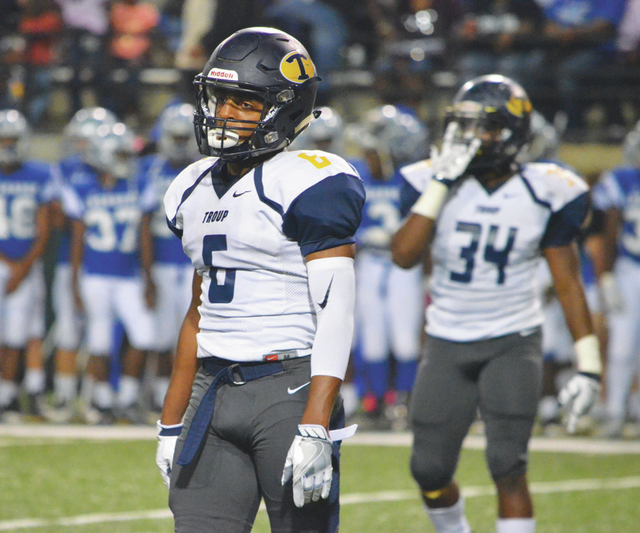 LAGRANGE – He shrugged it off.

In the first half of last week’s game against the rival LaGrange Grangers, Troup quarterback Montez Crowe threw an interception in the end zone.

LaGrange responded by driving 80 yards for a touchdown to pull even at 7-7.

It was a pass Crowe knew he shouldn’t have thrown, but he didn’t dwell on it.

The next time Crowe dropped back, he threw a perfect pass into the arms of Kobe Hudson 20 yards down the field, and the freshman ended up taking it the distance for a 69-yard touchdown.

Crowe was sharp the rest of the way, and he had his typically strong game to help Troup beat LaGrange 37-26.

Troup (6-1 overall, 3-0 in Region 5-AAAA) has won six straight games and is tied for first place in the region thanks in large part to the contributions of Crowe, who has excelled in his first full season as a starter.

With three regular-season games to go and at least one playoff game, Crowe could be looking at a 2,000-yard season.

Crowe has also been effective running the ball with 169 yards, and he has scored four touchdowns.

Crowe’s primary strength is his ability to stand in the pocket and put the ball where it needs to be, though.

Crowe has a strong and accurate arm, and he is unphased when opposing defenses manage to get pressure on him.

And when Crowe does make mistakes, he moves on and doesn’t let it impact his performance.

Two of Crowe’s most impressive throws didn’t result in touchdowns, or even lead to a score, but they were critical nonetheless.

In the fourth quarter, Troup had the ball leading by 11 points, and it was looking to run some clock.

On two third-down plays, Crowe threw the ball into tight coverage, but the catches were made by Kenly Bridwell and Hill.

Troup ended up failing on a fourth-down play in LaGrange territory, but it used up more than four minutes.

“I thought we made a couple of big third-down throws on that drive to get the ball down the field,”Glisson said. “It was tight coverage. That was a lot of poise right there.”

Crowe has plenty of weapons to choose from.

Four different wide receivers have at least nine catches, and Camren Russell has seven catches out of the backfield.

Kobe Hudson, who has had a remarkable freshman season, has 15 receptions for 493 yards, a per-catch average of 33 yards.

Macenta Stafford has nine catches for 146 yards with one touchdown, and Russell’s seven catches have accounted for 126 yards.

Bridwell, a tight end, has four catches for 67 yards, and he had two key catches during the LaGrange game.

Jackson Davis, a running back who was unable to play in the LaGrange game, has a pair of catches, and Jack Schweizer and Dre Flagg each has one reception.

While Troup has enjoyed immense success in the passing game, the ground game has been effective as well.

Russell leads the team with 465 yards on 83 attempts with eight touchdowns, and Davis has 45 carries for 231 yards with three touchdowns.

Russell and Davis have also done a great job of hanging onto the ball with just one lost fumble apiece.

That number is particularly impressive for Russell considering how many times he has carried the ball.

“Cam’s our steady rock, and he’s important,” Glisson said. “He’s a hard guy to get down. And his ball security is great, so that was big.”

In the LaGrange game, Russell had to leave twice because of a knee injury, but both times he returned.

Russell said he felt it was important to fight through the injury and stay on the field, especially with Davis unable to go.

“They view me as a leader,” Russell said. “Me doing that, I believe it allowed them to step up and make big plays.”

Leading the way is an offensive line that is coalesced into a stellar unit.

Troup’s offense faces a major test on Thursday against Cedartown, which brings a 5-2 record into the region showdown.

If Troup wins that game, it would finish no lower than second in the region, and it would play for a region championship in the regular-season finale against Cartersville.

Troup quarterback Montez Crowe drops back to pass during last week’s game against LaGrange. Crowe had three touchdown passes, and he set a school record for yards in a season. Kevin Eckleberry | Daily News

http://lagrangenews.com/wp-content/uploads/sites/37/2016/10/web1_troup1.jpgTroup quarterback Montez Crowe drops back to pass during last week’s game against LaGrange. Crowe had three touchdown passes, and he set a school record for yards in a season. Kevin Eckleberry | Daily News

Camren Russell is Troup’s leading rusher, and he had a touchdown against LaGrange. Kevin Eckleberry | Daily News

http://lagrangenews.com/wp-content/uploads/sites/37/2016/10/web1_troup-russell-1.jpgCamren Russell is Troup’s leading rusher, and he had a touchdown against LaGrange. Kevin Eckleberry | Daily News

Chanse Hill has been one of Troup’s leading receivers this season, and he had a touchdown catch against LaGrange. Kevin Eckleberry | Daily News

http://lagrangenews.com/wp-content/uploads/sites/37/2016/10/web1_troup-hill.jpgChanse Hill has been one of Troup’s leading receivers this season, and he had a touchdown catch against LaGrange. Kevin Eckleberry | Daily News