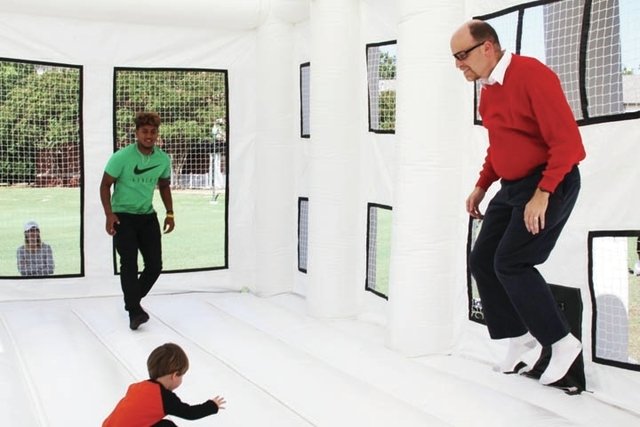 LaGRANGE – College students snacked on doughnuts as they reviewed lists of political issues to send to congressional nominees while their peers played in a adult-sized bounce house shaped like the White House on Thursday morning on the LaGrange College lawn.

The event was was designed by the One Campaign, a global advocacy organization that works to bring an end to extreme poverty, with a focus on sub-Saharan Africa, to bridge the gap between what voters want and the issues that congressional representatives hear about.

“We launched (One Vote 2016) at the (Republican National Convention) and took it to the (Democratic National Convention), and now we’ve been going all over the country asking the presidential candidates along with candidates who are running in the open house and open senate seats to have a plan to fight extreme poverty when they enter office,” said Maggie Bridges, One Vote’s campaigns representative.

The One Vote 2016 campaign aims to make the voices of voters heard by asking people to check off what issues are important to them and send them to Congressional representatives running for office in this election.

“I think it is really important because with this house race you are going to have a new member of congress in Georgia’s congressional district no matter what happens,” said Claire Hazelgrove. “So, I think it is really important that right as they are coming in they hear from their voters as to what matters most to them, and absolutely today what we’ve been hearing from today is great college students who are very engaged. Global issues really matter for them too. They care about their families, their communities, but also their global communities.”

The campaign is nonpartisan and sends information on issues to candidates on both sides of the aisle. The campaign plans to send a petition with thousands of signatures to both presidential candidates asking for them to create a plan to deal with poverty.

“I think the focus on extreme poverty is big because it isn’t really covered in the debates, so this raises the consciousness level,” said Dr. John Tures, a professor at LaGrange College. “I am really glad that people are getting to see what it is like in Africa. That (virtual reality) tour was very realistic.”

The campaign allowed people to virtually visit sub-Saharan Africa to see what life is like for the people that the campaign hopes to help, including the life of Doris, a woman infected with HIV.

“It makes it feel like you are there,” said LaGrange College student Matt Murray of the virtual simulation. “… It makes it more real. It kind of makes you realize what it is really like.”

Early voting is available now through Nov. 4, with voting hours also on Saturday, Oct. 29, at the Troup County Government Building. For more information about One Vote visit onevote16.org.