Can Lady Tigers take the next step? 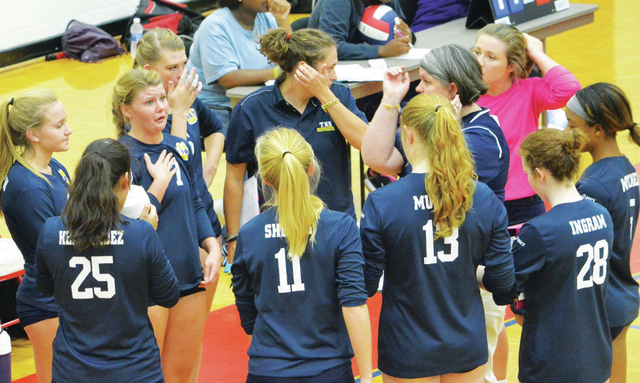 LAGRANGE – Two decades ago, Jodi Dowden was in on the ground floor.

Troup High was beginning a volleyball program, and Dowden agreed to come over and lend a hand.

Dowden was a volleyball player at LaGrange College at the time, and she thought it would be an interesting opportunity.

“That was fun,” said Dowden, who served as an assistant coach on that first team. “It was an exciting time.”

The program has come a long way from those days 20 years ago.

Under Dowden, who returned to Troup and took over the volleyball program nine years ago, the Lady Tigers have thrived.

The Lady Tigers have made it to the state tournament multiple times under Dowden, and last week, they reached a milestone when they won a state match for the first time in school history.

Today, Troup will look to take another step when it visits Ridgeland in a second-round match, with the winner advancing to the elite eight.

The Lady Tigers, who finished third in Area 5-AAAA to earn their state invitation, are a confident bunch.

They’ve played a grueling schedule, but they’re 21-14, and they earned a straight-sets win over Burke County last week in a first-round match.

“If we stay focused, we definitely can win,” said Bailey Lawson, one of eight seniors on the Troup roster. “All of our hard work, from all of the years put together, is finally showing, and finally coming together.”

Another one of the senior’s Jayde Dowden, said the team can prevail if the players do what they’re supposed to.

“If we play our best game, we’ll win,” she said. “It’s about communicating and playing smart. We have to play smart all the time.”

Jodi Dowden said the formula for success is the same now as it was when the season began.

“We have the same strategy,” she said. “Our strategy is defense first, and take care of the ball on our side of the court.”

Of the eight seniors, most of them have been playing together since they were in middle school, and they’re all close friends.

The bond between the coach and the players is a close one as well, and that extends beyond what takes place on the volleyball court.

Jodi Dowden had a recent bout with cancer, and the members of the team were there for her, and that included Jayde Dowden, her daughter.

Jayde Dowden said the opportunity to be there for her mother these past few years has been “really special,” and she’s glad the two of them have been able to share this experience of advancing in the state tournament together.

“It’s just something to hold onto forever,” Jayde Dowden said. “I’ll always remember going to the sweet 16 with my mom, and hopefully pushing forward. She’s coached through it all.”

Lawson said all of the players are close to coach Dowden, and that they’re glad to be able to help her get over the hump at state.

“Coach Dowden hasn’t made it past the first round with any other team at Troup,” Lawson said. “I’m proud that we could do that with her. She’s pretty much like everybody’s second mom, being there for us.”

When the current seniors were freshmen, Troup reached the state tournament and fell in the first round.

The Lady Tigers didn’t qualify for state in 2014 or 2015, so the eight seniors knew this was their final chance to achieve a goal they’d set for themselves.

“We’ve always talked about our senior year going to state, and here we are,” Lawson said.

The players weren’t satisfied with just reaching state, though.

They wanted to win, and they did just that in dominant fashion against Burke County last week.

“After we got done, our parents came out there and high-fived us and everything,” Lawson said. “It felt like we had won the championship. Each time we win, it’s going to feel that great.”

The winner of today’s match will play either North Oconee or Blessed Trinity in the quarterfinals, and then it would be on to the final four to play either Columbus or Woodward Academy.

The championship game is at Marietta High on Oct. 29.

The Troup High volleyball team will play Ridgeland in the second round of the state tournament today. Kevin Eckleberry | Daily News

Troup head coach Jodi Dowden meets with the players during an area-tournament match against Cartersville. Dowden is in her ninth season as the head coach. Kevin Eckleberry | Daily News

http://lagrangenews.com/wp-content/uploads/sites/37/2016/10/web1_dowden.jpgTroup head coach Jodi Dowden meets with the players during an area-tournament match against Cartersville. Dowden is in her ninth season as the head coach. Kevin Eckleberry | Daily News