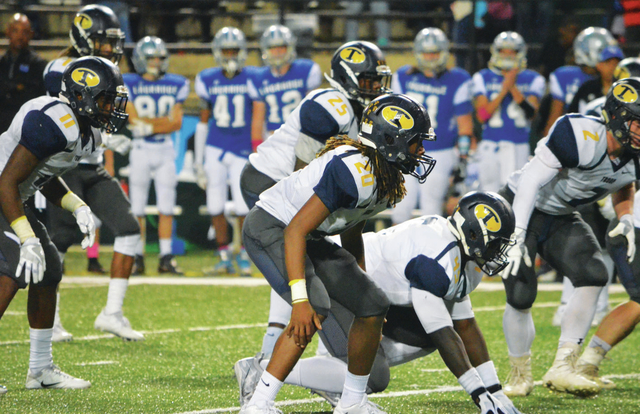 LAGRANGE – If the plan comes together tonight, the Troup Tigers will be back at Callaway Stadium in three weeks.

Troup will play its final home game of the regular season tonight against the Cedartown Bulldogs, and there’s plenty at stake.

If Troup wins, it would not only guarantee itself a spot in the state playoffs, but it would finish no lower than second in Region 5-AAAA.

That means, if Troup beats Cedartown, it would be at home for the first round of the state playoffs, and it would play Cartersville in two weeks for the region championship.

Troup closes the regular season with road games against winless Central-Carroll and a Cartersville team that is unbeaten and ranked first in the state.

“Win, you clinch at least a number two seed, and you also clinch the opportunity to go play Cartersville for the region championship, regardless of what you do against Central,” Troup head coach Tanner Glisson said. “That’s a good position to be in.”

Cedartown also has plenty to play for.

The Bulldogs (5-2 overall) are 2-1 in the region, and they are still very much in contention for one of the region’s top two spots as well.

Cedartown would love to duplicate its performance from its most recent trip to Callaway Stadium.

“They’ve got a really good football team,” Glisson said. “They’re sitting at 5-2. They lost to Piedmont in Alabama, and they lost to Cartersville. They beat Pepperell, which is ranked number eight and only lost to Cedartown. They’ve done a tremendous job. They’re really well-coached. You can tell they’ve been in the weight room. They’re real big. They’ve got several 300-pounders.”

In the LaGrange game, Cedartown found itself trailing 17-0 at the half, but it dominated the second half to get the critical region win.

“What they did against LaGrange was impressive,” Glisson said. “They were down 17-0. So we’ve got to play. We’ve got to bounce back very, very quickly.”

It has been a special season for the Tigers (6-1 overall), who have won six in a row and are 3-0 in the region following last week’s 37-26 win over rival LaGrange.

Troup’s players didn’t have a whole lot of time to dwell on the LaGrange game, not with another critical test coming up so shortly.

Playing on Thursday instead of Friday meant Troup’s schedule had to be adjusted, and that has made for a busy week.

“We practiced Sunday night, and Monday, Tuesday, and this morning,”Glisson said Wednesday afternoon. “So we’re running on fumes right now. We’ve got to be ready to go.”

Glisson made sure to let the players know as soon as last week’s game ended that it was time for them to turn their attention to Cedartown.

“Whether we play on Thursday or Friday, the big deal is coming off an emotional high,” Glisson said. “I told them last week, this game is so much bigger because of the playoff implications.”

LaGrange made Troup work for it.

The Tigers led 37-14 in the third quarter, but the Grangers rallied and got within 11 late in the game.

LaGrange had the ball on the Troup 1-yard line with minutes left in the game and the outcome was still in doubt.

Moments later, Troup’s King Mwikuta came through with an interception in the end zone to clinch the win.

Glisson said the defense was ready for the pass, even though LaGrange was just one yard from the end zone.

“We felt like they were going to throw it,” Glisson said. “We had seen that on a couple of two-point conversion plays and a couple of other things. That’s why I’ve said all year long these coaches we have do a great job. There is no stone unturned.”

The game turned in Troup’s favor late in the first half.

In the final minute of the half, Troup got a 21-yard scoring pass from Montez Crowe to Ken Truitt, and following a Kevin Martin interception, Carson Wreyford made a 35-yard field goal to make it a 23-14 game at the break.

“The last five minutes of the second quarter is crucial,” Glisson said. “We wanted to go into halftime with momentum. And dang if we didn’t get a good punt (by Wreyford), call a couple of timeouts and get the ball back and score, and then get a field goal to give us a nine-point lead going into the half.”

The momentum continued early in the second half when Joko Willis returned an interception for a touchdown, and Crowe then threw a 12-yard scoring pass to Chanse Hill to push the lead to 37-14.

LaGrange rallied, but the night belonged to Troup.

Troup’s defense gave up a bunch of yards with LaPerion Perry doing some special things at quarterback for LaGrange, but Glisson felt the players did some good things on that side of the ball.

Most notably, Troup forced three turnovers, with Martin, Willis and Mwikuta each picking off passes.

“Defensively, when LaPerion got into space, several times we froze and watched him. That was kind of frustrating,” Glisson said. “But we played really hard, and kind of got them out of what they wanted to do offensively.”

The Troup Tigers would finish no lower than second in Region 5-AAAA with a win over Cedartown tonight at Callaway Stadium. Kevin Eckleberry | Daily News

http://lagrangenews.com/wp-content/uploads/sites/37/2016/10/web1_troup1-1.jpgThe Troup Tigers would finish no lower than second in Region 5-AAAA with a win over Cedartown tonight at Callaway Stadium. Kevin Eckleberry | Daily News