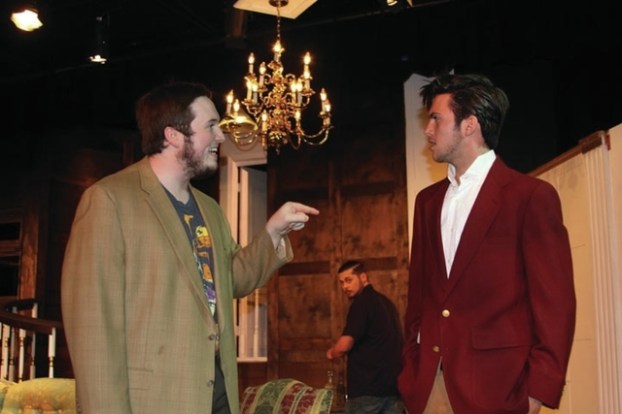 LaGRANGE – From the LaFayette Society for the Performing Arts to New Horizon Community Theatre, local theatres are planning to put on some great shows for the community this weekend.

And Then There Were None

LaGrange’s own LSPA plans to transport its audience to the English coast for a few hours with their performance of Agatha Christie’s And Then There Were None. The play tells the story of eight people who have apparently received an invitation to vacation on an island, but soon find their lives at risk because of their past crimes.

“The play doesn’t differ much in a lot of the surface details (from the book),” said Austin Tidwell, who plays Philip Lombard. “It does differ in one very important way… (but) I don’t want to give it all away.”

The play was adapted by Agatha Christie herself for the stage from her book that was originally titled Ten Little Indians after a nursery rhyme where the Indians go away one by one, much like the characters in the play.

“It’s a phenomenal story,” said Shawn Morvy, who plays Judge Lawrence Wargrave. He notes that his character would probably prefer the book’s ending over the play’s ending.

The cast carefully considered their characters and got to know them personally before the play, they said.

“Vera is modern and open, and I would say trusting as opposed to (Emily Brent) not being trusting,” said Kelly Finley, who plays Vera Claythorne. “And, ready to take on the world.”

The success of plays like this feed into other LSPA programs like the ballet and choral programs, while giving thespians in LaGrange somewhere local to go to for the theatre community.

“The stability of LSPA has strengthened and allowed theatre to blossom in this town,” said Melissa Stanley, who plays Emily Brent. “… I think that LaFayette Theatre Company has really grown and matured because we have a place to call home.”

The drama takes a turn to the Massachusetts Bay Colony in 1692, with Arthur Miller’s play, The Crucible, at New Horizon Community Theatre. The Tony award winning play tells of the Salem witch trials, and how they tore a Puritan community apart with lies and wild accusations.

“We don’t often do serious dramas here,” said Amy McDow, who plays Elizabeth Proctor. “We tend to do musicals and comedies, but every once in a while, we like to challenge the actors and taking things from classic literature is always a plus for us. As actors, (it) is a time for us to stretch ourselves, challenge ourselves in a role that we don’t normally attempt.”

The actors at New Horizon looked deeply at their characters and got to know how how they would react to the trials that they faced in Salem, she said.

“I studied different variations of (the play), different productions,” said Chase Golden, who plays Thomas Putnam. “(I) looked online, read different scripts because everybody has their ideal way of handling Thomas Putnam.”

Many people may remember The Crucible from high school English class, but the cast of the play encourages the audience to give the play another deeper look.

“I’m in high school, so I’ve had a lot of experience with The Crucible, but I think that the more I’m around it, the more I like it, and the more I understand the subtext of it,” said Isabel Brown, who plays Abigail Williams. “… It is really moving, and you can always learn something new from it.”

Much of that subtext comes from the period when the play was written. Miller wrote The Crucible in 1953, during the Red Scare where the U.S government led by Senator Joseph McCarthy persecuted people based on often unsubstantiated claims of communist affiliations.

“It was fascinating to see the parallels between McCarthyism and why Arthur Miller actually wrote the play and attempted to use it as a parable for people to understand the errors of the Communist witch hunts that were happening during that time,” said McDow. “A lot of people actually compare it to things that are happening in our world today.”

The New Horizon Theatre is located at 411 W 8th St., West Point. The Crucible opened on Thursday and is scheduled to run through Saturday with shows at 8 p.m. tonight and 2 p.m. and 8 p.m. on Saturday. Tickets can be purchased at www.NHCT.com and are $16 for adults and $13 for students, seniors, and military.

The cast of New Horizon Community Theatre will perform The Crucible in West Point this weekend.

http://lagrangenews.com/wp-content/uploads/sites/37/2016/10/web1_LAG10212016TheaterCrucible.jpgThe cast of New Horizon Community Theatre will perform The Crucible in West Point this weekend.

The LaFayette Society for Performing Arts cast members practice And Then There Were None on Sunday night.

http://lagrangenews.com/wp-content/uploads/sites/37/2016/10/web1_LAG10212016TheaterLSPA.jpgThe LaFayette Society for Performing Arts cast members practice And Then There Were None on Sunday night.