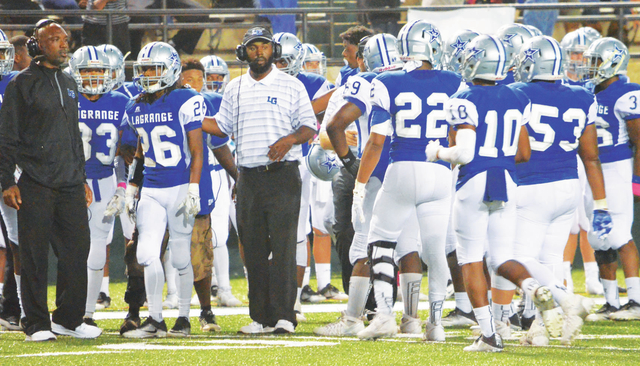 It has been a difficult season for the Grangers, who are 2-6 overall and 1-3 in Region 5-AAAA, but they still have plenty to play for.

LaGrange has two region games remaining, and if it wins them both, it will most likely earn one of the region’s four playoff berths.

LaGrange will be at home for both of those games, first against Sandy Creek tonight, and then against Chapel Hill next week.

“There’s still something to play for,” LaGrange head coach Dialleo Burks said. “The goal is still in tact.”

The Grangers are coming off last week’s 37-26 loss to the Troup Tigers in a game where they rallied from 23 points down in the third quarter to make a game of it.

When it looked like Troup was going to win going away, LaGrange made a charge and got as close as 11 points and had the ball on the 1-yard line late in the game.

If LaGrange had scored a touchdown, it would have had a chance to possibly recover an onside kick and win the game.

Instead, Troup’s King Mwikuta picked off a pass in the end zone to seal LaGrange’s fate.

It was the Grangers’ second region loss at Callaway Stadium, and they were both games they could have won.

After a 52-7 road loss to top-ranked and unbeaten Cartersville, LaGrange returned to Callaway Stadium and played Troup and lost a hard-fought game to its county rival.

LaGrange may have to find a way to win tonight without the services of quarterback LaPerion Perry, who had a remarkable effort against Troup.

Perry, a senior, combined for more than 400 yards on the ground and in the air, and he had two touchdown runs and threw a pair of scoring passes to sophomore Jamari Thrash.

Perry took a big shot at the end of the Troup game while heaving a pass downfield and had to come out.

Perry, showing his toughness, hung in there and delivered a perfect pass on fourth-and-long, and senior Jalen Wilson went up and made the catch inside the 10-yard line, but LaGrange was unable to score.

If Perry can’t go, sophomore Jakoby Smith could get the call, and Amad Ogletree and Nathan Cronic have also played quarterback this season.

On the flip side of the health issue, senior defensive lineman James Clark returned for the Cartersville game two weeks ago, and he played the whole game against Troup and made an impact.

Injuries have been a major issue for LaGrange the past two years, and it continues to impact the team.

“It seems like that’s been our story for the past two years, injuries,” Burks said. “So we’ve got to get a rabbit’s foot in our pocket somehow.”

Today’s opponent, Sandy Creek, is also desperate for a win.

The Patriots were ranked as high as fourth in the state earlier in the season, but they’re 1-2 in the region after losses to Troup and Cartersville.

If Sandy Creek loses tonight, it would be in real danger of missing the playoffs.

Burks said he’s hopeful some changes that have been made on defense will help the Grangers slow down the Patriots’ potent running attack.

Burks will also be looking for a better performance from the secondary after giving up three touchdown passes against Troup, including one that covered 69 yards from Montez Crowe to freshman Kobe Hudson.

“We’ve got some guys in some different spots that have brought a spark to us defensively,” Burks said. “Last week, we picked a real bad time to be young, especially in the secondary. And they found it. But, I told them, the guy who did it to you is a freshman, so you can’t use that one as an excuse.”

The LaGrange Grangers will try to keep their playoff hopes alive with a home win over Sandy Creek tonight. Kevin Eckleberry | Daily News