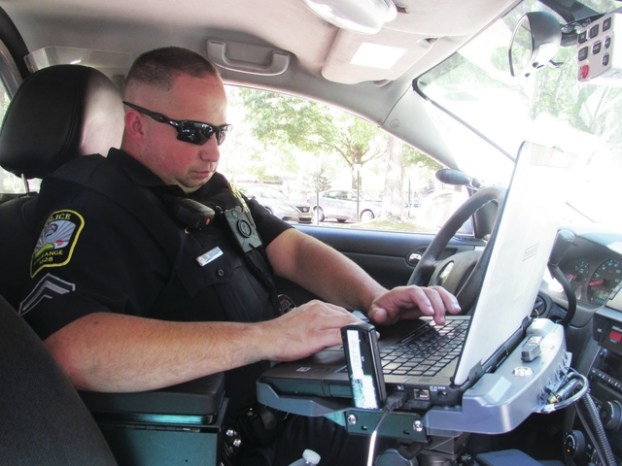 ‘It’s the way God intended me to be’

LaGRANGE — Senior Patrol Officer Garrett Pressley is no stranger to hospitals – nor people’s stares and blunt questions when out on patrol with the LaGrange Police Department.

The Troup County native was born with a birth defect, missing his left ear and part of his left jaw bone. Pressley was also deaf on the left side.

From that point on, the 34-year-old endured several surgeries to try and rebuild his face. Doctors reconstructed Pressley’s jaw by surgically removing a portion of his skull. Surgeons also removed cartilage from his rib to build a prosthetic ear.

In order for Pressley to wear the new ear, doctors also had to implant metal rods into the side of his skull, he said.

“It was aggravating,” he remembered. “The material the prosthetic ear was made from caused my face to break out … my friends asked me why I wore it (ear)? ‘It doesn’t match your skin tone or even look like you,’ they said. So I never wore it from that day forward.”

Pressley was in middle school at the time and said he was never bullied, but still experienced uncomfortable stares.

But the patrol officer said those awkward moments never made him bitter or angry about his birth defect. Instead, he embraced it.

“Growing up, I always saw a lot of special needs kids at hospital,” Pressley explained. “Everyone had different needs and was there there for various reasons, but I never looked at them differently.”

The experience also did not deter Pressley from pursuing his childhood dream of becoming a police officer – even after he was turned down by the military and the Georgia State Patrol.

“They wouldn’t take me because I was deaf on one side. I have a middle ear, but no outer or inner ear,” he explained. “I started working at the Troup County Correctional Institute when I was 18 years old and made it to rank of sergeant. Then I transferred to the Troup County Jail and worked there for almost three years.”

Pressley also volunteered his time to work with the Troup County Sheriff’s Office junior deputy and D.A.R.E. programs. He was often disguised as “McGruff the Crime Dog.” It was during those events Pressley still felt called to help others.

The 34-year-old passed with flying colors and signed on as a deputy with the Troup County Sheriff’s Office. He joined the LaGrange Police Department in March 2011.

Pressley learned to incorporate his physical differences into becoming a better law enforcement officer in the community.

“I don’t think it hinders me at all,” he said. “I don’t mind if people ask me about my birth defect, it’s the way God intended me to be. I use to to my advantage to talk to kids. If they’re feeling bullied. I say, ‘Well look at me, I only have one ear. But I still played baseball in high school. I now coach softball, I became a police officer.’ I chat with kids who get in trouble and end up in the back of my patrol car. I made the best of what I was given. I still had dreams that I pursued on my own. They can still pursue their’s too, if they start taking the right path.”

Pressley still finds plenty of time to help folks outside the city limits of LaGrange, too.

In 2013, the Senior Patrol Officer coordinated a fundraiser for the “One Fund Boston” a charity set up to assist the victims of the Boston Marathon bombing. Pressley set up a race in LaGrange and sold t-shirts. The event raised more than $8,000 for the bombing victims.

A short time later, Pressley, LPD Sgt. Jeremy Butler and LPD Cpl. Mike Barton traveled to Boston and presented the money to the Watertown Police Department. Pressley was honored for his work by the WPD Chief at an annual conference in January.

The 34-year-old officer never felt limited by his birth defect and continued to move up the ranks within the LaGrange Police Department.

In 2013, Pressley became a Drug Recognition Expert (D.R.E.), which means he can testify as an expert in trials related to drinking while under the influence. He is currently the only officer in Troup County to attain the certification and one of 266 D.R.E.’s in the state of Georgia, Pressley said.

Less than one percent of officers who test to become a drug recognition expert test actually qualify, he stated.

Outside of the department, the Senior Patrol Officer is a member of the West Georgia Auburn Club, the Mason and Shriner clubs and coaches “Game On” fast pitch travel ball for 16-year-old athletes.

This fall, Pressley also helped coach a softball team for the Special Olympics Games in October.

“The kids run up to you, give you a hug, or a high five. You can … see how much fun they were having,” he said. It didn’t matter if they lost one game. They were all winners … It meant a lot to me to help coach them.”

Not once did anyone at the games stare or ask Pressley about his missing ear, he said.

He hopes people realize what makes them different can also help them achieve their dreams.

Pressley plans on graduating from college and would like to eventually become a law enforcement field training officer or school resource officer.

Pressley helps an athlete with his hitting stance. The LPD officer helped coach a softball team for the Special Olympics this Fall. He also coaches a girls fast pitch travel softball team during his off time.

http://lagrangenews.com/wp-content/uploads/sites/37/2016/10/web1_Garrett2.jpgPressley helps an athlete with his hitting stance. The LPD officer helped coach a softball team for the Special Olympics this Fall. He also coaches a girls fast pitch travel softball team during his off time.

LaGrange Police Senior Patrol Officer Garrett Pressley works on a report inside his patrol car on Friday. The officer was born without a left ear or jaw bone, but that never deterred him from achieving his childhood dream of becoming a police officer.

http://lagrangenews.com/wp-content/uploads/sites/37/2016/10/web1_Pressley3.jpgLaGrange Police Senior Patrol Officer Garrett Pressley works on a report inside his patrol car on Friday. The officer was born without a left ear or jaw bone, but that never deterred him from achieving his childhood dream of becoming a police officer.

LaGRANGE — A woman is behind bars in the Chambers County Jail accused of robbing and murdering an Alabama man.... read more