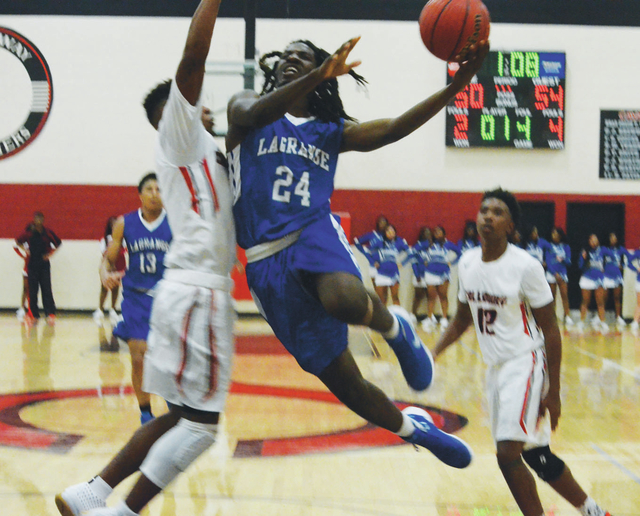 LAGRANGE – They made ‘em work for it.

The Sandy Creek Patriots had their hands full with the LaGrange Grangers on Friday night at Callaway Stadium.

LaGrange’s defense, which has struggled at times this season, delivered an inspired effort, but it wasn’t enough to keep Sandy Creek from walking away with a 28-6 victory in the Region 5-AAAA showdown.

LaGrange, which still has an outside shot at earning one of the region’s four playoff spots, will look to end the regular season on a winning note when it hosts Chapel Hill on Thursday.

If LaGrange beats Chapel Hill, and Cedartown loses its final two regular-season games, there would be a three-way tie for fourth place in the region.

For much of Friday’s game, LaGrange had a realistic chance of stealing one away from Sandy Creek.

Trailing 21-6 in the fourth quarter, the Grangers twice drove deep into Sandy Creek territory before turning the ball over.

After a long interception return, Sandy Creek finally put it away with a touchdown with less than two minutes remaining.

Senior Coy Tedescucci, who started on the offensive line and defensive line, was proud of the way everyone competed.

“Taking the loss, it’s always rough,” Tedescucci said. “But I feel like we fought our butts off tonight, we really did.”

In a bit of a surprise, LaPerion Perry played the whole game for the Grangers.

Perry, LaGrange’s senior quarterback, was injured late in last week’s game against Troup, and he didn’t practice at all during the week.

A few hours before the game started, though, Perry told head coach Dialleo Burks he was willing to play.

“He wasn’t going to play until 5:30 today,” Burks said. “He walked in and said coach, I’m going to give it a go. And I think if it was anybody else, they probably wouldn’t have played one quarter, if that. And he battled through the whole game.”

LaGrange moved the ball well throughout the night.

While Perry’s running ability was limited because of the injury, LaGrange had success in the passing game, with Jamari Trash, Amad Ogletree, DeAnthony Rachel and Bo Russell all catching passes.

LaGrange was hurt by turnovers, though, with each of its final three possessions ending with an interception.

That the Grangers were in the game as long as they were was a credit to the defense which managed to hold the Patriots at bay much of the way.

“That was the best game they’ve played,” Burks said. “We’ve had a lot of points placed on us. For them to come out and play like that, it’s a good job by our defensive staff, a great job.”

The game couldn’t have started any worse for LaGrange, with Sandy Creek’s Drezyn Parson taking the opening kickoff and returning it for a touchdown.

The Grangers hung in there, though.

The Grangers made it to the Patriots’ 21-yard line on their first possession, but they came away empty following a missed field goal.

On LaGrange’s second possession, it drove 62 yards for the touchdown.

Ogletree had a 31-yard run to put the ball in Sandy Creek territory, and Perry capped that drive with a 4-yard scoring pass to Trash.

The extra point was missed, and Sandy Creek led 7-6 with 3:25 left in the opening quarter.

In the second quarter, Sandy Creek’s Mychael Jenkins returned a punt to the LaGrange 10-yard line.

Two plays later, Parson scored on a 5-yard run, and the lead was 14-6, which was the score at the half.

On Sandy Creek’s first possession of the second half, Lamarcus Brown got to the quarterback and forced a fumble, and Jonathan Olajubutu pounced on the ball.

The Grangers were unable to take advantage of that turnover, though, and they gave the ball back to the Patriots following a failed fourth-down play.

With 19 seconds left in the third quarter, the Patriots extended the lead when Jaelen Green scored on a 3-yard run, and it was a 21-6 game.

On their next two possessions, the Grangers made it to the Patriots’ 8-yard line, and to the 40-yard line.

Those two drives ended with interceptions by Jenkins and Tyler Peavy, though.

The Grangers kept coming and made it to the Patriots’ 33-yard line on their final possession, but a desperation heave to the end zone was intercepted.

LaGrange’s Amad Ogletree races downfield after making a catch during the second half of Friday’s game. Kevin Eckleberry | Daily News

http://lagrangenews.com/wp-content/uploads/sites/37/2016/10/web1_LHS2-6.jpgLaGrange’s Amad Ogletree races downfield after making a catch during the second half of Friday’s game. Kevin Eckleberry | Daily News