Man sentenced to life behind bars 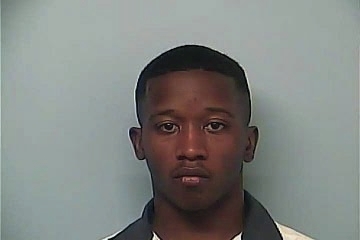 LaGRANGE — A man found guilty of shooting and killing his friend in the parking lot of a liquor store will now start serving a life sentence with the possibility of parole.

Latrell Deshonta Harper, 24, of Lanett, Ala., was sentenced in a Troup County Superior Courtroom on Monday afternoon.

Harper was accused of shooting Willis Bulger, 29, of West Point, during an argument in the parking lot of the West Point Spirits store on June 28, 2014.

The defendant was also on probation for a 2010 aggravated assault conviction, Kirby said. In that case, Harper was convicted of shooting at another person in West Point but did not hit them, according to Kirby.

Harper’s defense attorney, Jamie Thiel Roberts, asked her client only be sentenced to 20 years to serve eight years behind bars.

Blackmon ruled on the side of the state and gave Harper life with the possibility of parole, plus 10 years.

If Harper serves out his full sentence, it will total 40 years behind bars. He would be 64 when he is released from jail.