Callaway pulls away in second half 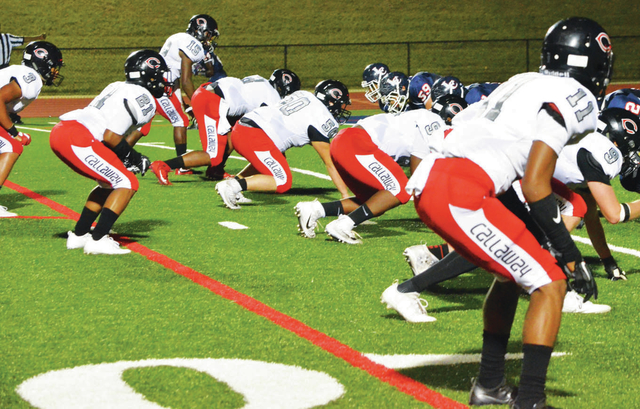 TEMPLE – For the Callaway Cavaliers, the second half has been winning time this season.

Without exception, Callaway has been the dominant team in the second half of everyone of its games this season, and that was the case again on Friday in a Region 5-AA showdown at Temple.

Temple scored a touchdown late in the first half to cut Callaway’s lead to 14-7, and the home team had some momentum heading to the locker room.

In what has been a familiar patteren throughout the season, though, the Cavaliers came out and controlled the action in the second half, and they ended up rolling to a 35-10 victory to improve to 8-0 overall, and 3-0 in the region.

If Callaway beats Spencer at home on Friday, it would wrap up the region championship.

A victory would also give Pete Wiggins his 100th win as Callaway’s head coach.

Wiggins has a 99-39 record since taking over the Callaway program in 2005.

In last week’s game, and this has been another familiar refrain for Callaway, junior running back DJ Atkins had a big night.

Atkins, in his first season at Callaway after transferring from Spencer, has been chewing up opposing defenses all season.

Against Temple, Atkins had 27 carries for 205 yards with two touchdowns, and he has 1,292 yards in eight games this season.

Johnson was efficient, completing 8-of-14 passes for 195 yards with the three touchdowns.

Sanders had three catches for 126 yards, and Freeman caught three balls for 68 yards.

Callaway’s defense was as crisp as always, limiting Temple to a touchdown in the closing moments of the first half and a field goal in the second half.

Callaway’s first touchdown was set up by a Dominic Copeland interception.

After a long run by Atkins into Temple territory, Johnson found Freeman for a 38-yard touchdown, and Noah Stephens made the first of his five extra points to give Callaway a 7-0 lead with seven minutes left in the first half.

Moments later, Callaway recovered a fumble in Temple territory, and that led to an 8-yard scoring pass from Johnson to Freeman, and the lead was 14-0.

It looked like Temple had put its first points on the scoreboard when Treon Wright returned a kickoff for a touchdown, but that score was wiped out because of a penalty.

The Tigers ended up scoring anyway, though, to cut the Cavaliers’ lead to 14-7 heading to the halftime break.

Early in the second half, the Cavaliers had a punt return for a touchdown by Sanders negated by a penalty, but they went on to drive for the score.

Callaway was backed up to its own 10-yard line, and it went 90 yards for the touchdown, with Atkins scoring on a 3-yard run, and with 5:54 left in the third qurater the lead was 21-7.

Moments later, Callaway’s Courtney Williams made a touchdown-saving tackle on a kickoff return when he brought the Temple player down at the 6-yard line.

Temple was unable to score a touchdown, and the field goal cut Callaway’s lead to 21-10.

Callaway put it away in the fourth quarter.

Atkins had a second touchdown run, this one covering about 30 yards, and Johnson tossed a 50-yard scoring pass to Sanders, his favorite target.

Sanders has eight touchdowns this season, with many of them coming from long distance.

Callaway’s DJ Atkins ran for more than 200 yards with a pair of touchdowns during Friday’s win. Kevin Eckleberry | Daily News

http://lagrangenews.com/wp-content/uploads/sites/37/2016/10/web1_CHS3-2.jpgCallaway’s DJ Atkins ran for more than 200 yards with a pair of touchdowns during Friday’s win. Kevin Eckleberry | Daily News