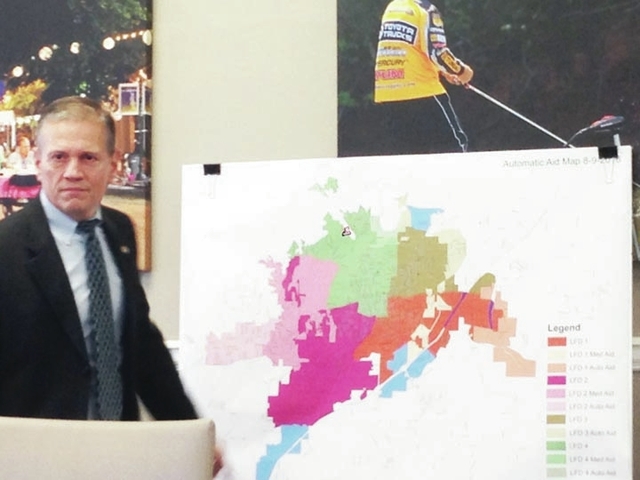 The LaGrange Fire Department currently has four stations that serve the city. Some parts of the city are covered by the Troup County Fire Department instead of the city, thanks to a mutual aid agreement between the departments. However, the city’s continuing growth is beginning to have an affect on fire and medical response times.

“We would love to have a fifth station,” said Dekmar. “… A station that would allow us to provide responses to all those areas (where response times are currently lagging).”

If it is built immediately, the new station is estimated to cost $500,000 to build, including construction and furnishings, and $184,662 to man for the rest of the current fiscal year, which ends in July. Additionally, the new station would require $23,000 for protective clothing for the seven employees who man the station and $7,155 for the promotion of three personnel in order to have an acting officer on duty at the station.

According to Dekmar, the money spent on the new station could save taxpayers money in insurance premiums because of the effect of the Insurance Service Office, which analyzes data using the Fire Suppression Rating Schedule. If the fire department’s ISO rating goes down, homeowners in the area would most likely experience insurance premiums that are two to three times higher due to the increased risk caused by the longer wait.

“Our ISO rating is a two, which currently represents a very small fraction of fire departments throughout the country,” said Dekmar. “… One of the things ISO has as a separate part that concerns me is our response time. Our response time is generally 5 minutes or less in most parts of the city.”

Dekmar told City Council that the fire department may have trouble reaching certain areas in the 7:50 minute response time mandated by ISO standards without the addition of a new fire station and suggested using land already owned by the city on Cameron Mill Road by the water treatment center as a site for the proposed station.

“These stations aren’t that far as the crow flies, but the problem is it’s circuitous because of the roadways,” said Dekmar.

Current areas of concern include Whitaker Road and Country Club Road as well as Hollis Hand Elementary School. If the new station is installed, Dekmar estimates that response times may decrease by as much as 5 minutes for some locations, which may be life or death in some emergency situations.

“My concern – 80 percent of our work is (Emergency Medical Services) – my concern is that we be able to provide that coverage to all areas of the city,” said Dekmar.

Dekmar’s proposal suggested cost saving measures such as using fire department employees with construction experience to help with the construction of the new station. Mayor Jim Thornton said that the city should be able to save money by doing the grading and concrete work itself instead of hiring a contractor for those parts of the construction.

“It seems like a no brainer to me to have a fire station in that area,” said Council Member W. T. Edmondson. “It would really help the people in that area. I would think they would embrace that and love it.”

The city council discussed talking to the neighbors beside the proposed station site regarding the station and possible noise issues. The council also wants to review the budget prior to making a decision on when to install a new station, but the council was unanimous in agreement that a new fire station should be installed.

“I don’t think there is anything more important that we can do then fire and police,” said Thornton. “… Fire and police is something that only the city can do. That’s our charge.”

The city of LaGrange does not currently have money budgeted for a new fire station, but due to a surplus that the city built into the current year’s budget, funding the personnel needed would not be an issue in the first year. However, Thornton did point out that the budget would need to be revised for the following fiscal year to reflect the change of roughly $350,000 annually.

The city council hopes to review the proposal again once it has firm numbers for how the new station will affect the budget.

http://lagrangenews.com/wp-content/uploads/sites/37/2016/10/web1_LAG10262016CityCouncil.jpgLaGrange Public Safety Chief Lou Dekmar explains to the city council what areas are covered and which areas need additional coverage at the city council work session on Tuesday.