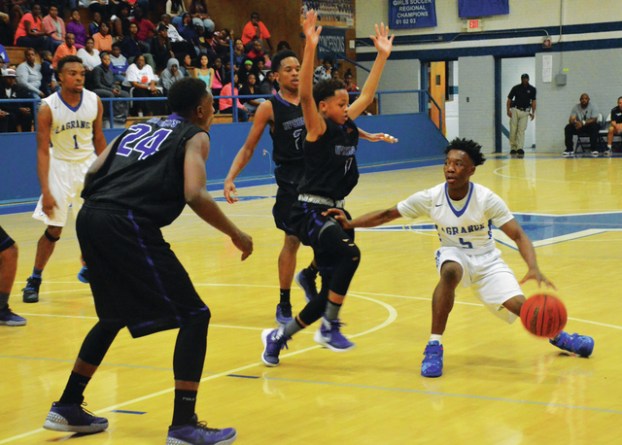 LAGRANGE – He wanted to do his part.

As the LaGrange Grangers began preparing for last week’s game against Sandy Creek, defensive coordinator Marvin Kendricks was looking for a way to solidify the defensive line.

He asked senior Coy Tedescucci, a standout on the offensive line, to play defense against Sandy Creek.

“I came in on Sunday, and coach Kendricks he said, we’re going to put you on a special package,” Tedescucci said. “I said all right. It’s new for me, but I’ll work with it. I came in Monday and said I’m ready to go with defense.”

Tedescucci was part of a defense that delivered an inspired performance, although it wasn’t enough to keep LaGrange from falling 28-6.

Sandy Creek scored 14 points in the first half.

Seven of those points came when Drezyn Parson, who accounted for three touchdowns on the day, returned the opening kickoff for a score.

In the second quarter, Sandy Creek had a punt return to the 10-yard line, and that led to a touchdown.

Sandy Creek scored a pair of touchdowns in the second half, but that LaGrange was in the game as long as it was due in large part to the effort of a defense that has struggled at times this season.

“That was the best game they’ve played,” LaGrange head coach Dialleo Burks said of the defensive players. “We’ve had a lot of points placed on us. For them to come out and play like that, it’s a good job by our defensive staff, a great job.”

Olajubutu had six tackles, as well as a forced fumble and a fumble recovery, and he seemingly spent the entire night in the Sandy Creek backfield.

Senior linebacker Jadarius Young came up big as well with eight tackles, and fellow linebacker Rico Dunn had five tackles before he had to leave the game with an injury.

“Guys were flying around,” LaGrange defensive coordinator Marvin Kendricks said. “It’s happening toward the end of the year, but we’re starting to gel on defense a little bit.”

Tedescucci has been an anchor on the offensive line the past two seasons, and he savored the opportunity to spread his wings a bit.

“I actually did enjoy it,” Tedesucci said. “The very first play, I was ready to go. I love it. I haven’t played defense since the sixth grade. It was fun.”

Tedescucci, who also plays baseball at LaGrange, said he was eager to do his part to help the team.

“It being put on me, and I’m a senior, I needed to step up,” Tedescucci said. “I needed to do something. I just practiced this week, and they just threw me out there in the game.”

Senior linebacker James Clark, in his third game back from an injury, also played close to the line of scrimmage for much of the night, as did Dunn.

Sandy Creek is primarily a running team, and LaGrange’s defensive set-up reflected that.

Late in the second quarter, Sandy Creek had the ball in LaGrange territory as it looked to add to its lead.

Young had a sack on third down, and junior defensive back Bo Russell broke up a pass in the end zone on fourth down.

In the third quarter, LaGrange’s defense came through with a big play when Olajubutu forced a fumble and recovered it.

At that point, the Grangers were only down by eight points, but they were unable to take advantage of the turnover and they gave the ball back to the Patriots.

On the ensuing possession, Olajubutu made a tackle in the backfield on second down, and Pollard got pressure on the quarterback and forced an incompletion on third down, and the Patriots had to punt.

LaGrange had to punt the ball right back, though, and Sandy Creek was finally able to break through for another touchdown to take a 21-6 lead with 19 seconds left in the third quarter.

The Patriots’ next possession ended with an unsuccessful fourth-down play, but they scored the clinching touchdown with 1:50 to play.

Senior quarterback LaPerion Perry played the entire game despite missing the whole week of practice with an injury, and he helped the Grangers keep the chains moving most of the way.

Eight times LaGrange made it into Sandy Creek territory, but it was only able to score once.

On its other trips into Sandy Creek territory, Perry threw four interceptions, there were two failed fourth-down plays, as well as a missed field goal.

LaGrange’s final three possessions of the game ended with interceptions on Sandy Creek’s side of the field.

“You’ve got to finish,” Burks said. “Sometimes you try to do a little bit too much, rather than just take what they give us and keep moving. But that’s a competitor.”

That Perry was even playing was impressive.

He took a big shot at the end of the Troup game and sat out practice, and it looked as though he’d be unable to go.

Shortly before the game, though, Perry told Burks he felt like he could play, and he was on the field for every offensive snap.

“He wasn’t going to play until 5:30 p.m. (Friday),” Burks said. “He walked in and said coach, I’m going to give it a go. And I think if it was anybody else, they probably wouldn’t have played one quarter, if that. And he battled through the whole game.”

On LaGrange’s lone scoring drive, DeAnthony Rachel had a 14-yard catch, and Amad Ogletree had a 31-yard run as well as a 9-yard catch.

On the scoring play, Thrash made the catch around the 2-yard line, and he stretched the ball across the goal line.

Senior Jalen Wilson had a 37-yard catch on LaGrange’s first drive that ended with a missed field goal, and Wilson had a 25-yard reception later in the half.

Wilson, Ogletree, Thrash and Russell all had multiple catches for the Grangers.

While Perry’s running ability was limited because of the injury, he still made some big plays with his legs, including a 39-yard run on third-and-11 early in the fourth quarter.

It wasn’t the outcome the Grangers were hoping for, but Tedescucci said that everyone who stepped on the field gave it everything he had.

“Taking the loss, it’s always rough,” Tedescucci said. “But I feel like we fought our butts off tonight, we really did.”

LaGrange will close the regular season with Thursday’s home game against Chapel Hill.

LaGrange’s short-yardage defense gets in position before a first-half play in Friday’s game. LaGrange’s defense had a strong effort. Kevin Eckleberry | Daily News

http://lagrangenews.com/wp-content/uploads/sites/37/2016/10/web1_LHS9.jpgLaGrange’s short-yardage defense gets in position before a first-half play in Friday’s game. LaGrange’s defense had a strong effort. Kevin Eckleberry | Daily News

LaGrange quarterback and running back Amad Ogletree get ready for the snap during Friday’s game. LaGrange moved the ball well, but it only managed one score despite nine trips into Sandy Creek territory. Kevin Eckleberry | Daily News

http://lagrangenews.com/wp-content/uploads/sites/37/2016/10/web1_LHS32.jpgLaGrange quarterback and running back Amad Ogletree get ready for the snap during Friday’s game. LaGrange moved the ball well, but it only managed one score despite nine trips into Sandy Creek territory. Kevin Eckleberry | Daily News

TEMPLE – The Callaway Cavaliers continued their march toward a possible perfect regular season with a 35-10 road win over... read more