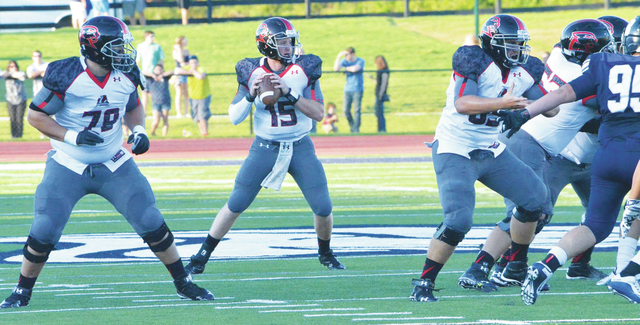 LAGRANGE – They spoiled the party.

The Ferrum Panthers came into Callaway Stadium on Saturday and handed LaGrange College a 44-20 setback on homecoming.

Ferrum dominated the first half, surging to a 34-7 lead, and LaGrange College was unable to get any closer than 17 points in the second half.

With their hopes of winning a conference title likely dashed, the Panthers will focus on finishing the season strong, and they’ll play two of their final three games at home.

LaGrange College will host rival Maryville on Saturday at 1 p.m., and after a road game against North Carolina Wesleyan, it will end the season at home against Methodist.

Saturday’s game was decided in the first half.

Ferrum scored five touchdowns in the first half, while LaGrange College’s usually high-powered offense only found the end zone once in the opening two quarters.

After a scoreless third quarter, LaGrange College scored two touchdowns in the fourth quarter and got within 17 with more than six minutes to play, but Ferrum recovered an onside kick and scored a touchdown to put it away.

LaGrange College’s offense, which has had to adjust to the loss of two veteran offensive linemen to injuries, came to life on an eight-play, 78-yard touchdown drive early in the fourth quarter.

Quarterback Connor Blair, who had been mostly held in check by Ferrum, found a rhythm on that drive, completing six consecutive passes, including a 4-yard completion to Brendon Scott for a touchdown.

Blair also completed passes to Jaylen Turner, Patrick Goodin, Josh Hardrick, Ervens Oge and Kiontai Button on that drive, and the junior quarterback had a 4-yard run right before his scoring pass.

Ferrum answered with a field goal to go ahead 37-14, and LaGrange College’s offense showed off its quick-strike ability with a three-play scoring drive.

After Hardrick had an 11-yard catch for a first down, Oge got behind the Ferrum defense and had a 59-yard scoring reception from Blair.

Any hope LaGrange College had of mounting a comeback was dashed when Ferrum scored to go up by 24 when less than four minutes to play.

LaGrange College’s final possession ended with a failed fourth-down play, and Ferrum ran out the clock.

LaGrange College’s first-half touchdown came on a 56-yard scoring pass from Blair to Marcus Campell early in the first quarter.

Ferrum took over from there, scoring four consecutive touchdowns to build a 27-point halftime lead.

Blair completed 24-of-45 passes for 339 yards with three touchdowns, and Marsalis Jackson had seven catches for 80 yards, while Hardrick had six catches for 53 yards.

For Ferrum, it was all about the running game.

Brian Mann was unstoppable, runnning for 254 yards on 33 carries with a touchdown, and he averaged 7.7 yards per carry.

Fabian Ryan headlined LaGrange College’s defense with 11 tackles, including two for loss with a sack, and Brandon Penn and Demetrius Rodgers each had seven tackles.

Quentin Dixon and DeVarious Smith both had interceptions.

LaGrange College quarterback Connor Blair takes off running near the goal line in the second half. Kevin Eckleberry | Daily News

http://lagrangenews.com/wp-content/uploads/sites/37/2016/10/web1_LC2-4.jpgLaGrange College quarterback Connor Blair takes off running near the goal line in the second half. Kevin Eckleberry | Daily News