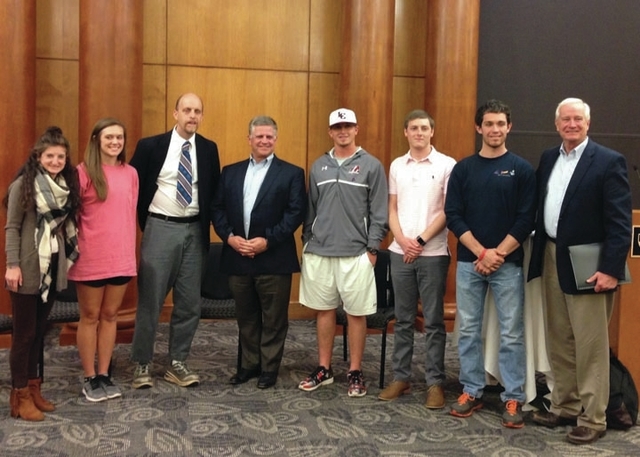 LaGRANGE – LaGrange College was a gathering spot Tuesday for students to speak with potential congressman Drew Ferguson at a town hall event arranged by the school’s political science department.

“I first heard of Drew Ferguson in 2008 when he ran for mayor (of West Point),” said political science Professor John Tures in his introduction. “… He won the (mayoral) election and in 2016 stepped down to run for U.S. Congress, and if Mr. Ferguson is successful, he will be a very rare person indeed in Washington which is someone with medical experience who gets elected to congress.”

Ferguson’s medical experience may prove important as both presidential candidates and members of congress and the senate debate what to do about the flaws in the Affordable Healthcare Act. Ferguson’s experience comes from the dental practice that he has run since graduating from the University of Georgia with a degree in dental medicine in 1992.

The West Point native served on several boards in the community, but he is best known in the region for his accomplishments as mayor.

“It was really a calling to help the community to get involved at the local level,” said Ferguson. “Our community had lost thousands, literally tens of thousands textile of jobs. This whole region and the community that I grew up in, that I loved, changed dramatically. Unemployment had skyrocketed. The human infrastructure of our community had broken down… We just lost a lot of talent in our community.

“…So (my wife) Buffy and I made a decision… either we had to leave our community because of our ability to earn a living there had been so diminished, or we had to stay and fight for it, and about the time that we were thinking about it was about the time that Kia was looking at it, and as it turns out, Troup County and West Point landed that project, and I saw a remarkable opportunity to bring life back to our community, so that is why I ran for mayor.”

Ferguson was instrumental in bringing the Kia plant to the area in 2008, which has brought with it 15,000 manufacturing jobs as well as numerous related plants opening in the area.

During his time as mayor, he focused on continuing that job growth as well as improving upon housing, education, and a sense of place within the community. The results of this focus are immediately visible in downtown West Point through the revitalized downtown and the addition of Point University.

“To have a world class education is probably that holy grail that we are all striving for,” said Ferguson. “… It is not just about the education system, but it’s about the community and what we are feeding into the education system. I heard a speaker say one time, ‘Parents send the best kids they’ve got to school,’ and it’s true. So, an improving school system is also a sign that your community is improving.”

Ferguson served as West Point’s mayor until he heard about Congressman Lynn Westmoreland plans to retire after his current term. Westmoreland has served as District 3’s congressman since 2005 and is known for advocating lower taxes and smaller government.

Ferguson faced stiff competition in the Republican congressional primaries where he went head to head with bigger names from bigger cities, but this small-town mayor gained the following he needed to become the Republican party’s congressional nominee by focusing the bulk of his effort on the people who were most likely to vote for him. In the process, he has learned which issues concern people in this district the most.

Ferguson expressed the desire to work on these problems using the same utilitarian approach that he used as mayor in West Point that allowed him to use compromise in order to move the community forward and get things done.

“I think Jeff (Lukken) and I will share this view: as mayors we learned that we have to represent every view in the community,” he said, referencing former LaGrange mayor Jeff Lukken, who was in attendance at the meeting. “That’s our job to listen to folks we may not agree with and put that into a system to actually get things done and take a pragmatic approach. … I am Republican. I am very conservative on a lot of issues… (West Point) is 60 percent Democrat as far as the vote goes, but we were able to get a lot of things done.”

The LaGrange College event initially was billed as a forum between Ferguson and Democratic nominee Angela Pendley. Pendley wasn’t present at the event Tuesday and could not be reached for a comment on the race.

Ferguson plans to watch the election night results at Coach’s Bar and Grill in West Point. Early voting for the election is available through Nov. 4. Election Day is Nov. 8.