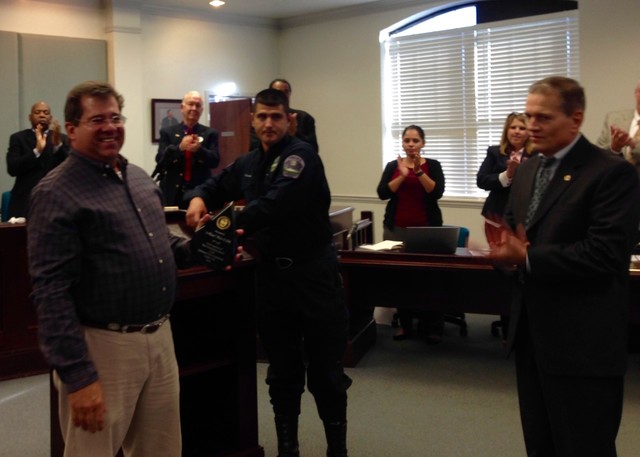 Public Safety Chief Lou Dekmar and K9 Unit Coordinator Officer Joshua Clower presented an award to Dr. William Whitlow, recognizing how he has gone above and beyond in taking care of the dogs that help the LaGrange Police Department do their jobs.

“Dr. Whitlow and his staff play a very big part in (keeping the dogs healthy),” said Clower. “… Emergency visits is an area that is unforeseen, but the things that we ask these dogs to do on a daily basis can a lot of times cause injuries to them, and I know myself personally, I have had to call him three or four times on a Sunday morning at 7 o’clock or Saturday night at 10 o’clock, and there is never any hesitation. He always answers the phone right away.”

The LaGrange Police Department has four canine officers, which gives the department continuous coverage in order to cut down on response times. According to Clower, the dogs are both part of the canine officers’ family and one of their most important pieces of equipment, so their health is a priority.

“In 2015, the unit as a whole, we answered 6,000 calls roughly,” said Clower. “We made roughly 450 arrests as a unit. We helped agencies outside of (LaGrange) roughly 40 times. We conducted roughly 150 tracks as a unit, and as a whole we did 1,500 hours of training, so this dog just becomes a part of your life. It’s like having another child.”

Clower and Dekmar both thanked Whitlow in the meeting.