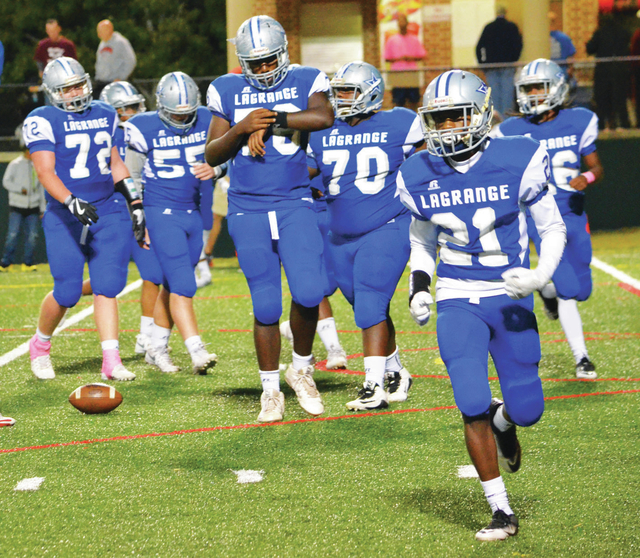 LAGRANGE – There’s a lot that has to go right for the LaGrange Grangers to make the state playoffs.

The Grangers need to win today’s game against Chapel Hill, they need Cedartown to lose its final two games, and they need to come out on top in the tie-breaker.

LaGrange can only control one thing, though, and that is how it plays in tonight’s game.

It hasn’t been the season the Grangers were hoping for, but they’ll try to end the regular season in style with a victory on senior night.

If LaGrange does win, it will sit back and wait and see how it all plays out.

If LaGrange wins tonight, and Cedartown loses out, there will be a three-way tie for fourth place, assuming a winless Central-Carroll team doesn’t suddenly get hot and beat Troup and Sandy Creek the next two weeks.

The tie-breaker would be point differential in games involving the three teams that would be tied for fourth, LaGrange, Cedartown and Chapel Hill.

LaGrange has already lost to Cedartown 27-17, so it is minus-10 in the point differential at the moment.

That means LaGrange doesn’t just need to beat Chapel Hill, it may need to do so convincingly if it wants to win the tie-breaker.

Cedartown and Chapel Hill will close the regular season against each other next week, and Cedartown plays Sandy Creek on Friday.

“We’ve had a really good couple days of practice,” LaGrange head coach Dialleo Burks said. “We had probably our best practice of the year yesterday. That’s saying a lot for these guys with the position we’re in. We’re going to finish this thing, and let the chips fall where they may.”

For LaGrange, LaPerion Perry is set to play in his fourth game of the season after missing the first five games while recovering from offseason hip surgery.

Two weeks ago against Troup, Perry accounted for more than 400 yards and four touchdowns.

Toward the end of the Troup game, Perry took a big hit and was forced to the sideline, and he didn’t practice at all last week.

Despite that, Perry played the full game against Sandy Creek, although he wasn’t as explosive as usual because of the injury.

For Chapel Hill, it’s all about quarterback Jadon Walker.

In an earlier game against Troup, Walker had two touchdown passes, as well as a long scoring run.

“He’s like a LaPerion,” Glisson said. “He does everything. He’s a phenomenal talent.”

Although the Grangers have dropped four straight games, Burks believes they’re poised to do something special tonight, and perhaps in the playoffs if they can get there.

“I’ve got a good feeling we’re going to explode,” Burks said. “We’re gelling a little bit. We’ve got all of our guys back finally. I’m pretty sure a lot of teams don’t want to see us getting in (to the playoffs). We’re that team. You don’t know what to expect. We’re a dangerous team if it works out for us.”

Whatever happens the rest of the season, Burks believes the future of the program is bright.

While the seniors will be missed, many of the top players this season are underclassmen.

Among that group is Andy Boykin, a tight end and defensive lineman who has thrived in his freshman season.

While Boykin hasn’t yet been a big part of the offense on the varsity level, he showed what he can do during a junior-varsity game last week.

Burks said he realized how special Boykin can be during the Cartersville game when he stood his ground.

“I was impressed when we played Cartersville,” Burks said. “Number one team, and it didn’t matter. There was no fear, nothing. That’s how he is in big games.”

Burks said Boykin is part of a freshman class that is extremely tight-knit.

“They’re together,” Burks said. “They do a lot of things off the field together. That’s evident with that freshman group. Every Sunday, they’re on the field doing something to get better. That’s very promising.”

Burks isn’t spending much time thinking about the future, though.

This team still has at least one game to play, and hopefully more.

“We’ve just got to go out and play,” Burks said. “We’re going to mash the gas from the first quarter to the end.”

LaGrange’s offensive line gets in position before the snap during last week’s game against Sandy Creek. LaGrange needs to beat Chapel Hill tonight to have any chance of making the state playoffs. Kevin Eckleberry | Daily News

http://lagrangenews.com/wp-content/uploads/sites/37/2016/10/web1_LHS3-5.jpgLaGrange’s offensive line gets in position before the snap during last week’s game against Sandy Creek. LaGrange needs to beat Chapel Hill tonight to have any chance of making the state playoffs. Kevin Eckleberry | Daily News

Senior Deanthony Rachel (21) and the LaGrange Grangers will look to close the regular season with a win over Chapel Hill at Callaway Stadium. Kevin Eckleberry | Daily News

http://lagrangenews.com/wp-content/uploads/sites/37/2016/10/web1_LHS2-7.jpgSenior Deanthony Rachel (21) and the LaGrange Grangers will look to close the regular season with a win over Chapel Hill at Callaway Stadium. Kevin Eckleberry | Daily News