It’s a one-game season for Cougars 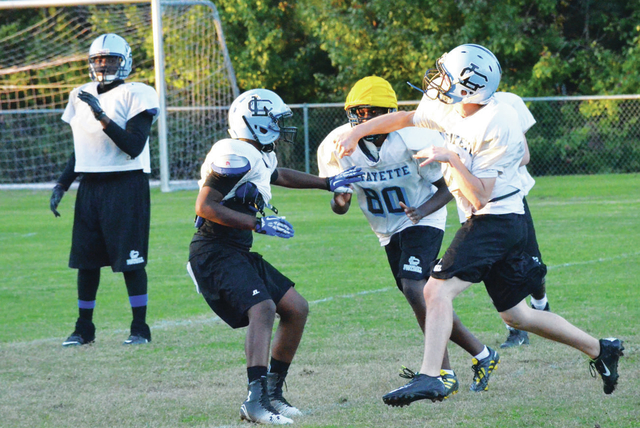 LAGRANGE – It comes down to this.

If the Lafayette Christian School Cougars are going to get a chance to defend their state championship, they’ll have to win a game on their home field Friday night.

Lafayette Christian will host Twiggs Academy at 7:30 p.m. in the regular-season finale, with the winner earning one of the region’s two spots in the Georgia Independent Christian Athletic Association eight-man state playoffs.

If Lafayette Christian loses Friday night, its season is over.

“It’s a playoff game,” said Glenn Quiggle, Lafayette Christian’s offensive coordinator. “We told the kids, the playoffs start this week. Everybody will be amped up. I’m looking forward to it.”

Lafayette Christian has only played one region game this season, and that was in the opener when it lost to Solid Rock Academy 18-6.

While it hasn’t been the season the Cougars were hoping for, they can still accomplish some big things, as long as they take care of business Friday night.

“The guys are kind of excited,” said Nick Nehring, Lafayette Christian’s defensive coordinator. “It’s a big game, and it means a lot, and maybe we could go into the playoffs on a high note. And we’ll just go from there.”

That the Cougars have struggled at times isn’t surprising considering how many players were lost from last year’s team that gave the program its first state title.

Ten seniors, all of whom were key contributors, graduated, and that included Eli Shepherd, who is now playing college football at the University of Tennessee-Chattanooga.

The Cougars have also dealt with some key injuries this season, including one to Josh Shepherd that has forced him to miss the past few games.

Shepherd should be ready to go on Friday, and he’ll help solidify things on defense.

“We’ve been trying to build that continuity on both sides, getting those guys to gel,” Nehring said. “We’ve had our moments where we’d looked good. Then you throw those injuries in there, and it’s been one step forward and one step back.”

One of the team’s seniors, defensive lineman Gary Johnson, believes this team has made major strides since that season-opening loss in August.

One of the team’s key players this season has been junior Jacob Lueken, who Nehring said has “really stepped up for us.”

In a loss to Colonial Hills on Oct. 14, Lueken led the team in tackles, and he was also a key contributor on offense as a running back.

“He had a great game, led the team in tackles, made some really big plays for us,” Nehring said. “We’ve had to move him around because of injuries, and the guy has made plays for us. We’re really, really proud of him.”

Nehring said Johnson, as well as senior Job Tendo, did a terrific job on defense against Colonial Hills.

Tendo didn’t begin playing football until his junior season, and he has developed and become a key member of the team.

Lafayette Christian’s offense is led by sophomore quarterback Landon Whitley, who was a driving force on last year’s championship team.

“I don’t know where we’d be without him,” Quiggle said of Whitley.

Coming into the season, Lafayette Christian had a hole to fill at running back, and senior Nick Spitler has filled it nicely.

In a 34-20 home win over Ballard Christian, Spitler ran for more than 100 yards.

Senior Jess Hill has also been an effective running back, and Mitchell Crandall has gotten his share of carries this season.

It’s possible those seniors could be back on their home field after Friday’s game.

This year’s state-championship game will be played at Lafayette Christian’s new stadium, and the home team would obviously love to be there.

If the Cougars make the playoffs, they’ll be one of eight teams participating, meaning they’d need to win twice to reach the championship game.

“I really want to play on our own field for the championship,” Johnson said.

The Lafayette Christian School Cougars are hoping to have plenty of reason to celebrate when they host Twiggs Academy on Friday night. The Cougars need to win to qualify for the state playoffs. Kevin Eckleberry | Daily News

http://lagrangenews.com/wp-content/uploads/sites/37/2016/10/web1_cougars1.jpgThe Lafayette Christian School Cougars are hoping to have plenty of reason to celebrate when they host Twiggs Academy on Friday night. The Cougars need to win to qualify for the state playoffs. Kevin Eckleberry | Daily News