State bids on the line for local runners 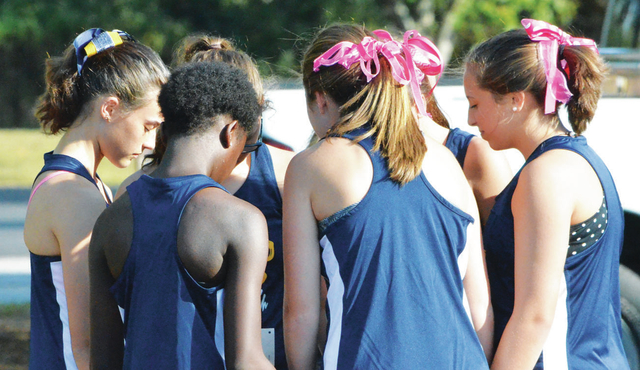 LAGRANGE – The road to state runs through Douglasville.

The Region 5-AAAA cross-country meet will be hosted by Chapel Hill High on Thursday at the Clinton Nature Reserve, and the top teams and individuals will qualify for the state meet in Carrollton.

LaGrange High’s boys’ and girls’ teams are both hoping to finish among the top four on Thursday, which would assure them of a spot in the state meet on Nov. 4.

Troup’s teams will also look to make a strong showing in the Region 5-AAAA meet.

Also on Thursday, Callaway’s cross-country runners will try to make it through to state when they participate in the Region 5-AA meet at Kinnett Stadium in Columbus.

Senior Alaina Tomlinson will lead the way for the LaGrange girls’ team.

Tomlinson, a senior, has had a phenomenal high-school career, and she is looking to make it three consecutive region championships.

Tomlinson won the Region 1-AAAAA meet by a scant one second in 2014, and she had a comfortable 20-second winning margin a year ago.

Tomlinson went on to finish 16th in last year’s state meet, improving on her 23rd-place finish from 2014.

Tomlinson has had a successful senior season, and she’s coming off a fifth-place finish in the Nike/Fleet Coach Wood Invitational earlier this month.

Tomlinson also finished fifth in the Aubrae Gunderson Invitational, she was second in the Carrollton Orthopedic Invitational, and she easily won the county championship at Troup High.

After LaGrange dominated the county championship with seven of the top 10 spots, Tomlinson said everyone on the team has improved.

“Our second runner (Brovoll) has been getting faster, and Audrey just got faster,” she said. “A lot of our team is younger girls. They started out kind of slow, but they’ve gotten better, which is good.”

On the boys’ side, Alex Bowie has had a big freshman season that included a first-place finish in his division at the Aubrae Gunderson Invitational.

Joshua Turman has been a consistent runner for the Grangers this season, and Matthew Callaway, Miller Penn, Donta Dunson, Javid Coleman and Collin Taylor have also run well.

LaGrange had seven of the top 15 spots at the county championship, and Bowie said all of the runners have seen their times drop.

“They’ve definitely got better,” Bowie said. “When we started, I was running 20 minutes, and I’ve shaved like two minutes off of that. And so has the whole team. Now the top five are running under 20.”

Troup’s teams tuned up for the region meet by competing in the Carrollton Last Chance race on Saturday, which was held on the course where the state meet will be.

Catherine Leveritt, who has been an effective runner for Troup, had a time of 24:08 and finished 27th, and Monica Cameron, Abby Barentine, Bailey Turner and Miranda Ahner also competed.

For Callaway, Jason Freiberg has had a solid debut season.

Freiberg has had a number of strong performances, and he placed fourth at the county championship earlier this month.

Emily Rowlett, who was 14th at the county championship, leads the Callaway girls’ team.

OF NOTE: For a look at Lafayette Christian’s cross-country team that will compete in its state meet on Saturday, see Thursday’s sports section.

The Callaway Cavaliers will be in Columbus on Thursday for the Region 5-AA cross-country meet. Kevin Eckleberry | Daily News

http://lagrangenews.com/wp-content/uploads/sites/37/2016/10/web1_running7.jpgThe Callaway Cavaliers will be in Columbus on Thursday for the Region 5-AA cross-country meet. Kevin Eckleberry | Daily News

Alex Bowie and the LaGrange Grangers will try to secure a spot in the state cross-country meet. Kevin Eckleberry | Daily News

http://lagrangenews.com/wp-content/uploads/sites/37/2016/10/web1_running3.jpgAlex Bowie and the LaGrange Grangers will try to secure a spot in the state cross-country meet. Kevin Eckleberry | Daily News

The Troup Lady Tigers will give it their best shot during the Region 5-AAAA cross-country meet. Kevin Eckleberry | Daily News

http://lagrangenews.com/wp-content/uploads/sites/37/2016/10/web1_running5-1.jpgThe Troup Lady Tigers will give it their best shot during the Region 5-AAAA cross-country meet. Kevin Eckleberry | Daily News