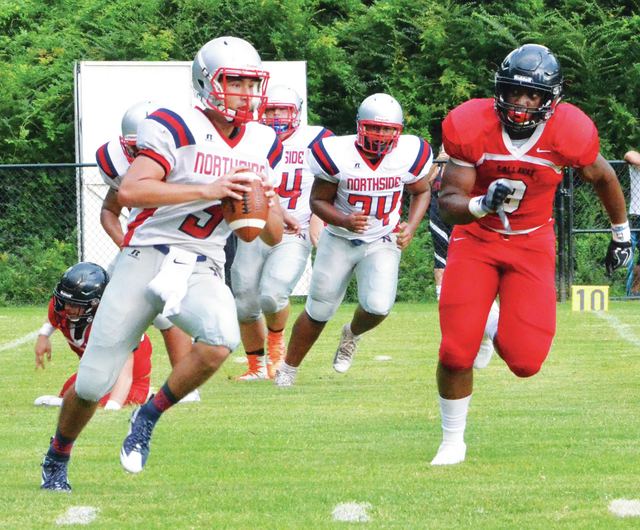 The Callaway Cavaliers are a prolific offensive team, averaging more than 35 points per game.

The Cavaliers have all sorts of weapons on offense, from quarterback Dylan Johnson, to wide receiver Braylon Sanders, to running back DJ Atkins, who had more than 200 yards last week against Temple.

It all begins up front, though.

A secret to Callaway’s success over the years has been the ability of its offensive linemen to shove people off the line of scrimmage, and this year’s group is continuing that tradition.

The offensive line was a bit of a question mark coming into the season with the loss of three key players, including two men who’d been starting for three years.

Whatever questions there were have been answered, though.

Callaway is 8-0 overall and 3-0 in Region 5-AA, and the ability of the linemen to control things up front is a big reason why.

Callaway will host Spencer on Friday with a chance to win the region championship.

“There’s good chemistry there, and they have a good understanding of what we’re trying to do,” Callaway head coach Pete Wiggins said. “And they’re physical guys. They’re fun to coach.”

Wiggins has a special connection to the offensive linemen since he’s their position coach, and he calls them “the foundation of your football team.”

“They have to be unselfish,” Wiggins added. “You play a position where there’s not a lot of glory. But they take a lot of pride in it. They have to be smart guys, tough guys. It’s a grind day in and day out. And I feel like this group has gotten better as the year has progressed.”

The most high-profile player among that group is Jones, who has already received numerous offers from high-profile college programs, including Alabama, Auburn, Georgia and Clemson.

The most recent offer, which came earlier this week, was from LSU.

College teams took notice of Jones before he’d played his first high-school game, and the interest level has sky-rocketed now that he’s shown how dominant a player he can be.

While perfectly happy to be an offensive lineman now, Jones said he group of dreaming of being the guy with the ball in his hands on every play.

“Me being a kid watching football, I wanted to be a quarterback,” Jones said. “I got big, and that wasn’t going to happen. I adapted to it, and now I love it.”

Jones has taken numerous college visits, including one to Clemson earlier this month.

Taking those visits is something he enjoys, particularly because he gets to share those moments with his mother.

“It’s really fun, being able to take my mom places we wouldn’t normally be able to go,” Jones said.

The two seniors on the line are Carter and Hodge.

Hodge is a major contributor on the defensive line, so he’s not a full-time player on offense.

When called upon, though, Hodge is ready to go.

“Wherever you need to be for everybody to be more successful, that’s what you do,” Hodge said. “I started out playing defense in the 11th grade. Now I’m playing both.”

At 170 pounds, Hodge is usually matched up against players considerably larger than he is, but that’s a challenge he embraces.

“You have to want it,” Hodge said. “Anybody who lines up in front of a big 300-pounder and says I can’t block him, or he’s about to blow me up, that’s how it’s going to go down. It’s all about attitude, and heart, and how hard you play. I promise you, if I’m coming off every single play and hitting him, eventually I’m going to have my way with him. It might not happen in the first quarter, but it’ll happen.”

Carter is a newcomer to the program.

Carter transferred from a school in Texas to Callaway for his senior season, and he has settled in and been a key member of the offensive line.

Carter, who goes by the nickname “Big Tex,” said he and his partners on the offensive line head into every game knowing they will own the line of scrimmage.

“Our five, when we’re out there, it’s us against the defensive line,” Carter said. “We try to win that battle every time, no matter who is lined up in front of us. In our heads, we’re going to dominate. We go out there, and we’re hungry for it.”

Moss said a key to the offensive line’s success is the ability for all of the players to work as one.

“When we have everybody working together as a team, when we talk, when everybody is doing their assignments, we feel like we’re unbeatable,” Moss said. “We feel we’re the best offensive line in the state.”

Curtis said he and the other linemen “have a blast,” playing together, and that they’re hoping to keep the season going for awhile.

If the Cavaliers make it to the state-championship game, they could have as many as seven more games to play.

Callaway’s offensive line has faced some major tests this season.

In the first half of the regular season, Callaway played five teams from larger classifications, including a Handley team that is a favorite to win a state title in Alabama.

Thompson said he and the other linemen have enjoyed the opportunity to test themselves against some elite competition.

“It’s been lots of fun,” Thompson said. “Every game, it’s something new, a different challenge we have to overcome. You see our offensive line is under-sized, so we have to work together to get our jobs done.”

Wiggins said all of the linemen are constantly striving to improve and are never satisfied.

“Each Sunday we come and watch film, and we have them grade their own film,” Wiggins said. “I like to see that they’re hard on themselves. Their grade usually matches ours. It’s a good group. They’re a tight group.”

Wiggins added that all of the linemen work well together.

“There’s good chemistry there, and they have a good understanding of what we’re trying to do,” Wiggins said. “And they’re physical guys. They’re fun to coach.”

The tight ends and fullback are also a big part of Callaway’s blocking scheme.

Fullback Jibrell Jackson is having a big season, and Michael Freeman, Lichon Terrell, Everett Duffy and Nathan Sapp have been the tight ends.

“Those guys have all played a lot of reps at tight end,” Wiggins said.

Callaway’s offensive linemen will have their hands full on Friday against a Spencer team with an imposing defensive front line.

“We’ll definitely have to communicate on the line to pick up the blitzes and stuff,” Thompson said.

Jones said everyone is ready to deliver an impressive performance.

“I think it’s going to be one of our best games,” Jones said. “I think it’ll show a lot about how we’re going to play in the playoffs. I’m really looking forward to it.”

Callaway’s offensive linemen look to create an opening for running back DJ Atkins during a game this season. Kevin Eckleberry | Daily News

http://lagrangenews.com/wp-content/uploads/sites/37/2016/10/web1_CHS1-8.jpgCallaway’s offensive linemen look to create an opening for running back DJ Atkins during a game this season. Kevin Eckleberry | Daily News