It’s the end of the road for Grangers 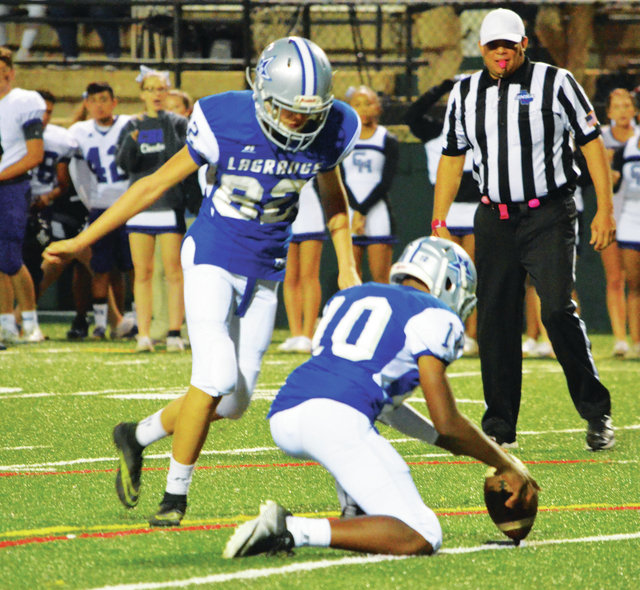 LAGRANGE – A disappointing season came to a heart-breaking conclusion for the LaGrange Grangers.

Needing a win over Chapel Hill to keep its playoff hopes alive, LaGrange ended up falling 26-24 at Callaway Stadium on Thursday night.

The Grangers scored a touchdown with less than 10 minutes remaining, but the two-point attempt was unsuccesful, and the Panthers maintained a two-point lead.

LaGrange forced a punt and drove to the Chapel Hill 31-yard line, but that possession ended when a pass fell incomplete on fourth-and-long with less than two minutes to play.

The Grangers had two timeouts left so they still had a chance to get the ball back, but a penalty gave the Panthers a first down, and they were able to run out the clock.

It’s the end of the road for the seniors, while a talented group of underclassmen will return to lead the way next year.

When the Grangers do get back to work with the offseason program, Burks said “we’ve just got to make sure we keep our group together. Stay firm, stay focused, and know where they want to go. We’ll be OK.”

While LaGrange’s season is over, Chapel Hill (4-4-1 overall, 2-3 in region play) still has a chance to reach the playoffs with a win over Cedartown next week.

For LaGrange, LaPerion Perry had a scoring run and a touchdown pass to Bo Russell, and Cornell Kendrick had a touchdown run in the fourth quarter to get his team within two.

LaGrange also got a 38-yard field goal from Matt Rainey at the end of the first half to make it a 19-11 game.

While the Grangers did some good things, they were unable to overcome some critical mistakes, most notably the two turnovers that were returned for touchdowns, as well as the penalty at the end of the game that allowed the Panthers to run out the clock.

On their final possession, the Grangers drove from their 18-yard line to the Panthers’ 31-yard line, but back-to-back holding penalties knocked them way back.

On fourth-and-34, a Perry pass fell incomplete, and the Panthers took over at the Grangers’ 40-yard line.

Any chance the Grangers had ended with an unsportsmanlike penalty that gave the Panthers a first down.

“That’s our story this year,” Burks said of the untimely mistakes. “We had a personal-foul there at the end where we had a chance to get them off the field and get the ball back.”

Chapel Hill struck first in the game, with Walker connecting with JT Siekerman for a 29-yard touchdown pass, and it was a 7-0 game with 3:30 left in the first quarter.

LaGrange answered with a touchdown of its own.

Perry returned the kickoff into Chapel Hill territory, and seven plays later, LaGrange was in the end zone.

Perry, after completing a 12-yard pass to Jamari Thrash to put the ball inside the 10-yard line, capped the drive with a 4-yard scoring run.

LaGrange went for two, and running back Amad Ogletree scored to give the home team an 8-7 lead with 38 seconds left in the first quarter.

That’s the way it remained until Chapel Hill scored two defensive touchdowns in the final three minutes of the first half.

LaGrange was on its own 19-yard line when Kyzheyone Burton picked off a Perry pass and returned it for a touchdown, and after a failed two-point try, Chapel Hill led 13-8.

On its ensuing possession, LaGrange drove into Chapel Hill territory.

Perry ripped off a 19-yard run on third-and-long, and a late-hit penalty added on 15 yards, and LaGrange was at the 32-yard line.

Three plays later, though, Chapel Hill’s Tyre Shelton scooped up a fumble and raced 60 yards for the touchdown.

Chapel Hill again went for two and it was unsuccessful, and the lead was 19-8 with 18 seconds left in the half.

The Grangers took over near midfield on the ensuing kickoff, and Perry completed a pass to Thrash at the 21-yard line.

As the half ended, Rainey’s 38-yard field goal split the uprights, and Chapel Hill went to the break with a 19-11 lead.

The Grangers carried that momentum over into the second half.

After a long Perry kickoff return and a penalty, the Grangers had the ball at the Panthers’ 21-yard line.

Perry had a 14-yard run to give the Grangers first-and-goal, and two plays later, he found Russell for a 5-yard touchdown pass.

The Panthers responded with 62-yard touchdown drive that ate up nearly five minutes, and Walker capped that drive with a 6-yard scoring pass to Shelton.

After the teams traded punts, LaGrange took over at the Chapel Hill 42-yard line late in the third quarter with a chance to pull even with a touchdown and a two-point conversion.

On fourth-and-long, the Panthers got pressure on Perry, but he managed to elude the would-be tacklers, and he scrambled and completed a 12-yard pass to DeAnthony Rachel, who made the catch on the sideline and got a foot in as the third quarter ended.

On the first play of the fourth quarter, Perry found Jalen Wilson for a 28-yard completion, and LaGrange had first-and-goal from the 2-yard line.

Perry was tackled for a loss on first down, but he got five yards back on second down, and Kendrick plowed through the defense for a 5-yard scoring run.

The Grangers went for two but were unsuccessful, so the Panthers still led by two.

The Grangers forced a punt, and they began to march down the field toward what they hoped would be the go-ahead score.

Kendrick and Daz Williams were both effective running the ball, and the Grangers made it to the 31-yard line before they were bitten by the penalty bug.

LaGrange was forced all the way back to its 40-yard line to force third-and-34, and Chapel Hill took over after two straight incompletions.

The Panthers got the first down on the penalty, and that was that.