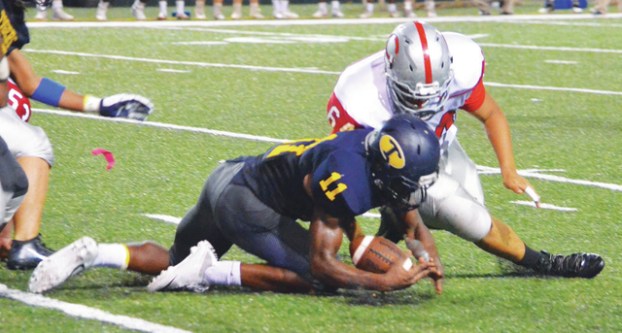 LAGRANGE – With one of the biggest regular-season games in the history of the program looming, the Troup Tigers will first try to take care of business tonight.

Troup, which will play defending state champion Cartersville next week for the region title, will be on the road against Central-Carroll tonight in a Region 5-AAAA game.

It’s a game that has no impact on the Tigers position in the region, but they still have plenty to play for.

Troup (7-1 overall, 4-0 in region play) is going for its eighth straight victory, and that would be the program’s longest winning streak since 2001.

More importantly, the Tigers just want to make sure they play well and take some momentum into next week’s showdown with the unbeaten Purple Hurricanes.

“You win or lose, you’re in the championship game, but you want to go in there with eight in a row and feeling good about it,” Troup head coach Tanner Glisson said.

It’s a game that doesn’t figure to offer a whole lot of suspense, but it’s sports, so you never now.

Central-Carroll, which won 20 games in the 2014 and 2015 seasons combined, has fallen on hard times.

The Lions are 0-8 overall and 0-4 in the region, and they haven’t scored more than 13 points in a game this season.

“We need to go out and enjoy this one, and then get ready for next week,” Glisson said.

The strength of Central’s team is its defense, and it will try to find a way to slow down a Troup offense that has had plenty of success.

Crowe has thrown for a school-record 1,343 yards with 14 touchdowns, and he has also run for 224 yards with four touchdowns.

While the passing game wasn’t as sharp as it usually is in the Cedartown game, Crowe still found a way to get the job done offensively.

Crowe had some big runs, including some where he carried Cedartown’s defenders for extra yardage.

“I though he ran very, very hard on a couple of key runs,” Glisson said. “He’s just a winner. We were going to stick with him, and just ride him.”

Russell has been banged up in recent weeks and hasn’t been at 100 percent, and running back Jackson Davis has been out with an injury, so Carlisle’s contributions have been critical.

“He’s done a good job,” Glisson said of Carlisle. “He’s worked himself into that position.”

Freshman Kobe Hudson has seven touchdown catches this season, seniors Ken Truitt and Chanse Hill have three apiece, and Macenta Stafford has one.

Troup’s defense has been steady all season, and it has been at its best when games have been on the line.

Last week’s game was a perfect example of that.

Cedartown had the lead at the half, but it didn’t score a point in the final two quarters as Troup held on for a three-point win.

A key to Troup’s success has been the excellence of its special-teams units, and Glisson hopes that will help next week against Cartersville.

Also today, the Lafayette Christian School football team will put its playoff hopes on the line when it hosts Twiggs Academy.

If the Cougars win, they’ll earn one of their region’s two spots in the Georgia Independent Christian Athletic Association eight-man state playoffs.

If Lafayette Christian loses tonight, its season is over.

Lafayette Christian is hoping to get an opportunity to defend its state championship.

LAGRANGE – A championship will be on the line at Long Cane Middle School this afternoon. Long Cane and Callaway... read more