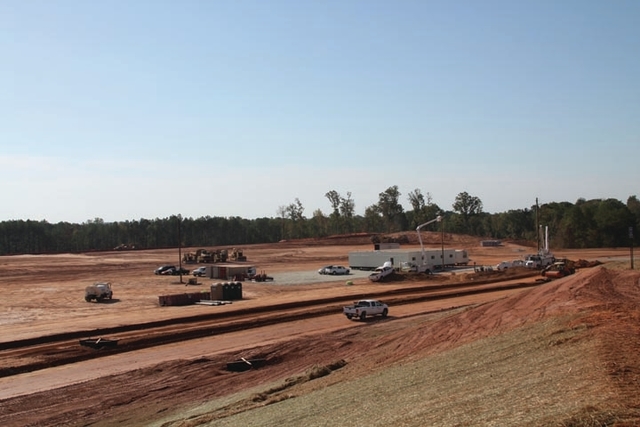 LaGRANGE – Those among us who have the greatest influence on our lives and our communities may leave, but they are never forgotten.

That idea was clearly evidenced at the ceremonial groundbreaking for Tom Hall Parkway on Friday morning as Hall’s family and members of city and county governments joined together to talk about the late LaGrange city manager’s life and accomplishments.

“This was his project and he worked on it for quite a while, and I’m just honored for it to be that way,” said Gina Hall, Hall’s wife. “… I think he would be very humbled.”

Tom Hall Parkway is a joint project between the city and the county that runs along one side of the Great Wolf Lodge development and through the Selig property that is the proposed site for a commercial development that officials hope will attract major retailers to the area.

“Tom’s legacy is his visionary leadership,” said City Manager Meg Kelsey. “Under his watch, the city distinguished itself time and time again. … Tom’s leadership is one of the reasons LaGrange is known as one of the best managed cities in the State of Georgia.”

Hall was the LaGrange City Manager from 1994 until February 2016 when he passed unexpectedly at the age of 54. He played a huge role in projects like the Sweetland Amphitheatre at Boyd Park, the downtown hotel project, and many others.

“During his career, (Tom Hall) impacted just about everything that happened in this area of Georgia,” said Mayor Jim Thornton. “Some people have said that every major project in LaGrange in the last 25 years or so has his fingerprints all over it. …This was one of the last major projects that he worked on, and it was something he felt very strongly about.

“And, so when it got underway – the road construction and the lodge and in the future the construction here on this adjoining property of some commercial development – we see the fingerprints of Tom Hall all around us, and it’s something that the council and I felt was a very appropriate way to honor him – remember his years of service – to dedicate this road project to this memory.”

The road now named for Hall predates the Great Wolf Lodge project and has been credited with making the resort possible in LaGrange. Great Wolf had initially looked at Peachtree City as a possible location, but when they were forced to consider other cities, Hall and Thornton met with developers asking them to consider LaGrange for the project. Hall worked on the project until the day of his death in February.

“The first time (Hall) called me about this project, I went, ‘Wow, that would be pretty impressive if we get there,’ and at first I said, ‘Maybe it’s a long shot, but with Tom in the lead, we’ve got a pretty good shot of getting it,’” said Troup County Manager Tod Tentler. “… This road is 1.45 miles funded by a county-wide SPLOST project. I like to say the staff and the elected officials have envisioned that if we built this 1.45 mile road that we’ll end up with a billion dollars worth of assets one day.”

Tentler thanked voters for the faith that they have put in the city and county officials to fund the road and surrounding projects and for allowing them the flexibility to work around obstacles as they arise.

Part of LaGrange’s Thread Trail is planned to go beside the parkway and lead towards Great Wolf Lodge. The city-sponsored trail system’s master plan was approved by the city council on Sept. 27 and construction is expected to begin on the first two sections in 2017, according to the city council.