‘God put me here for a reason’ 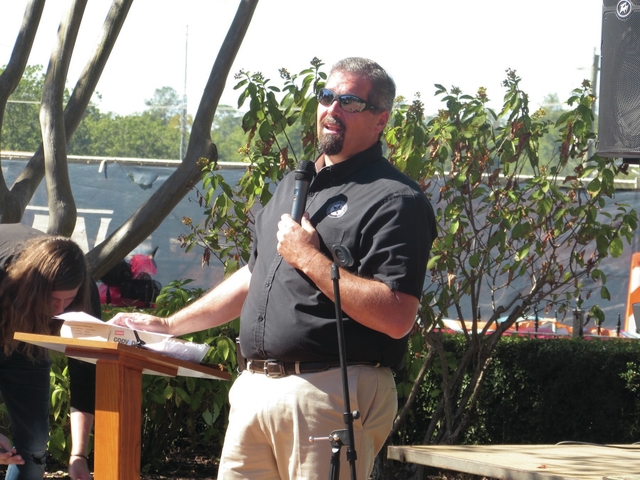 It is not because of his tall stature or informal official uniform as the school resource officer. Rather, it is Johnson’s easy going nature and playful banter with students and staff within the building.

Johnson stands watch in the school’s common area during every class change. Almost 900 students attend Callaway High School and Johnson knows almost all of them by first name.

The students also know him, calling him Deputy Johnson, “Officer,” and even by his first name, Todd. The kids seek him out to shake his hand, give him a high five or just to say hello – and Johnson enjoys every minute of it.

“I try to let them know that underneath this uniform, I am a person and I am also a father,” Johnson explained. “I understand a lot of what they’re going through. I lived it.”

Johnson’s childhood was not easy, particularly after his parents divorced, he said.

“I grew up in the Wood Glen apartments off North Cary Street with my mom and older sister. It was government subsidized housing,” he said. “Kids look at me and say, ‘You?’ And I tell them, ‘Yep.’ I was bullied … then I was the bully. Things that happened to me in school, I did to others. I hurt people’s feelings and I regret that.”

Johnson draws upon those experiences to inspire people going through tough times.

He shares his personal story and knowledge gained as a TCSO deputy about gangs, bullying and drugs with local organizations during speaking engagements. Recently, the deputy was the guest speaker at the Break Every Chain event in LaFayette Square on Oct. 23. He provided hope for those recovering from alcohol and drug addictions.

But maybe most importantly, Johnson shares his childhood experiences to mentor the students he keeps watch over five days a week, seven hours a day.

“I’ve got 890 kids that watch every move I make. The standard is a little bit higher for me,” Johnson explained. “I consider them ‘my kids,’ no matter what race, sex, national origin, or socio-economic status.

“When an event happens involving a student, I ask them, ‘What can you do to make a better decision?’ I try to show them (students) there are alternatives and other ways to make good decisions … My job is not to scare kids. It is to build a relationship with them and build relationships between the Troup County Sheriff’s Office, the Troup County School System and the community,” he added.

Johnson said he keeps his phone on 24 hours a day, seven days a week. He tries to go above and beyond what is required of him as a school resource officer.

“If it helps one child get through a problem, I’ll do it,” he stated. “They (students) want to see a familiar face and know there is a way to change and make things better. If it wasn’t for the role models in my life, it could’ve been me trying to get a pill bottle out of my hand.”

Johnson credits God, his uncle and his mom for giving him strength to endure the tough times in his life.

“God gave me an incredible mother. She taught me no matter what God puts you through, he’s got a plan for you,” Johnson said, his voice thick with emotion.

The deputy paused to wipe tears from his eyes.

“I watched her work 10 to 14 hours a day, six and seven days a week,” he continued. “She never complained. I never heard her ask, ‘Why me?’ Her strength gives me strength … She was the first woman I ever loved and she was my best friend. She’s been gone three years now … I miss her every day.”

But the wisdom she left behind remains with Deputy Johnson. It is the same wisdom he shares with his “children” inside the hallways of Callaway High School.

Troup County Sheriff’s Office Deputy Todd Johnson types up a report inside his office at Callaway High School. Johnson is also a school resource officer. He provides protection for the school but enjoys mentoring the students too.

http://lagrangenews.com/wp-content/uploads/sites/37/2016/10/web1_Johnson1.jpgTroup County Sheriff’s Office Deputy Todd Johnson types up a report inside his office at Callaway High School. Johnson is also a school resource officer. He provides protection for the school but enjoys mentoring the students too.

Deputy Todd Johnson speaks in front of a packed crowd on LaFayette Square during the Break Every Chain event on Oct. 23. Johnson has been a guest speaker for local agencies and churches and provided crucial information on topics such as bullying, gangs and addictions.

http://lagrangenews.com/wp-content/uploads/sites/37/2016/10/web1_Johnson2.jpgDeputy Todd Johnson speaks in front of a packed crowd on LaFayette Square during the Break Every Chain event on Oct. 23. Johnson has been a guest speaker for local agencies and churches and provided crucial information on topics such as bullying, gangs and addictions.