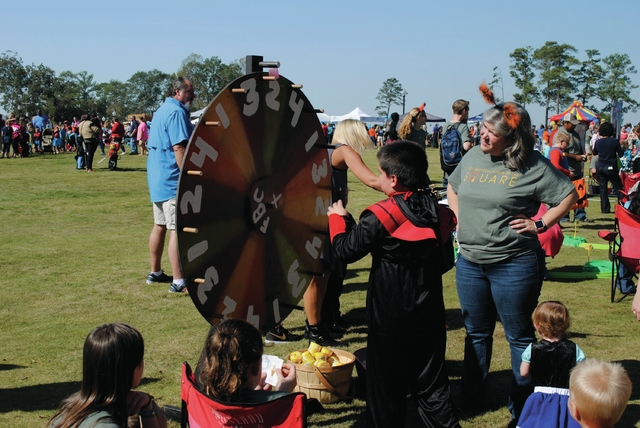 LaGRANGE – Saturday afternoon at Sweetland amphitheater was buzzing with costume-wearing children, folks eager to eat scrumptious chili, fun games to play for hundreds of enthusiastic children, and plenty of sweet candy to be passed around. It was a perfect day for the 27th annual chili cookoff, along with other popular events like the children’s costume contest, trick or treating, and a countless number of fall festival games to play. Fall festival games available for children this year included a bounce house, putt-putt golf, a spin-the-wheel game, throwing bean bags through a hole, a game called “Conk the Crow” where kids toss a small bean bag to attempt to knock over a standing crow to land a prize, picking a rubber ducky from out of a children’s-size pool, airbrush tattoos, and a clown was there to make balloon animals. There was a ton of chili being stirred up at mutliple booths at Sweetland. Organizations and businesses inlcluding American Home Shield, Charterbank, Express Employment Professionals, F.L.I. (Family Lifestyle Investment), Trek Racing Team, Rosemont on Mission, Unity Baptist Church, Phase 2 Salon, and the West Georgia Auburn Club, which featured a cardboard poster of Auburn Tigers head football coach Gus Malzahn in front of its booth. Winner of the Best Chili went to F.L.I. (Family Lifestyle Investment). The People’s Choice for Best Chili was awarded to Charterbank. Best Decorated Booth honors were taken home by American Home Shield. Excitement then shifted over to the children’s costume contest on the Sweetland stage. There were children dressed as characters like Batman, Elvis Presley, Tinker Bell, Bilbo Baggins from The Lord of the Rings movies, Dorothy from The Wizard of Oz, football player Cam Newton, the ghost from Charlie Brown, Mario, Hermoine Granger from the Harry Potter series, a grim reaper, and Lucy from I Love Lucy. The boys overall champion of the Custome Contest was a boy dressed as Edward Scissorhands, the character actor Johnny Depp played in the 1990 film. The girls overall champion went to a girl wearing a Little Old Lady costume while also using a walker. Trick or treating topped the day off in the Sweetland parking lot. There was a lengthy line of parents with their children going from vechicle to vechicle of different LaGrange businesses and organizations as they passed out candy.