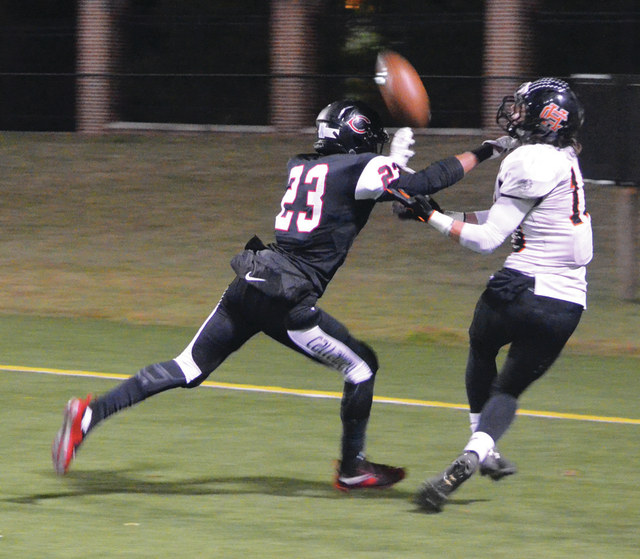 LAGRANGE – With a region championship in hand, the Callaway Cavaliers are ready to chase the big prize.

Callaway wrapped up the Region 5-AA title with a 36-14 victory over Spencer on Friday night at Callaway Stadium.

Callaway (9-0 overall, 4-0 in region play) still has one more goal to achieve in the regular season, though.

If Callaway beats Jordan at home on Friday, it would complete the first unbeaten regular season in the history of the program.

Then it’ll be time to begin what the Cavaliers are hoping will be an extended stay in the state playoffs, and they’ll be at home in two weeks for a first-round game.

Winning region titles is nothing new for Callaway.

Since 2008, the Cavaliers have won six region titles, and they’ve won four in the past five years.

Only a wild 40-34 loss to Central-Carroll on the final day of the 2014 regular season kept Callaway from making it five consecutive region titles.

Over that five-year stretch, by the way, Callaway has a 48-11 record, and there are almost certainly more wins to come this year.

As for this year’s team, winning a region title was far from a sure thing when the season began.

The Cavaliers lost some key seniors from last year’s team, and the coaches were going to be counting on some unproven players to occupy key roles.

It has all come together nicely, though, and the Cavaliers have cleared every hurdle.

Spencer is a talented team and it brought a 3-0 region record into Friday’s game, but it was no match for Callaway.

The Cavaliers surged to a 22-0 lead in the first half, and they were never seriously challenged after that, although the Greenwave did keep things somewhat interesting.

When quarterback Dylan Johnson kneeled down for the final time and the clock hit zero, the Cavaliers had another region title, and Pete Wiggins had his 100th win as a head coach.

While there is obviously plenty the Cavaliers still want to accomplish, they savored the moment and spent plenty of time on the field after the game.

First, the region-championship trophy was presented to the team, and then Wiggins was honored for his accomplishment with his family there to enjoy the moment with him.

One of the team’s seniors, linebacker Travis Traylor, said it was “very satisfying” to achieve the goal of winning a region title.

“We’ve put all the work in,” Traylor said. “We didn’t know what the competition was going to be like (in the region), so it’s very exciting to come in and win, and be the best in our region.”

Added junior cornerback Courtney Williams, who had a big game that included an interception, “we put a lot of hard work into this. Hard work pays off.”

Spencer was a worthy opponent.

Spencer came into the game 6-2 overall and unbeaten in the region, and it was coming off back-to-back shutout wins over Temple and Lamar County.

Spencer did some nice things in Friday’s game.

The Cavaliers were clearly the better team, though, winning in all three phases of the game.

While Spencer kept hurting itself with mistakes, including a number of untimely penalties and some back-breaking turnovers, Callaway played its usual crisp game.

Callaway was already ahead 16-0 when a Spencer player attempted to field a kickoff near his goal line.

He lost control of the ball, and Callaway’s Tely Fanning pounced on it in the end zone, and it was a 22-0 game.

Spencer hung tough and got within 15 points in the second half, but the outcome was never seriously in doubt after Fanning’s touchdown.

Callaway’s defense did a terrific job.

Thomas threw the ball a lot, and Callaway’s defensive backs were up to the challenge, and Williams and Dominic Copeland both had interceptions.

It was Copeland’s interception on Spencer’s opening possession that set up Callaway’s first touchdown.

Copeland’s pick gave the Cavaliers the ball deep in Greenwave territory, and two plays later, DJ Atkins scored on a 4-yard run and it was a 6-0 game.

After Spencer’s next possession ended with a punt, Callaway took over near midfield.

The Cavaliers were facing third-and-long when offensive coordinator Matt Napier opened up the play book.

Quarterback Dylan Johnson threw a backward pass to Braylon Sanders, and as the defense converged on him, he threw a pass to Atkins, who was wide open, with about 20 yards of clearance between himself and the closest defender.

That turned into a 57-yard touchdown, and Noah Stephens made the extra point, and Callaway led 13-0 with 7:44 left in the opening quarter.

Following another punt, Callaway chewed up nearly six minutes and drove from its own 15-yard line to the Spencer 17 before Stephens made a 34-yard field goal to make it a 16-0 game with 10:19 to play in the half.

Johnson completed a 9-yard pass to Sanders, and on fourth-and-one, Atkins had an 11-yard run for a first down to the Spencer 11.

Callaway lost six yards from there, but the kick was well within the range of Stephens, who made a 42-yard field goal earlier this season.

Already trailing 16-0, Spencer then fumbled the ensuing kickoff, and when Fanning pounced on the ball, Callaway led by 22 points, and it looked like the rout was on.

Spencer responded with an 85-yard touchdown drive, though, and the two-point play cut Callaway’s lead to 22-8 with 5:35 left in the half.

Not wanting Spencer to feel like it was gaining any sort of momentum, Callaway responded with a 65-yard scoring drive that featured a whole lot of Atkins.

There were seven plays on the drive, and six of them featured Atkins.

Atkins had an 18-yard run to put the ball on the 5-yard line, and two plays later, Johnson scored on a 2-yard run, and Stephens’ extra point made it a 29-8 game.

Spencer made it to midfield on its final possession of the half, but Williams ended that threat with an interception.

Late in the third quarter, Spencer scored a touchdown and failed to convert on the two-point try, and Callaway’s lead was down to 29-14.

As they did consisently throughout the game, though, when the Cavaliers needed a big play, they got it.

Sanders, Callaway’s outstanding senior receiver, returned the kickoff to the Spencer 28-yard line, and Johnson did the rest.

On third-and-long, Johnson’s 10-yard keeper gave the Cavaliers a first down, and two plays later, the senior quarterback found the end zone with a 14-yard run.

Spencer had three possessions after that, but it didn’t manage any first downs, and when Callaway got the ball for the final time with a little more than two minutes remaining, Johnson ran three kneel-down plays, and that was that.

Callaway doesn’t figure to have much trouble finishing off a perfect regular season.

Jordan is 0-9, and it has lost each of its four region games by at least 20 points, and that included a 48-8 loss to Jordan last week.

OF NOTE: For more photos from Friday’s game, check out facebook.com/LDNsports

Callaway’s Braylon Sanders makes a tackle during the first half of Friday’s game. Sanders threw a touchdown pass, and had a long kickoff return that set up another score. Kevin Eckleberry | Daily News

http://lagrangenews.com/wp-content/uploads/sites/37/2016/10/web1_CHS28.jpgCallaway’s Braylon Sanders makes a tackle during the first half of Friday’s game. Sanders threw a touchdown pass, and had a long kickoff return that set up another score. Kevin Eckleberry | Daily News