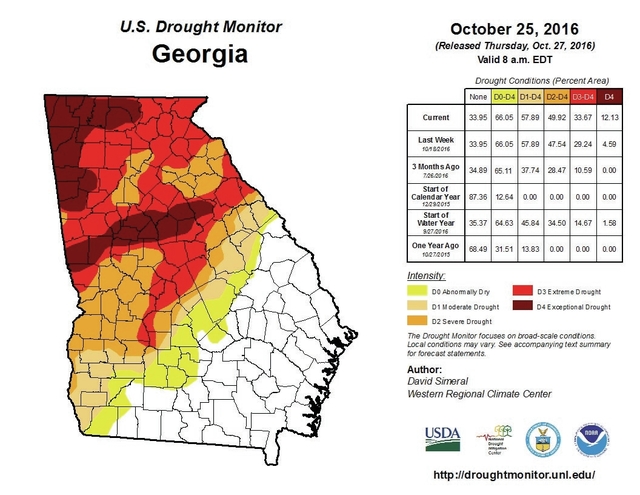 Troup County is currently in a D4 drought which marks extreme drought conditions, according to the National Drought Mitigation Center. The National Weather Service attributes the drought to low rainfall in the area and near the Chattahoochee River’s tributaries this year.

“On October 31 of last year, (West Point Lake was) at 629.6 feet, and in October of last year they topped out at 633 feet,” said Laura Belanger, a meteorologist for the National Weather Service’s Atlanta office. “… We are roughly 7 feet low for this time of year.”

According to the weather service, Troup County has been in a drought since April with a mere 8 to 10 inches of rain in the last 180 days, which is 25 to 50 percent of normal. This lack of rain has had a dramatic affect on lake levels. West Point Lake is currently sitting at 628.66 feet, while the recommended summer level is 635 feet.

The National Weather Service does not currently expect a significant amount of rain for the area, especially as the county enters autumn when there tends to be less rain. This lack of rain has forced the U.S. Army Corps of Engineers to keep a very close eye on how much water can be allowed to flow downstream without being a detriment to the area.

“We have only been releasing the minimum amount for water supply and quality downstream,” said U.S. Army Corps of Engineers spokesman Pat Robbins.

Even with minimal releases, the water levels continue to drop, and according to the National Weather Service, it would take three months of good rain to get out of the drought.

“There are obviously safety issues (because of the drought),” said Robbins “… People just have to be very careful when they are out boating because there will be some obstructions that you wouldn’t see when the lake level was high.”

The corps is required to allow water flow downstream to Apalachicola, Fla., in order to protect endangered species of sturgeon and mussels at the Chattahoochee River’s outlet along the Georgia-Florida line. The requirement has met with wide criticism in the past due to its prioritization of these species over local economies, but unless the requirement is changed, the corps will continue to have to draw on the lake’s reserves to keep the water flowing.

“It is getting to a point now where I don’t think the corps is going to have a lot of choice but to lower the lake levels,” said County Engineer James Emery. “… There are a lot of underwater obstacles and hazards that are coming up because of the drought.”

The Corp of Engineers does try to mark points that could be safety hazards, but as conditions continue to worsen, more hazards are likely to surface. According to Belanger, it may be a dry winter due to possible climate patterns.

“La Nina for the southeast usually means higher temperatures and less rain,” she said, referencing the La Nina climate pattern that scientists have been tracking.

According to the National Oceanic and Atmospheric Association, La Nina currently has a 40 percent chance of developing this year, down from earlier this year, though scientists say that it could still come or even come late. La Nina is predicted by ocean temperatures a half degree below normal. During a La Nina year, winter temperatures are warmer than normal in the Southeast.

Emery said that despite the drought conditions, the corps has done a good job maintaining lake levels needed to allow for recreation during this past summer.

“(The Corps) was able to keep it where it was not as bad as it could have been,” said Emery, noting that the high water levels early in the year did help mitigate some of the effects of the drought early in the year.

Back in January, following the Christmas floods, the lake was 636 feet deep. If it had hit 641 feet, the National Weather Service would have considered the lake flooded.

A dock at Southern Harbor Resort and Marina in Lanett, Ala., currently has a steep decent thanks to low lake levels.

http://lagrangenews.com/wp-content/uploads/sites/37/2016/10/web1_lake-level-1.jpgA dock at Southern Harbor Resort and Marina in Lanett, Ala., currently has a steep decent thanks to low lake levels.

Sailboats on West Point Lake rest at a dock that sits unusually low due to drought conditions in the region.

http://lagrangenews.com/wp-content/uploads/sites/37/2016/10/web1_lake-level-2.jpgSailboats on West Point Lake rest at a dock that sits unusually low due to drought conditions in the region.

Troup County is currently in extreme to exceptional drought conditions due to lack of rainfall this year according to the National Drought Mitigation Center.

http://lagrangenews.com/wp-content/uploads/sites/37/2016/10/web1_lake-level-3.jpgTroup County is currently in extreme to exceptional drought conditions due to lack of rainfall this year according to the National Drought Mitigation Center.